Late last week I, along with a bunch of other local newsie types, received an e-mail announcing some pretty immense news in the ongoing fight against the McMansionization of Arcadia. Add in the ongoing effort to recall 3 especially compromised City Councilmembers, and things have obviously gotten exciting there.

Many Arcadia residents, sick of the dishonesty and widely suspected corruption at City Hall, have now decided it is necessary to take matters into their own hands and, through the use of a ballot initiative, beat down runaway mansionization.

In a city whose government apparently only cares about how much they can take in property taxes and development impact fees, along with such phony nonsense as the Arcadia Association of Realtor's so-called "private property rights campaign" (AAR rule of thumb: the bigger the house, the greater the rights - link), there really isn't any other recourse available.

Here is how that e-mail reads:

Yesterday, a Notice of Intent to Circulate a Petition for the attached Ballot Initiative was filed with the City Clerk. This was a collaborative effort of representatives from the Highlands, Village, Oaks, Lower Rancho and South Arcadia.

In response to the City Council’s 3-2 vote to suspend residential zoning code updates, this committee formed and drafted this initiative.  New single family homes in Arcadia are being submitted at an alarming rate.  165 new homes were submitted in 2014 in Arcadia as opposed to approximately 70 in Temple City, 20 in Monrovia and 15 in San Marino.

Many of the new homes in Arcadia are out of scale and proportion to the neighborhoods.  Arcadia’s codes have no limit on the amount of square footage that can be built on a lot.  This ballot initiative sets limits in line with neighboring, quality cities.  These limits will help protect views and privacy and preserve property values.

The Pasadena Star News has been covering the Arcadia beat pretty closely, and they published the following account last Friday. 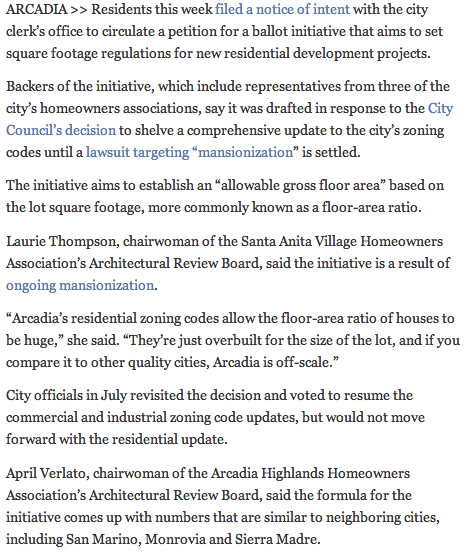 Nice to see Sierra Madre's success in defeating mansionization acknowledged. The rest of this Pasadena Star News report can be read by clicking here.

Pretty exciting times in Birdtown. Here is how the "notice of intent" sent to Arcadia's City Clerk reads. 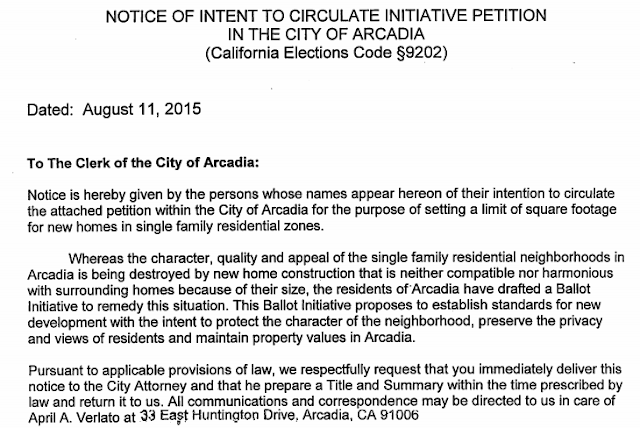 After years of having to listen to some of the most inane kinds of crap imaginable (link), it is great to see that the people of Arcadia have finally had their fill and are fighting back.

Not that they had much of a choice.