It is kind of funny, or at least it is in an unfunny sort of way. Sierra Madre, which had city leadership that for years proudly proclaimed itself to be the greenest of the green, and even pushed a "Green Committee" into existence despite wariness from certain skeptical portions this community (like me), is one of a relative few cities in the area using only the most minimal amounts of solar power for its buildings and facilities. Which might seem baffling to some when you consider the vast amounts of global warming hot air put out on this very topic a few years back by then Mayor John Buchanan.

What makes this especially irritating is that we will soon have to endure a third City Hall mandated campaign to raise utility tax rates in this city because of what they claim are cash shortfalls. Despite the twice voted wishes of the people of Sierra Madre that City Hall learn to live on a 6% UUT budget, all indications are that three politicians on the City Council will soon be asking for twice that amount. Which would put the Foothill Village into its very own highest utility tax bracket in California.

And for whose benefit? Certainly that list would have to include Southern California Edison (link). Here are some bills from Fat Eddie that were processed through the City Council earlier this year. Please note that between January 13 and February 24 of this year alone the City of Sierra Madre sent Edison $109,087.00 in taxpayer dough. Authorized at just three City Council meetings.

$109,087.00 in just six weeks is a lot of cash. By my rough estimate, and when you include all of the Water Department and lighting district electric bills, the total amount of cash Sierra Madre will send to dirty power giant Southern California Edison this year alone will be somewhere in the one half to three quarters of a million dollar range. With only very minuscule solar power offsets.

A pretty sweet deal for Edison. For you? Not so much.

Sierra Madre's governmental hostility to solar power didn't just stop at City Hall's doors. According to an article published on the Sierra Madre Patch site (of all places) back in June of 2011, the city was also actively discouraging solar power usage on private homes by charging people exorbitant fees (link).

Are High Fees Stifling Solar Power in Sierra Madre?
A report released Monday by the Sierra Club shows that Sierra Madre is charging fees for the installation of solar panels that are among the highest in Los Angeles County.

The report shows that the permit fees charged by the city for rooftop photovoltaic systems on commercial buildings are particularly high, relative to the other 89 Southern California cities included in the survey.

In fact, at a cost of $37,349 per 131 kilowatt commercial system, Sierra Madre currently has the third highest fee of all the cities surveyed, topped by only Inglewood and Rolling Hills Estates.

It took a City Council meeting and some unhappy residents to fix that one. Solar fees then came down.

So how can Sierra Madre get out from under Edison's huge electricity bills, while also losing its rep as a dirty power city?

I have a couple of ideas. This first article comes from The Denver Post. It sheds some light on what can be done by government agencies that have all of the necessary clues, and the wisdom to put them to use. 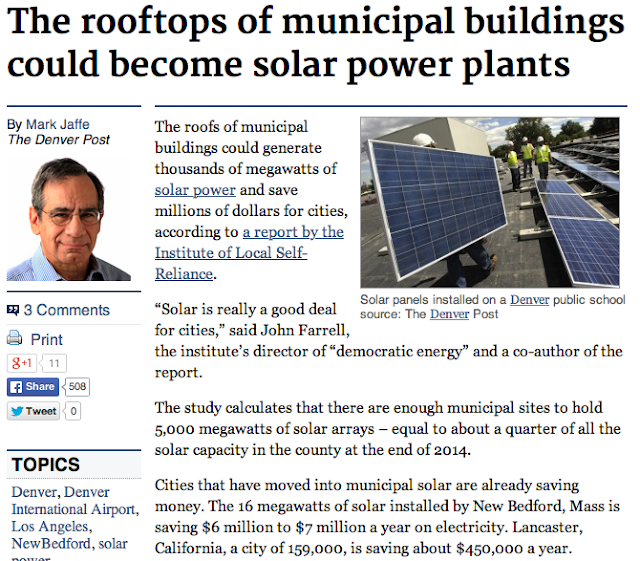 The rest of this article can be linked to here.

There was a story that ran a while back on the Weather Channel webpage (link) called "Solar Panels Save the Music for Calif. School District." Also interesting. 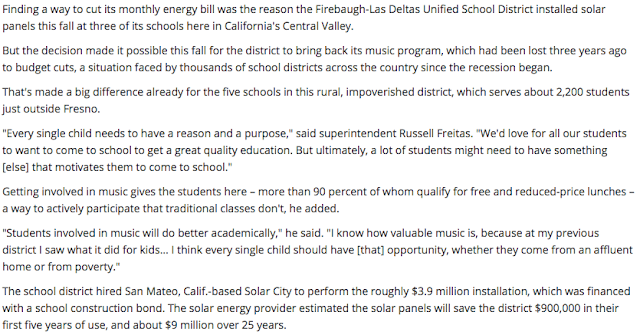 You have to wonder why Sierra Madre, a city that proclaims its greenness when given the chance, and has its very own EENER Commission no less, never got on board with solar power for its municipal buildings and facilities.

And maybe we should ask exactly who it was that stopped it.

My guess is it has a lot to do with the strong sway Southern California Edison has enjoyed at Sierra Madre City Hall for the last decade or so. Typified by the eight year City Council reign of Edison employee John Buchanan.

The dirty power giant is at war with solar power providers because even they know that both their antiquated business model and energy monopoly are at risk. And according to energy expert Matt Niswonger, the stakes are high (link):

In California, approximately 70% of the electricity we buy from PG&E and Southern California Edison is derived from fossil fuels. This dirty power accounts for the vast majority of our annual carbon emissions, which in 2014 are projected to reach 40 billion tons globally—another all-time high.

There is also this question. Am I the only one who finds it offensive that the city believes it has to double utility taxes in order to pay for things like its exorbitant Edison bills, while at the same time not lifting a finger to do anything about it? Or, perhaps worse, even collaborating with Edison to keep solar power off Sierra Madre municipal buildings?

Especially when solar power is the far cheaper, and environmentally friendly, way to get the job done?

My guess is the city sold us out to Edison. Now they want to raise your utility taxes to help pay for it.