You have to wonder if perhaps Bruce Inman is asking, in a round about and rather passive aggressive way, to be retired. And if that is the case, judging by the frustrated reactions of the City Council to Bruce's performance last night, he just might get that wish. And sooner than we even know.

Due to the sunsetting of the UUT, making this a time when money is truly the most troubling issue the City Council has to deal with, Bruce continues to only offer solutions that require the spending of lots of it. Last night was no exception, with the amount asked this time being $28,250. No alternatives to that number were offered by the Director of Public Works, though clearly some could have been.

Last night's Special Meeting of the Sierra Madre City Council was originally supposed to be one item only, and expected to last all of 15 minutes. It involved a Sacramento concocted UUT collection adjustment that expands the confiscatory reach of City Hall to tax a previously untouched category of cell phone service. The vote on this item was a legal formality, one that was quickly held and unanimously passed.

However, on August 13 an important connection to the San Gabriel Valley Municipal Water District, which is a large pipe, sprang a leak. And since the SGVMWD is now the sole source of water for Sierra Madre, it is a serious problem. Temporarily patched, the financing for required permanent repairs was added to the agenda, and at the last moment.

Now there is budget in existence that would cover that amount of money, but can be spent only if the City Council first votes its approval. And given the emergency nature of this problem, a serious rupture in the line where SGVMWD water is piped into this city's system, it was obvious to all attending that the work needs to be done.

But the devil is in the details, so let's take a look at the Staff Report (link).

On the surface this all looks fairly standard, but you need to know a little more. Perry C. Thomas Construction is the same company that did the original work, and that took place just two short years ago.

Here is some more to chew on: 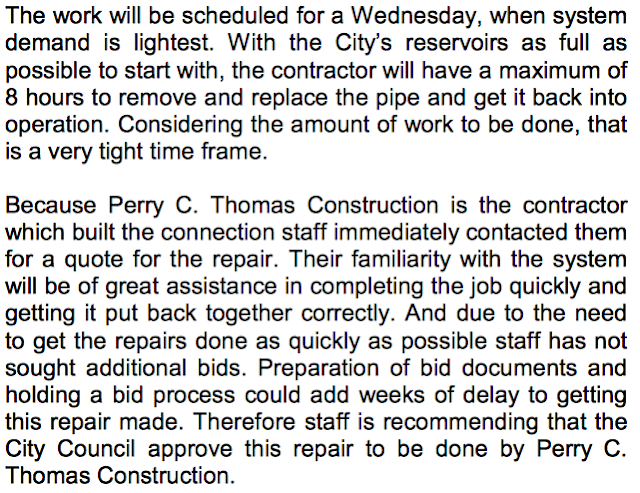 So here's the problem as I see it. As I said above, Perry C. Thomas Construction is the company that built all of this two years ago. Therefore they could be held at fault for any failures causing this line to spring a leak. Traditionally the company that does the job is responsible for their work. And according to the City Attorney, for a period of four years. Well within the time frame we're discussing today.

Yet Perry C. Thomas is the only company Bruce Inman called. No inquiries were made to any other companies that do such work, nor were any answers as to why this problem might have happened sought. Instead, claiming time was of the essence and that no other possible remedy could be considered, Bruce made just the one call, and that was to the very people likely responsible for the failure.

And so you know, the amount paid to Perry C. Thomas for their original work on this project was in excess of $500,000. An awful lot of money, even for government. The stated purpose being to link Sierra Madre to a viable water source.

This amount was paid by the SGVMWD and not the City of Sierra Madre, but you know the drill. The source of all such funding comes from just one place, that being the pockets of you and I.

It seems to me that a City Director more engaged with his job would have called Perry C. Thomas Construction and asked them to come out and take a look at the sad state of their work. And once there demanded that they explain why this leak occurred.

Certainly holding them financially responsible for any needed repairs is not an unheard of practice. As it is Perry C. Thomas Construction would stand to profit by their failed work. You have to wonder if they believed they would get away with that.

When asked by the City Council last night why this failure occurred, Bruce admitted he didn't really know. But since he only made that one phone call, this is not very surprising.

Councilmember Gene Goss boiled it all down. Gene compared this to a plumber installing a bathtub at his house. If the tub springs a leak two years later, wouldn't the most obvious solution be to call that same plumber and make him fix his shoddy work? And if that guy can't get the job done, hire someone else and make the original plumber pay the bill?

Pretty standard stuff in anybody's life. A workman is expected to stand by his work, and almost always at no additional cost.

Here is another problem. The firm that designed the system for this SGVMWD hook up is Spencer Engineering. Another company Bruce has done a lot of business with over the years. Wouldn't they have been among the first calls you would have made? In order to find out what happened?

Under questioning from the City Council, it turns out that call has yet to take place.

All Bruce Inman did was make one call, and got a quote from that one company. That being the same company likely responsible for this failure, and therefore beholden to fix the problem at no cost.

Then Bruce asked the City Council for the $28,250 that Perry C. Thomas Construction demanded to repair their own inadequate work. Certainly the people of the City of Sierra Madre deserve better than that.

A clearly exasperated City Council asked Bruce Inman to get them some more answers. We'll see how that all goes.