John Wuo Was Absent From Last Night's Arcadia City Council Meeting. Can This Document Be The Reason?

David Arvisu spoke from the podium at last night's City Council meeting in Arcadia. He had a document to present to the denizens of City Hall that exposed Councilmember Johnny "GemCoins" Wou as being a somewhat less than truthful person. David then proceeded to explain the significance of this document, and in the process nailed the absent Councilmember to the floor boards. You have to wonder if perhaps this was the reason why John Wuo did not attend last night's meeting. He didn't want to face this kind of music.

Wuo has, over the last few months, repeatedly stated that he has no idea of what GemCoins were all about, and that all of those many pictures and videos of him at various USFIA events was him supporting a new business that just happened to show up in Arcadia. Just standing up for the new guys in town so they become happy and successful new businesses.

Arvisu's document however, shows something quite different. Rather than just strangers passing in the night, it appears that Steve Chen, the prime mover behind the GemCoins operation, and John Wou, the Arcadia City Councilmember who knows nothing about that stuff, have apparently been business partners since March of 2014.

Here is the smoking gun: 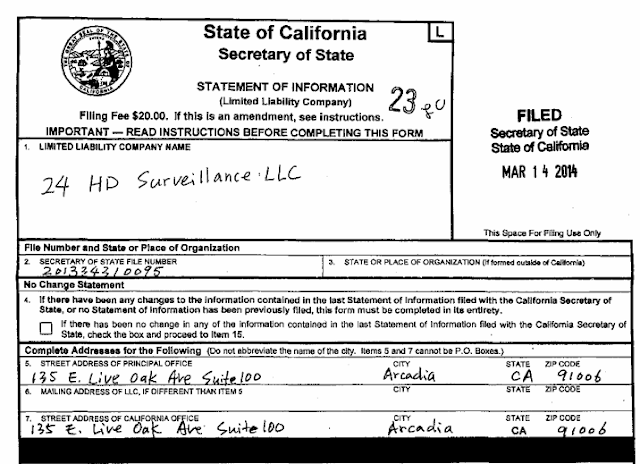 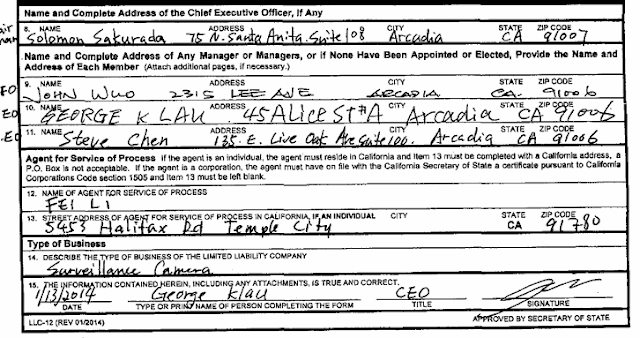 And in case you are wondering, the address Steve Chen gives on this state required LLC form is the address and headquarters of USFIA, the happy home of those world famous GemCoins. Which should mean that his business partner, John Wou, would be quite familiar with the place. Despite all of his claims that he knew nothing about the nature of Steve Chen's business.

The business that Steve Chen and John Wou share is a security service that puts your house under surveillance 24/7. Here is that company's profile courtesy of Bizapedia (link). 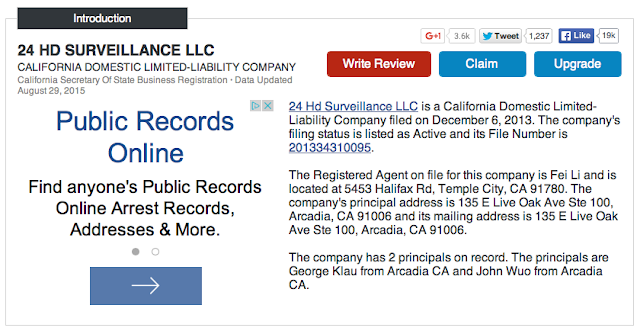 One thing that you might take away from this is that while John Wou and George Klau are the original partners, Steve Chen was invited in as a partner a few months later. And again, Chen's primary address for the 24 HD Surveillance LLC form is the same as his GemCoins operation.

But like I said, John Wou's claims of only being a most casual acquaintance of Steve Chen, and that he was only supporting a new business in town by attending a kick off event or two, are now out the window. And until today that has been the only defense John Wou has offered.

So what's Wou's next strategy?