Could Medical Marijuana Cultivation Save The Sierra Madre Police Department?

It has become the opinion of many that the Los Angeles Sheriff's Department will be setting up shop in Sierra Madre in the not too distant future. It is nothing personal against the boys in blue in the SMPD. Quite the contrary, they do continue to have strong support in this community. It is just that the PD has become far too expensive for a community of 11,000 or so people to financially maintain in the style to which it has long grown accustomed.

So here's the deal. Rather than jettisoning everything from Senior Services to the Library just to keep the SMPD gravy train rolling, City Hall has apparently decided that the considerable savings it would realize from bringing in the Sheriff's Department is really the only way for them to go. It is the least onerous option available. All that remains for the city to do is roll out all of the necessary public relations marketing.

A process that, in my opinion, has already begun. Just ask yourself this question. What would you want to keep? That is the what City Hall will be asking the residents over the next few months. Do you want the SMPD, or the Library?

However, there is now an opportunity to avoid having to make such controversial choices, and it is being placed before the Planning Commission (of all places) next week. Here is how this one rolls out (link). 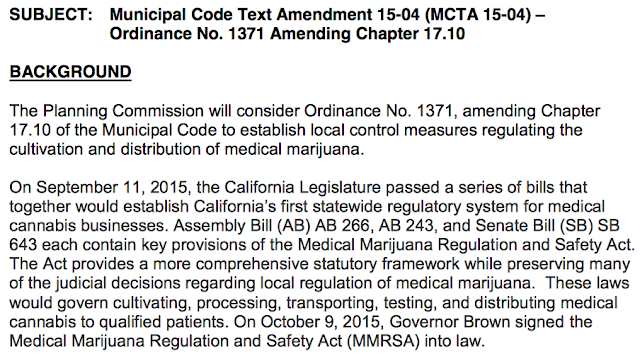 We live in interesting times. Not that long ago the Sacramento Bee ran the following article about the city sales tax and other revenue enhancing possibilities of marijuana production in California (link).

California Measures Taxing Medical Marijuana Win Big At Ballot Box – Californians are eager to tax medical marijuana, but they want limits on who can grow it and sell it. That was the message from Tuesday’s voting, as backers of nearly two dozen local medical marijuana-related ballot questions tallied the votes.

At the same time, however, voters overwhelmingly approved local measures to tax the drug.

The results painted the picture of a state that is still evolving in how it thinks about marijuana even as supporters – emboldened by successes Tuesday in Oregon, Alaska and Washington, D.C. – prepared to place a measure to legalize recreational marijuana on California’s 2016 ballot.

An exit poll for The Associated Press and television networks showed 54 percent of California voters in Tuesday’s election think marijuana use should be legal.

As anyone familiar with Sierra Madre's colorful counterculture past will tell you, this is a community that has long tolerated the use of marijuana within its borders. The question now being will the city monetize this longstanding tradition and in the process finance the preservation of its current status as a full service city. While at the same time maintaining the UUT at that 6% level the residents voted for in both 2012 and 2014.

I figure Sierra Madre can reduce its UUT by one full percentage point for every 1,000 hard core potheads from the San Gabriel Valley purchasing their 420 in town. Not to mention the already robust native demand from domestic markets like The Canyon.

This is something that would not only keep the city's local money in town, but could also help solve the store vacancy problem downtown. Sierra Madre would finally have a business model that will give shoppers a reason to come here and spend.

That plus also enhance the prospects of certain already existing businesses. Eateries would boom. Happy's would now become Happier, and The Bottle Shop could open up a whole new kind of tasting facility. Call it Billy's Bud Room. And after all, both already stock rolling papers.

Of course, what the State of California is mostly concerned about is medical marijuana. Which would also work for Sierra Madre. This is a town that has long enjoyed a reputation as a place where the sick and infirm could go to revitalize their sagging metabolisms and triumphantly return to the paths of health. Sierra Madre could corner the San Gabriel Valley weed market for the "I need my medicine!" crowd, and in the process collect a bumper crop of sales taxes.

One local medical emporium in town already has a suggestive green cross perched atop its tower of health and hope. Can this be just a coincidence? 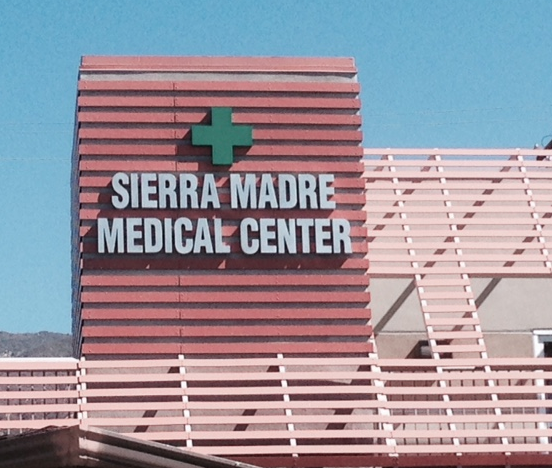 As of this typing City Staff is recommending that the Planning Commission nix Sacramento's ganja dreams. Local governments such as ours have the right to do so under this law, and staff is urging the PC to do just that. All of which is clearly pointed out in the Staff Report we linked you to above.

However, there is no discussion in that report about any of the financial advantages I have pointed out here. Which is puzzling. Since when has City Hall ever passed up on an opportunity to get its hands on more tax revenue? Especially at a time when department outsourcing and potential wholesale staff layoffs have become such hot topics in town?

The Planning Commission meets on December 3rd at 7 PM.

Have a Happy Thanksgiving!


sierramadretattler.blogspot.com
Posted by The Moderator at 4:00 AM