A little cameo appearance for The Tattler recently in a Pasadena Star News editorial on water use reductions, but also a confirmation of something we have been saying all along. Sierra Madre's inability to hit its state mandated water use reduction goals is due at least in part to its leaking water infrastructure. The editorial is titled "Arcadia, Sierra Madre cut to chase on water-wasters." This opinion piece can be linked to in its entirety here.

Here is the part that I am talking about today.

Neighboring Sierra Madre is taking the unusual step of calling its 30 biggest users onto the City Hall carpet — “rounding up the usual suspects,” as the local Tattler blog says of the “Dirty 30.” A little frank talk, along with a new tiered rate structure charging big users more, ought to produce some results.

But Sierra Madre also needs to come to terms with the fact that its aging water infrastructure is not only sending discolored water to its citizens’ taps — significant leakage from water mains is also keeping it from meeting state conservation targets. So it’s by no means just citizens who need to change their ways. Though it’s citizens who will pay the price.

Decades of neglect are not treating this town well. It is also no longer a secret.

The effects of all of those leaking pipes could have played a role in this Los Angeles Times "drought report card" article. Here are the numbers. You can link to the entire article here. 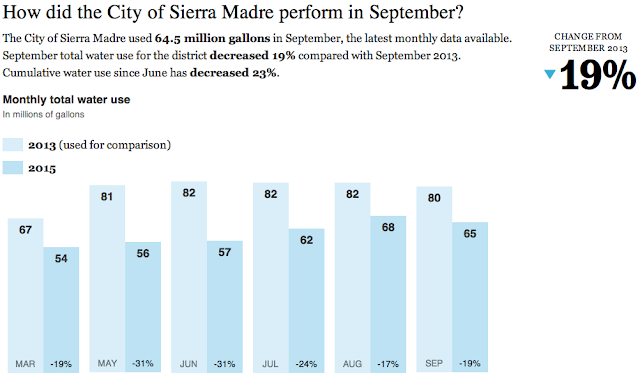 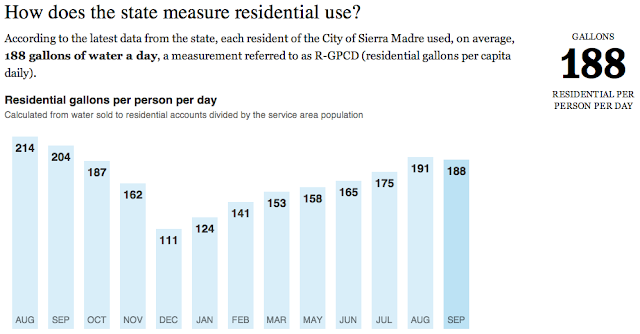 Of course, nobody at City Hall has been able (or perhaps we should say willing) to determine exactly how much of Sierra Madre's water overuse is due to leaking water mains. But that nearly double the California state average usage figure the LA Times cites here should give people a little something to think about.

It is hard to see how this can all be the residents' fault.