Sierra Madre Police Association Is Working To Put Sheriff Question On The Ballot: Could Next April's Election Be One Of The Wildest In Sierra Madre History?

We are clearly talking about the potential for Measure V levels of intensity here. People lining up for blocks to vote, neighbors arguing with neighbors, lawn signs in every yard, folks pounding on your door demanding to know how you are going to vote and, of course, the ever present requests for large cash donations to "Help Save Sierra Madre!" Or whatever small part of it you might actually care about.

But blog-wise? Yes, we do love it so. We're talking about levels of interest, controversy and contention that this little foothill village hasn't seen in a decade. A near perfect storm of political woe and government employee dissension whose elements are only just now beginning to align. It will be strap on your helmet and bar the door time all over again.

If you look at the agenda for this evening's City Council meeting you will be able to note the following (link): 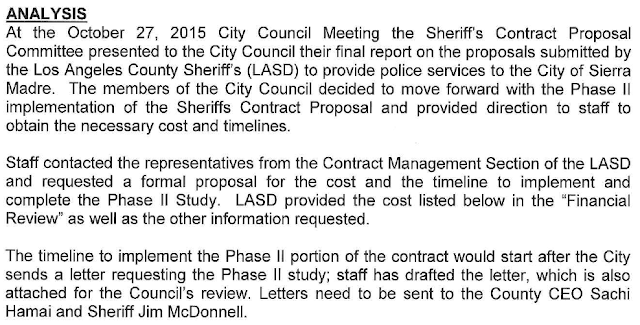 In other words the current City Council, should the latest biennial ballot initiative to raise utility taxes fail (and for the third time in a row no less), wants to keep its options open about hiring the Sheriffs. So they're continuing the process, so to speak, and making sure that everything would still be in place should they be forced to dismiss the Sierra Madre Police Department and hire LA County law enforcement instead.

Which, should the UUT increase fail for a third time, they would absolutely have to do. There is no way this town could afford the extremely expensive SMPD should the UUT sunset to 6%. Some even question whether the city can afford them at 10%. In many ways Sierra Madre's boutique police department has completely priced itself out of its native small town market.

So how does the cop union plan to counter this? How do they keep themselves from being fired should the UUT fail? Here is where things begin to get a little wild.

Verifiable rumors have reached The Tattler that the SMPD's union is now in the process of filing for an April 2016 ballot initiative. One that would put the question of replacing the SMPD with the LASD to a direct vote of the people.

The necessary paperwork has been delivered to the City Clerk, City Attorney and City Manager, and their decision on whether to sanction this move is expected soon. And should City Hall claim there isn't enough time to get this on the ballot for next April's election, the SMPD's union would then have the option of challenging that decision in Superior Court.

In other words, Sierra Madre's cop union is looking to rip the power to decide on the Sheriff's Department question from the hands of the City Council and put it to a direct vote of the residents instead.

Meaning that should the UUT initiative fail as it has two times already, and the Sierra Madre Police Association's "Save the Cops" effort prevail, City Hall would then be legally nailed to having to pay for its very expensive boutique police department out of the remaining 6% in utility taxes.

And how would City Hall accomplish that near mathematical impossibility? Obviously they would have to do some very draconian things. Like close the library, fire most city staff and sell the Water Company. Just for starters. Putting city buildings like the Hart Park House and City Hall on the real estate market would also need to be considered, along with contracting out for Paramedic and Fire Department services.

Practically the only thing left intact under this scenario would be the Sierra Madre Police Department. But since they are only concerned about themselves, how could they even care?

One more question. Any chance that Harabedian, Goss and Sheriff's Contract Proposal Review Committee Chair Lambdin might have been in on this? I'd say there's a good possibility they were.

What if the SMPD "Save the Cops" ballot initiative prevails, but there is no UUT money whatsoever? Like 0% instead of 6%? This following advertisement ran in last weekend's edition of the Mountain Views News: 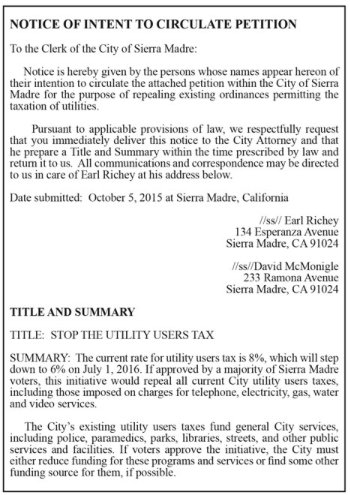 So if this initiative to get rid of Sierra Madre's utility tax altogether wins, while at the same time the one that forces City Hall to retain its very expensive police department also passes, what happens then?

Like I said, this could be one of the wildest elections in Sierra Madre history.