A Correction On The Behalf Of The Mountain Views News 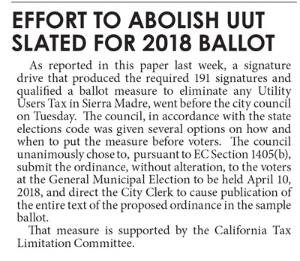 The Mountain Views News, which remains Sierra Madre's legally adjudicated newspaper even though its publisher (who may not be the legal owner) no longer lives in town, nor apparently even has an actual office here any longer, reported the above in its weekend edition. It is remarkably wrong and definitely requires a correction.

The City Council did not "chose," unanimously or otherwise, to put a resident initiated measure eliminating its utility users tax on the April 2018 ballot. What did happen is the City Council, because of the lateness of Los Angeles County's vetting of the petition to put such a question on the ballot, decided that logistically it could not make it onto the April 2016 ballot. Which is where many people thought it should be.

The reason for this being the sample ballot arguments, those pro and con statements appearing in that election preview booklet you receive in the mail from the County of Los Angeles prior to an election, could not be written and published in time for this April's election. Per the City Clerk that deadline had pretty much passed, and therefore no proclamations on this matter could be included in the mailing for the April 12, 2016 contest.

By all accounts the measure designed to vote Sierra Madre's utility taxes out of existence will now be on the June 7, 2016 ballot. Or at least that is the City Council's goal, and one that apparently can be met without too much difficulty. California holds its state primary on that date, and the costs associated with including this measure on the fate of Sierra Madre's utility taxes would be minimal.

A special election, which was not called for by the folks who want to get rid of the UUT, would have set the city back $50,000. Or the cost of one consultant.

To be clear, there was no official City Council vote on this matter. They did not vote on it at all. Nor was there any "unanimous" decision to place this measure on the ballot more than two years from now. Why the Mountain Views News would claim there was remains something of a mystery.

However, rather than any deliberate attempt to sow confusion, perhaps the paper's one person management just didn't understand what actually happened.