"That is a very good question. Once we contract out 100% to LA Sheriff Dept., any and all suits about police would be handled by the LASD Attorneys. Less billable hours for City Attorney Highsmith and her crew." - Reader comment

The City of Sierra Madre, like most cities from anywhere in this great land, cannot spend taxpayer dollars advocating for or against candidates, issues, or especially ballot measures asking the voters to give them more of their money. It just is not done. However City Hall, which is staffed by persons whose continued employment may very well depend upon Measure UUT passing, will be preparing supposedly nonpartisan information that will be sent out to you the public. Information that, and without showing any preferences whatsoever (or so it is claimed), will inform the voters about this ballot initiative. Here is how this is explained in the appropriate staff report (link), prepared for tonight's City Council meeting. 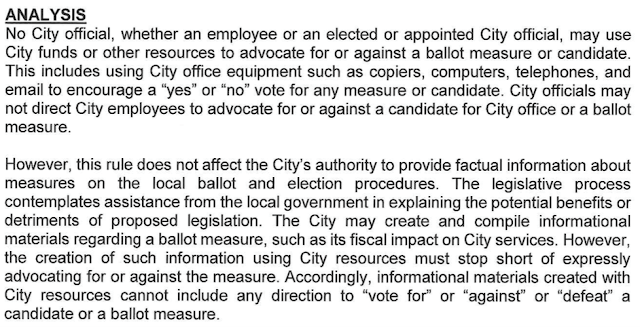 Seems rather dicey, right? I mean, how can it be claimed that the very persons who would financially benefit from Measure UUT being approved by the voters will be able to send out information about a tax increase without showing at least a little bit of institutional bias? And wouldn't the mere act of sending out that material itself contain at least something of a pro-tax message? After all, it does come from a government agency. In this case the very one that pushed for this utility tax increase in the first place.

Trust me, Measure UUT was not an idea that the residents came up with. They had already expressed their opinions by voting down two similar utility tax increase measures in 2012 and 2014.

But those crafty City Hall types believe they found a way around this. They used the not ordinarily all that exalted UUT Oversight Committee as its nonpartisan judge and jury. Here is how that one was baked.

However, since the UUT Oversight Committee voted unanimously for utility taxes to go up, and I believe at one point actually claimed that a state leading 12% rate would be the most appropriate one (no city in all of California has so high a rate, just so you know), their nonpartisanship might also be called into question as well. At least by this blog.

But you know, and I know, how this really goes. It is a kabuki dance permitting the employees at City Hall to campaign for the utility tax increase they feel that they deserve, and do so on the public's dime. A legal gray area that they believe nobody will ever challenge, in a court or anywhere else.

Here is how much City Hall is spending for their "Schedule of Information Dissemination," designed to convince you to vote for Measure UUT.

$10,000 to hold a tax party at the Fire Station, plus send out postcards, mailers, social media campaigns and flyers. About as nonpartisan as a high school cheerleader, right? But the UUT Oversight Committee said it was OK, so there you go. How could anyone ever challenge that?

Tonight's City Council meeting starts at 6:30 PM. The "cops beating feet" agenda item alone should be more than enough to keep you amused and happy for hours.