Do The Passionists Know Something That We Don't?

The Passionist Fathers have a "Frequently Asked Questions" website up and running answering a lot of concerns that nobody has actually asked about lately. The assumption most in Sierra Madre are making right now is that this unfortunate 41 unit strong McMiniMansion developmental denouement is face down and floating dead in the water, and no amount of miracles from either above or below is going to make the mess swim again. Even if the area does seem strangely pool free.

I mean, nobody is really asking them any of these questions anymore. Not once, twice or, as they are claiming here, frequently. But they now have some answers prepared for us anyway. So why is that? Are they anticipating a coming political change of some sort? Something that will make their project actually seem feasible? Despite all that you might have been hearing about the sorry fate of any development at Mater Dolorosa?

Now you do know that I love a good conspiracy theory. What blog doesn't? They are occasionally interesting in my opinion, and in this town more often than not they turn out to be true. Look at John Capoccia's flip on utility taxes. In 2012 the big issue was a 12% utility tax. In 2016 it is preservation. Flips happen.

I have to tell you, I'm starting to wonder if things are not quite what they appear to be with the proposed development at Mater Dolorosa. The Passionists seem to believe that this is not quite the dead issue many think it is, but rather political conditions could somehow improve for them, and in the not too distant future. And with this FAQ website of theirs they seem to be getting ready for the special day.

This is how one commenter put this yesterday:

I think what the Passionists are hoping for is once the April election is over the city's need for revenue will outweigh any campaign promises made by the two Johns about preservation. Denise and Rachelle will fight it, but I can see the three dudes giving in and taking the development impact money, which will be considerable.

The point is a pretty good one. It very well might be that the Passionists believe the city's current stance on development at Mater Dolorosa is actually pre-election posturing, something designed to get John Harabedian and John Capoccia elected to second terms. And once they are safely beyond the reach of the voters, then the business of developing monastery lands will get done.

It all comes down to the money. It always does. The Passionists lay it out this way. 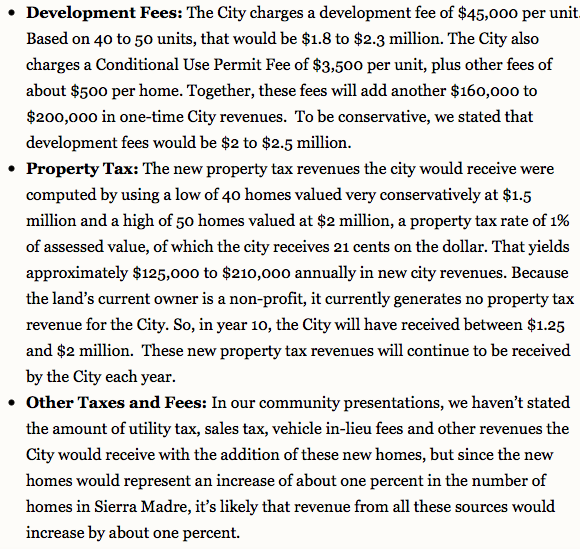 In California, which has the highest development impact fees anywhere in the country by a factor of about 10, these fees serve as a way for developers to pay off local city governments (link). You can see how it could work here. That really is a lot of cash.

Look at the situation this way. It is estimated that the City of Sierra Madre's CalPERS exposure is somewhere in the $9 million dollar range. This out of an available $11 million. Near insolvency, my friends. Even if the city's 66% utility tax increase is approved at the polls, it is doubtful the additional revenue will be enough to cover even this one demand. Much less all of the many other things they are claiming it will fund.

Once re-elected, the Two Johns will be termed out and incapable of running again. Outside of a recall, they'll have become untouchable. Having gotten all the political milage they needed out of preservation (an issue they own to the point where nobody even dares to run against them), do you really think they are beyond flipping on this issue? Given their priorities and past?

In 2012 the residents voted down a UUT increase measure, and elected John Capoccia to help guarantee that such a thing would never happen again. We have since seen two additional attempts by the city to pass big utility tax increases.

Do you really believe the same thing can't happen with community preservation as well? How much are you willing to wager on that never happening?

I think the Passionists are clearly convinced it can, and they now have all of their arguments ready. Especially the money one.

You can link to all of that here.