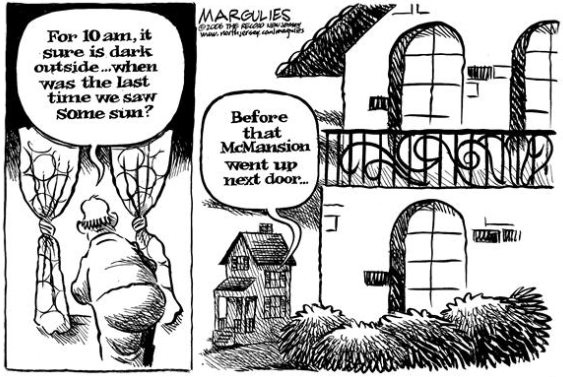 Mod: Today we have a little bit of point/counterpoint on McMansion development in Arcadia that I think you will find interesting. The first is an opinion piece written by former Arcadia Mayor Jim Helms that appeared in the Arcadia Weekly a while back. It advocates for what is tantamount to a complete surrender to the developers and big money interests working behind the Peacock Veil. The second column, which later appeared in the same paper, is a reply written by James Whitehall that basically gives Mr. Helms his long deserved comeuppance. Link to the Arcadia Weekly here.

Jim Helms: Arcadia yesteryear and today
When I arrived in Arcadia more than 60 years ago we called our town a Community of Homes. We lived and raised our families in single story homes which we quaintly called Ranch Style.

We had beautiful and well-manicured front lawns (many in Dichondra plants) and the door was always open to neighbors and friends, Our children played together; on our cul-de-sac they played ball in the street. We had block parties. We decorated our houses for the holidays, and on our street we had Christmas candles on every lawn. As a town we were well organized – there was a group to fit any interest. We were a cohesive community. We donated our money to many charitable and civic causes. We especially favored our schools. We invested a great deal of money both in our schools, and in the infrastructure of our city resources.

Alas, the world is constantly in change. Sometimes we can see change only by looking backward, but in Arcadia we can see change on a daily basis on every street. So many of our friends and neighbors have moved away. The New Arcadians have different lifestyles. They prefer larger homes and they especially like their privacy. They plant tall hedge rows in front of their homes to insure their privacy. We seldom see their children at play. Of course I am writing with a “broad brush.”

We Old Arcadians are so fortunate that these newcomers chose to invest in Arcadia. Our friends who have sold their homes got astonishingly high prices for them. The New Arcadians keep their homes looking immaculate. Many of them are involved with the Arcadia Chinese Association which is an outstanding and civic-minded group. The ACA is a real blessing for our city. Their leaders are highly respected and highly-regarded people. We have seen the New Arcadians taking leadership roles with the Methodist Hospital Foundation and other civic groups as well as the City Council. This is as it should be.

To paraphrase the Bard Shakespeare, Our time on the stage of life is brief. The time of the Old Arcadia is passing quickly. In a very few years the people who want Arcadia to remain as it was years ago, they themselves will become history.

James Whitehall: Former Mayor Helms Is Simply Wrong
The problem with Arcadia, which Mr. Helms contributed to, is its antiquated residential zoning code. In contrast to most cities in the San Gabriel Valley, Arcadia’s code does not include a FAR or floor-area-ratio for determining limits on home sizes.

For decades Arcadia’s antiquated code was not a major liability. Most homeowners added onto their existing homes and new homes were built with respect for the existing neighborhoods. New homes increased in size to reflect modern desires, but did so at 30%, 50% or sometimes 100% increase in square footage.

What has changed is the speculator-driven practice of building new homes that are 200%, 300% or even larger than the existing homes in a neighborhood. This is all about profit and greed amongst the development and real estate professionals and the investors who fund them. It has little to do with neighborhoods, residents or community.

Speculator-driven building practices have seized upon “loopholes” in Arcadia’s residential zoning code, where there is no FAR, basements are not counted, garages are not counted, etc. The new practice is to build to the absolute limits the code allows and then seek variances whenever possible to build even bigger. In many cases the new homes exceed 65% on a FAR basis. Neighboring cities have FARs limited to 35% to 40%.

Because speculators have caused building practices to change, especially in the past five to 10 years, Arcadia’s residential zoning code needs to change. This has already occurred in nearly every other city in the area.

Why not Arcadia? One reason, but surely not the only reason, is that several of Arcadia’s former mayors like Mr. Helms, Mr. Harbicht, Mr. Wuo and Mr. Chandler seem to care much more about the desires of speculators, investors, developers and realtors, than they do about residents. The inaction by many of Arcadia’s former mayors and two current councilmen to address this issue head on, shows where their allegiance lies. They are motivated by personal profit and avarice, and the campaign contributions from the speculators that keep them in office.

This is not about the Arcadia of yesteryear or dreams of an “Old Arcadia”. This is greed and politics. Where a proud community of homes once stood, a new “community of investment properties” has arisen. And it has permanently altered Arcadia.