There is a Facebook page in town that goes by the name of "Sierra Madre." It is a place where you can often find some of this city's more innocent folks posting their opinions. A few of them appear to be from the old Civility Party crowd, and likely are still mourning events such as the departure of Nancy Walsh from the City Council. Apparently for them things have gone downhill in Sierra Madre since the Queen of Cray hung up her tinfoil crown and stopped treating us to her oftentimes edgy opinions.

If it is any consolation whatsoever to them, I too miss Nancy Walsh. But probably for very different reasons. She used to bless us with great video content. Here is one where the former Mayor compared a report about reducing City Hall hours to the repellent practices of child predators (link).

A word of warning though, some of the language contained in that linked video clip gets a bit blue. Do not share it with your younger kids.

However, I also miss the Sierra Madre Facebook page. I used to post links there to articles posted on this site. Sadly, after I left one about an article that included a leaked internal report detailing a culture of employee institutional violence at Southern California Edison, I suddenly found myself blocked from the Sierra Madre site. I can't even view it any longer. Truly a sad commentary on the inability of certain elements in this town to deal with opinions they might not share.

Here is a snippet from The Tattler post that got me booted from the site (link). 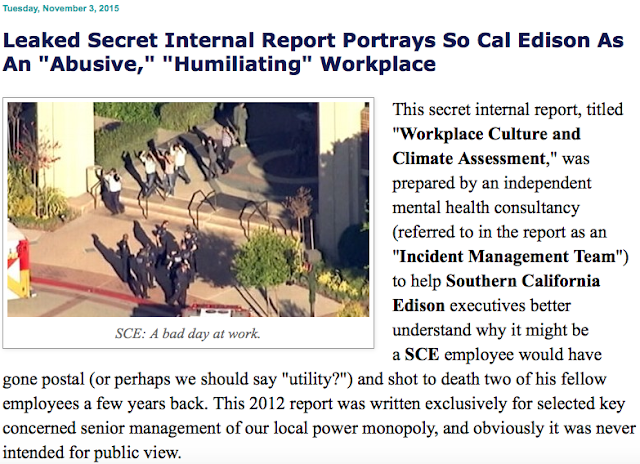 But I digress. Bill "Rooster" Coburn, who runs an antediluvian on-line news site called SierraMadreNews.net, apparently is not a person who cottons to the challenges of independent thought. He rarely publishes anything more than City Hall press releases there, and never dares to add any commentary of his own. Apparently Bill regards the stuff he is sent from downtown as wisdom received from on high, and it is not his place to second guess such things.

Unfortunately, Bill also has some problems with basic math. Particularly when it comes to Measure UUT, the City Hall proposed April ballot initiative that will raise your utility taxes to some of the highest levels found in the State of California. Here is what he posted on the Sierra Madre Facebook page. 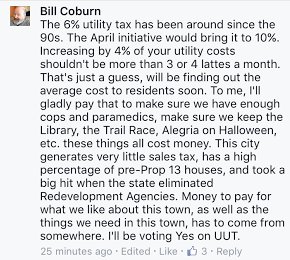 I wasn't aware that the "Algeria on Halloween" event was funded by city money. Probably because it is not. The residents living there foot most of the bills all by themselves. And it would be equally sad to think that the Mount Wilson Trail Race would have to be discontinued without the participation of City Hall. Especially when you consider that nobody employed there ever actually runs in that race.

Also, while the 6% UUT might have had its origins in the distant past, there was quite a long stretch there when it was at 10%. I believe right up until July of 2015. Not certain how Bill could have forgotten that.

However, the worst part of Bill's Facebook post is that it is mathematically illiterate. It took former Sierra Madre City Councilman Chris Koerber to explain why.

This does explains some of Bill Coburn's work on the Public Safety Committee. I'm also not sure what sort of latte' he is talking about.

I hope it isn't the kind you can now legally buy in Colorado. I hear they're highly expensive.