The Eagle Has Flown

There will be no third option on the ballot for the Sierra Madre City Council elections this coming April 12. Per an email sent out to the local news media yesterday by City Clerk Nancy Shollenberger, Bill Tice has not filed the necessary signatures or paperwork and will not be running.

Outside of a write-in candidacy, this means Sierra Madre voters are now faced with the rather undemocratic prospect of either having to vote for the two incumbents in the race, current Mayor John Capoccia and Councilman John Harabedian, or not at all. As there are two seats up for grabs this time around, this City Council election is pretty much a done deal. And without the opportunity to cast a protest vote that perennial candidate Bill Tice would have offered, you can either like it or lump it.

However, all is not lost. There finally appears to be candidates for both the Treasurer and City Clerk positions.

Papers have been drawn and signatures acquired by Michael Amerio for the position of City Treasurer. As you might be aware, Michael helped write the sample ballot argument against voting for Measure UUT this April. He also helped write the rebuttal to the pro-Measure UUT argument as well.

Here is how that reads: 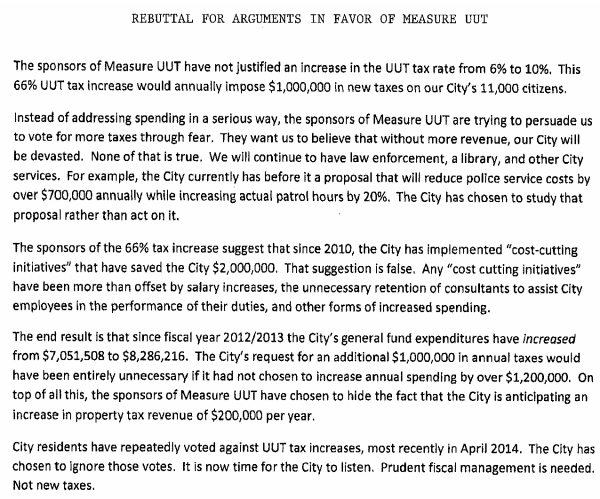 I'm not sure how Gene Goss is going to feel about that.

In recent years the position of Sierra Madre City Treasurer has largely been a ceremonial one, and outside of signing checks and filling empty chairs at certain only marginally important committee meetings, there has not been much to that job.

But what if someone were elected to the City Treasurer gig with more proactive goals in mind? This is an elective position after all, which does mean City Staff would not be in the position to say no to any of the requests a more energetic Treasurer might make. Certainly the potential to do good things is there.

Michael Amerio is a CPA and Managing Partner at the financial management firm Lucas Horsfall Murphy Pindroh (link) out of Pasadena.

Melinda Carrillo will apparently be the one candidate for City Clerk. Good news for anyone who was concerned that nobody was going to run for this job and the responsibilities of that position would be then be assumed by the City Manager's office. Not the happiest of prospects.

According to what I have been able to surmise from poking around the Internet (and yes, I am going out on a limb here), Melinda Carrillo is a successful downtown Sierra Madre business owner who also holds an advanced degree in Clinical Psychology from the University of Manchester. Something that might hold her in good stead when performing the duties of City Clerk at Sierra Madre City Council meetings.

Obviously on site interventions are needed there sometimes.