As predicted a couple of times here on The Tattler, the City of Arcadia has no extra police to spare for patrolling the now defenseless late night streets of Sierra Madre. And because of that last night the Arcadia City Council unanimously voted down City Hall's  request for help with its policing problem.

Of course, if you are a reader of this blog you knew this result was a clear possibility. Here is how we shared our special insight with you yesterday. 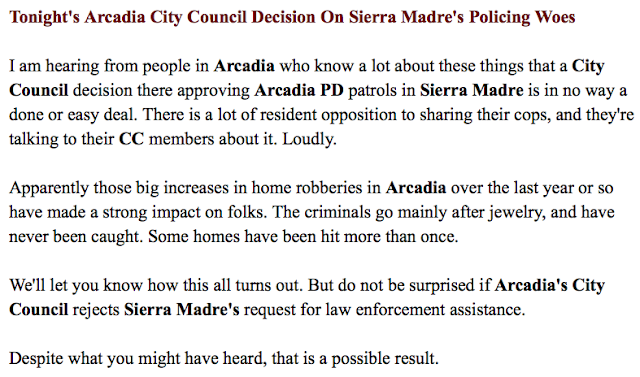 Far be it from us to say we told you so, but we did. If City Hall would just listen once in a while to what we lay down here, and as a free service no less, they could have spared themselves a lot of embarrassment last night.

While City Manager Elaine Aguilar and Chief Larry Giannone were in the house with him, Mayor John Capoccia did all of the talking. Predictably he blamed the sunsetting of the UUT (which at one time he advocated) and resulting low pay for the loss of half of Sierra Madre's cops. Which, at least to me, makes no sense. After all, the pay City Hall offers its police officers now is pretty much the same as it was when the UUT was at 10% and hadn't been voted down yet.

Was there an SMPD pay hike in the works if Measure UUT had passed in 2014?

Ordinarily I am not a big advocate for Councilmember Roger Chandler due to his inability to understand the destruction mansionization has brought to much of Arcadia, but he did bring the elephant out into the open last night with this following question.

"Why," he asked, "are you coming to us with this request? Why haven't you gone to the Sheriffs? They're right down the hill."

Under additional questioning about Sierra Madre's puzzling refusal to work with the Sheriffs from other equally incredulous Arcadia Councilmembers, Mayor Capoccia tried to explain that somehow the political situation in Sierra Madre makes that impossible. Capoccia even cited the opinions of that bonkers public safety committee Glenn Lambdin heads up as proof of how difficult hiring the LASD would be for him.

All of which Roger Chandler then pronounced to be completely irrelevant. He then actually offered Capoccia the phone number of the Sheriff's Department. Right there on live TV. Just in case he didn't have it.

Unless Capoccia is looking forward to experiencing equally uncomfortable and futile evenings begging for policing help from Pasadena and Monrovia, he probably should have accepted Chandler's offer.

Now that Arcadia has shot him down, John Capoccia no longer has any other real options left. It's the Sheriffs or nothing. No matter how concerned he is about the dotty old dears that send him e-mails proclaiming their love for the Sierra Madre Police Department.

You know, the Police Department that has now deserted them?

And yes, this was an embarrassing night for Sierra Madre. Our city officials should have known better.