City Hall Blinks? The Los Angeles County Sheriff's Department Could Be On The Way

You know, it would have made it easier for everyone concerned if City Hall had just done the most logical and sensible thing right out of the box. But what fun would that have been? Watching the folks downtown do wild and wacky things in the past is what has kept this blog going strong for years. We'd hardly expect things to change just because a lot of people in town pointed so popular a reality out to them.

In case you are wondering where I get this kind of information, there is nothing at all that arcane or mysterious this time. It is right out of the relevant Staff Report for Tuesday evening's City Council meeting (link). And judging by what I'm reading here, it appears that the long struggle is over and, despite the fact that it might hurt the feelings of whomever remains on the Sierra Madre Police Department, the City Council appears to be well on the way to at least temporarily hiring the Los Angeles County Sheriff's Department. This to fill the staffing gaps left by the exodus of so many unhappy and fearful SMPD officers.

Who'd a thunk it? However, the City Staff didn't make this move without first asking everybody else on the planet. That is made abundantly clear in this passage.

I'm not sure anyone who has followed the more shameful and controversial aspects of the Kendrick McDade murder and cover-up (link) is going to get too excited about bringing the trigger happy Pasadena Police Department to these peaceable streets. But as of this typing that does not appear to be too big of a possibility. At least for now. But yes, we'll keep our eye on on it.

Then, of course, there is some of the usual blame assigning. City Staff, as we are all very aware, is never wrong about anything.

However, the rest of the news is not all that bad. Check it all out. 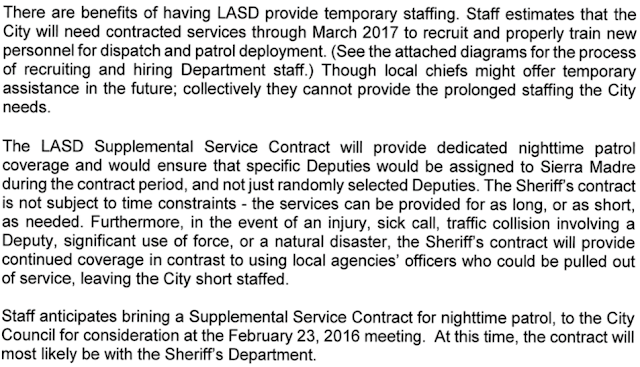 On February 3rd the Pasadena Star News published an article called "Arcadia to Sierra Madre: Sorry, we can’t help fill police department void" (click). In that article the mere possibility of hiring the Los Angeles County Sheriff's Department is credited, at least in part, for the departure of half of the Sierra Madre Police Department. Here Mayor John Capoccia is quoted as believing that an actual LASD hiring, perhaps even on a temporary or part time basis, could result in the rest of the SMPD beating feet as well.

“If there is a need, the sheriff’s will come,” (Capoccia) continued. “It’s a very sensitive issue (to contract with the sheriff’s). It could lead to perceptions that are not representative of our intent to the police officers, and with the public as well.”

Capoccia is referring to the city studying completely outsourcing police services to the Sheriff’s Department in hopes of saving the city money and addressing a reduction in revenue due to a sunsetting of a higher utility-users’ tax rate in July, when it is expected to drop from 8 percent to 6 percent. Fears about contracting with the Sheriff’s Department have been attributed to part of the reason for the exodus of some of Sierra Madre’s officers.

While I am not sure what the downside might be here, I guess we're going to get and see if maybe he isn't actually right this time.