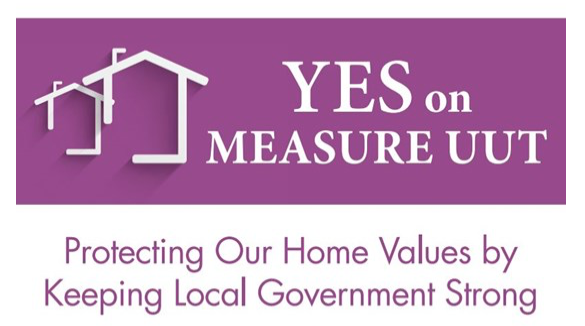 It is an interesting if not exactly honest strategy. Support Measure UUT in order to help City Hall protect Sierra Madre. Never mind that the efforts to actually get that done in Sierra Madre, from the Canyon Zoning Committee to updating the General Plan to the organization Preserve Sierra Madre, were led by residents and not an at times actively hostile City Hall.

Apparently we are now expected to believe that folks like City Manager Aguilar and Director Inman are the key players in protecting this town from such unhappy things as mansionization and a resulting property value decline. Not the likes of you.

So who exactly was it that delayed the completion of the new General Plan for almost 5 years? Or helped enable the environmental catastrophe at One Carter? Apparently today loving Sierra Madre requires that you have an extremely feeble memory.

Did I also use the phrase "not exactly honest?" The word cynical would probably apply here as well.

They have a website, of course. They always do. You can access it by clicking here. There isn't a whole lot to be found, however. How could there be? And most of the documents they do have are recycled materials first prepared months ago by City Hall. It is pretty much the same redacted nonsense found on the city's website.

But there is this moment of Orwellian excess:

Yes, the problems have both already started and gotten worse. They were also well under way when the UUT was at 10%, and have been for years. And when the UUT was at 10% nothing was done to stop things such as the severe degradation of Sierra Madre's water infrastructure. Even though they had nearly a decade of double digit utility taxes and repeated water rate increases to do so.

So how is restoring Sierra Madre's utility taxes to 10% going to solve problems that were not addressed when the UUT was at 10%, as it was for all those years? The answer is this twice voter rejected tax hike would have precious little to do with any of that. Measure UUT is a 66% tax increase designed to help deal with employee compensation issues such as this city's many millions of dollars in CalPERS debt exposure. Not fix the pipes.

In other words, it is an effort to financially reward the very city employees that helped lead us to these unfortunate impasses in the first place. The same apparatus that worked to delay the completion of the General Plan for years, and enabled One Carter and the Downtown Specific Plan, is now apparently supposed to be considered essential to preserving this town.

I was going to ask why Measure UUT proponents can't bring themselves to tell the truth. But then again, how can they? It is far too unpleasant, and nobody would ever vote for it.