An important obligation of community leadership, particularly elected leadership, is to explain to the people the meaning of things. Yet last night two rather momentous and controversial events happened, and nobody at the dais had much to say.

Actually the City Council basically said nothing. Each just sat there and blinked their eyes. They did compliment whomever it was that delivered the information to them however, and then moved on like absolutely nothing had happened. This despite the historic magnitude of what was going down. Here are those two rather momentous events, psychological disconnect and all.

1) It was revealed in an actual city report that Sierra Madre's total CalPERS debt exposure is $9 million dollars. This in a city of 11,000 people. According to last year's UUT skeptic version of Martin Truitt, that comes out to $814 of city employee pension liability per living Sierra Madre resident. Small children and babies included. The City Council offered no enlightening commentary on the significance of this huge amount of previously unrevealed debt. Nor did they intimate how much of the utility tax hikes being asked for would be spent to meet so onerous a debt load. They did compliment the person who delivered the report, however. They thought it was nice.

2) Sierra Madre has just hired a second police force. The city now has a daytime police force and a nighttime police force. The SMPD and the LASD. And so novel a combination comes with two entirely separate pay obligations. The nighttime police is the Los Angeles Sheriff's Department, and comes at an additional cost of $400,000 for a few months, then the price goes up. How long they need to be here depends on how soon the badly depleted SMPD can hire new people. Chief Giannone is working on it. It could be by the end of June, or it might be much longer, with the eventual total cost going well beyond a million dollars. Approximately 150 individuals straight off the streets are now being interviewed, and once hired will then go to a police academy somewhere on the city's dime. Done because no actual trained professional officers will take a job here. This scheme is also dependent on what remains of the SMPD staying put. No guarantees were offered.

The City Council asked very few questions, and offered no insight on the significance of any of this. Nor did they even take the time to answer questions from the residents who came to speak at the podium. Despite assurances from Mayor Capoccia that they would. Why is this? Did the City Attorney forbid them to speak on these matters? Was it part of the time-honored tradition there to never admit that City Hall just might be at fault for its own failures? Did they believe that if they didn't talk about it, none of this actually exists?

I don't the know answers to any of that. This entire air brushed and largely content-free meeting was swept under the rug and over in less than two hours.

There was some hope for leadership last night, however. And if it wasn't for Mr. Gold we'd have been looking at an entire night where very little was actually said. Here was Barry's take: 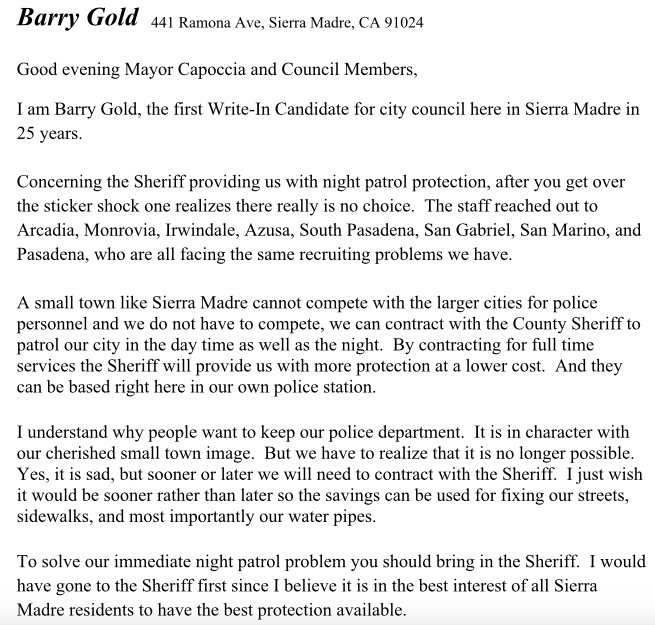 Just in case anyone has forgotten what real leadership looks like.

The following City Hall prepared publicity material is now up on the Pasadena Now website (link). 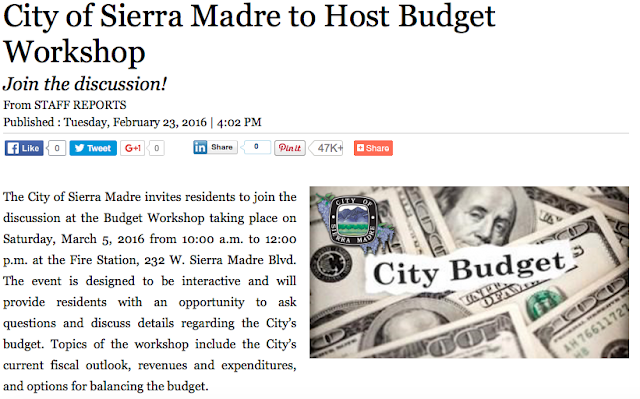 Of course, were you to attend this city sponsored pep rally for increased utility taxes and ask questions like, "What is the significance of Sierra Madre's $9 million dollars in CalPERS pension debt?" you will likely be ignored. It isn't a dumb bunny issue, and therefore not what they want you asking about right now.

Obviously nobody at City Hall wants to tell you anything about this stuff. Neither last night or at the upcoming affair being described above. They prefer instead to rely on staged and carefully controlled events like what is being cooked up at the Fire Station.

Brown vs. CalPERS: The ugly status quo wins - The California Public Employees’ Retirement System, the nation’s largest public pension agency, is desperately in need of a shake-up. That’s not just because of revelations about kickback schemes and other scandals. In a word, CalPERS is obstinate.

One historic example: In 1999, the agency persuaded the Legislature to approve a retroactive 50 percent pension boost for state workers with the argument that it would have little or no long-term cost to taxpayers because the stock market boom of the late 1990s would never end. This led many local governments to adopt similar retroactive pension increases. When this yielded fiscal nightmares, CalPERS launched a public-relations campaign that dramatically downplayed the problem.

More recently, the CalPERS board has blocked modest pension reforms sought by Gov. Jerry Brown. This and other decisions prompted the governor’s two appointees on the 13-member board to press for term limits for leadership positions. But at a meeting last week, board President Rob Feckner broke a 6-6 tie and became the deciding vote against imposing term limits. Feckner is serving his 12th one-year term as president, according to calpensions.com.