Mod: Big editorial today in the Pasadena Star News advising the City of Sierra Madre to take a long hard look at bringing in the Sheriffs. Link here to the PSN site. 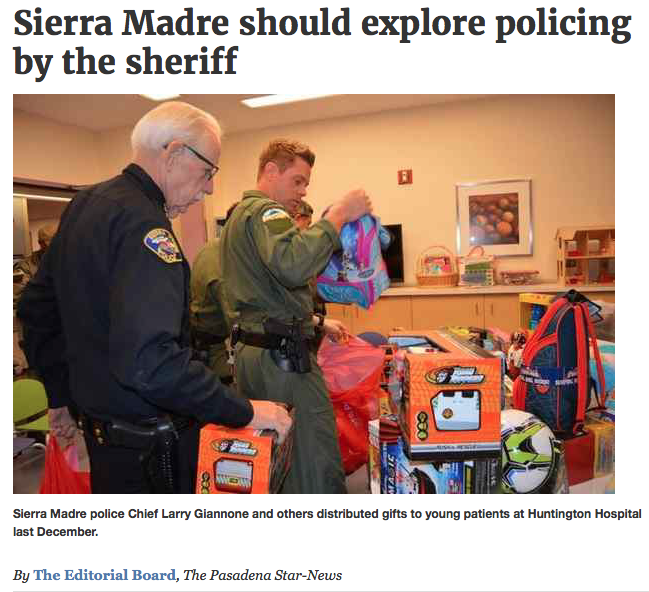 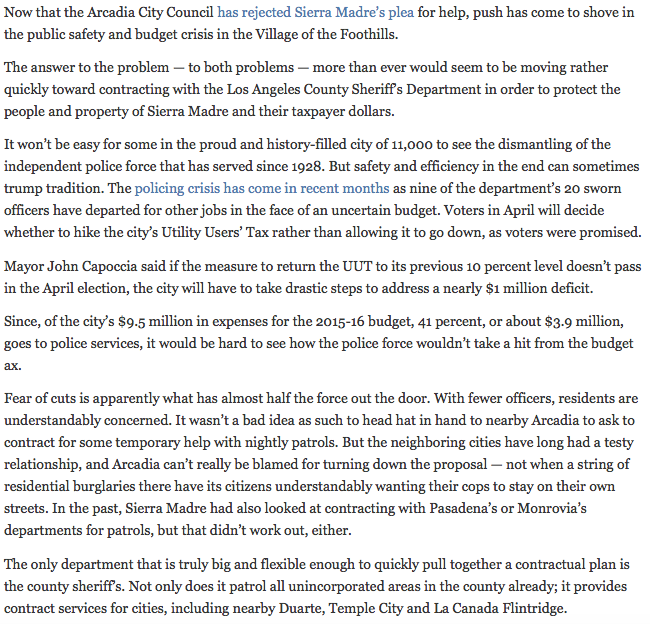 Mod: The big question: When will Mayor Capoccia call an emergency City Council meeting to discuss the police crisis and bringing in the LASD? Will somebody have to get hurt first?

Mod: What follows is a letter Rick sent to Mayor Capoccia in hopes of bringing him to some very reasonable compromises on the question of how law enforcement needs to get done here in lieu of the SMPD's collapse. It seems that everyone is trying to get John Capoccia to do the right thing.

I find it discouraging that our city is divided when we all have the same goal in mind: A better and more vibrant Sierra Madre. As a result, I have decided to write to you with my thoughts on how our city can (i) deal with Arcadia's rejection of its request for supplemental police services, (ii) make needed improvements, and (iii) meet all funding needs. To that end, I encourage you to take the following actions:

1.  Adopt the Sheriff's 20/20 proposal and bank the $700k in annual savings it will yield.  This will for the first time free the city from its 47% police services spend.  It will also enable the city to receive the 24 hour/devoted police service coverage it requires without having to engage in the now necessary protracted and expensive re-build of the police department.

2.  Withdraw the 10% UUT proposal, which is openly being promoted as a way to provide still further funding to the Police Department without addressing our disproportionate police spend.

3.  Propose and place on the ballot an 8% UUT increase of $500k a year which would be applied to civic improvements and infrastructure. During year one I would propose that $250k of this be devoted to improving our Little League facilities, $150k to improving our Library, and $100k for senior services.  It is essential that the council promise that all future proceeds of the increase would be applied to civic improvements and/or investments in parks and infrastructure.

I am confident the entire city would get behind such a proposal, as the cost (loss of a proprietary Police Department) would be more than offset by the benefits (a steady flow of civic improvements).  Moreover, I am confident the City Council would prefer to be involved in building and delivering civic improvements rather than trying to continually deal with the ever increasing funding demands associated with our Police Department.

Once again, I would like to thank you for your service to our City and wish you and the council well in addressing our civic needs.