Every person who desires to be a write-in candidate and have his or her name as written on the ballot of an election counted for a particular office shall file:

A statement of write-in candidacy that contains the following information:

1.  Candidate's name.
2.  Residence address.
3.  A declaration stating that he or she is a write-in candidate.
4.  The title of the office for which he or she is running.
5.  The party nomination which he or she seeks, if running in a partisan primary election.
6.  The date of the election.
7.  A certification of the candidate's complete voter registration and party affiliation/preference history for the preceding 10 years, or for as long as he or she hs been eligible to vote in the state if less than 10 years, if running for a voter-nominated office.
8. For any of the offices described in Section 13.5, a statement that the candidate meets the statutory and constitutional requirements for that office as described in that section.
The requisite number of signatures on the nomination papers, if any, required pursuant to Sections 8062, 10220 and 10510,or in the case of a special district not subject to the Uniform District Election Law (Part 4 (commencing with Section 10500) of Division 10), the number of signatures required by the principal act of the district.
Notwithstanding any other provision or law, a person may not be a write-in candidate at the general election for a voter-nominated office.

Form of Nomination Papers:
The nomination papers for a write-in candidate shall be substantially in the same form as set forth in Section 8041.

Signers of nomination papers for write-in candidates shall be voters in the district or political subdivision in which the candidate is to be voted on.  In addition, if the candidate is seeking a party nomination for an office, the signers shall also be affiliated with the party whose nomination is sought.

No fee or charge shall be required of a write-in candidate except in the case of a candidate for city office, as provided in Section 10228.

No person whose name has been written in upon a ballot for an office at the direct primary may have his or her name placed upon the ballot as a candidate for that office for the ensuing general election unless one of the following is applicable:

a.  At that direct primary he or she received for a partisan office votes equal in number to 1 percent of all votes cast for the office at the last preceding general election at which the office was filled.  In the case of an office that has not appeared on the ballot since its creation, the requisite number of votes shall equal 1 percent of the number of all votes cast for the office that had the least number of votes in the most recent general election in the jurisdiction in which the write-in candidate is seeking office.

b.  He or she is an independent nominee for a partisan office pursuant to Part 2 (commencing  with Section 8300).

Notwithstanding any other provision of law, a person may not be a write-in candidate at the general election for a voter-nominated office.

Mod: Best of luck to you.

Mod: I hear it didn't take too long for them to decide, either (link). 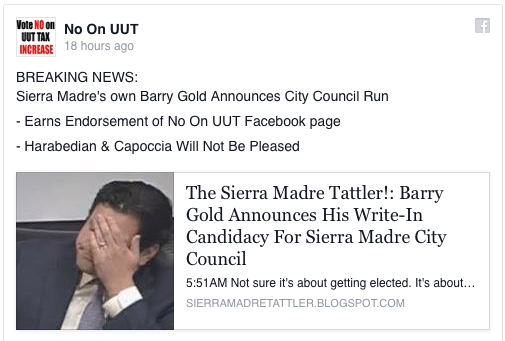