Mod: I received the following from Terry Miller at the Sierra Madre Weekly. While it was too late make this week's edition of the paper version, it is up on their website (link). I am posting it here as well. The upshot is it appears that the Sheriffs will be patrolling the streets of Sierra Madre as early as February 28. Which is a lot sooner than many might have thought. Hopefully some of the more SMPD sensitive individuals in town will be able to hold their water. The message I am taking away here is that if you vote NO on Measure UUT, Sierra Madre gets to have the Sheriffs permanently rather than the quitters. So where is the downside you ask? I am not sure there is one. 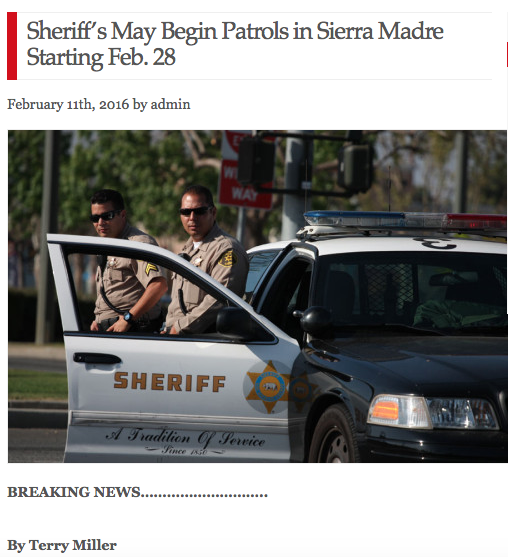 Sierra Madre Weekly has learned that the Los Angeles County Sheriff’s Department will likely be entering into a contract with the City of Sierra Madre for temporary deputy patrol services between February 28 - June 30.

The news came swiftly after Arcadia's City Council last week turned down Sierra Madre’s request for assistance. Deputies will patrol the foothill city streets between 6PM and 6AM.

According to numerous sources, the 12-hour shift contract was approved by the Sheriff’s Department, is under review by Sierra Madre’s city attorney, and will probably be on the next Sierra Madre council meeting agenda on Feb. 23. Just in time for the service to begin that following Sunday, Feb. 28.

The troubles at the SMPD have been long and serious, including multiple lawsuits both externally, towards the department from citizens, and internally, from the department against the former chief of police, Marilyn Diaz. Additionally, the tiny city has little sales tax base, unlike neighboring cities such as Arcadia. It is a tough time indeed for the embattled burgh.

Assistant City Manager Elisa Cox told Sierra Madre Weekly Friday, Jan. 22, that the city is actively seeking new police recruits from the academy but freely admits, “other cities pay considerably more than the SMPD, so this is key in the dilemma the city’s chief executives face.”

Cox also said the election and the Utility User Tax (UUT) will, of course, play a crucial role in deciding the fate of the police.

Elaine Aguilar had this to say in an email comment on this story: “The City of Sierra Madre has not entered into a contract with the Los Angeles County Sheriff’s Department. However, an update regarding Sierra Madre’s police services was provided at the February 9th City Council meeting.

As was indicated in City’s the February 9th staff report, Sierra Madre's police officers are currently patrolling the streets 24/7, but they are working overtime at a pace that cannot be sustained. It is now necessary to secure supplemental, temporary assistance.

The staff report indicated that the Sheriff’s department had been contacted. The report also states that the contract for supplemental services would be on the Council’s February 23rd agenda, and the contract would most likely be with the Sheriff’s Department. Like Sierra Madre, other San Gabriel Valley Police Departments are also not at full staffing levels.

Mayor John Capoccia also commented via email, “At Tuesday’s Council meeting, Public Safety Director Giannone did advise the council that a contract for supplemental services will be presented at our next meeting. I agree with Assistant City Manager Cox. The upcoming measure to set our UUT at 10% will be crucial for Sierra Madreans to keep our own independent Police Department.”

Mod: Hopefully after the residents of this town get a chance to witness the vastly more professional Sheriff's Department in action they will be so happy they'll vote to give themselves a tax break.