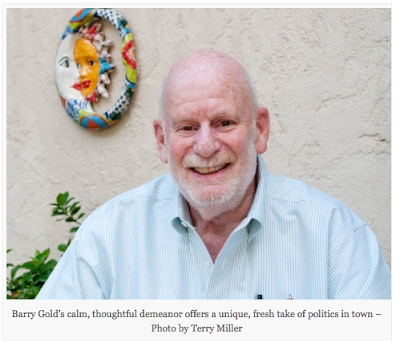 Mod: The Sierra Madre Weekly's very own Terry Miller scoops the world and gets that big interview with Barry Gold, Sierra Madre's first City Council write-in candidate in a quarter of a century. The pulp edition of Terry's paper hits the streets today, but you can see this article in all of its original Internet glory right now by clicking here. You are also invited to meet with Barry, his wonderful family and many of his supporters at the Gold's very cool digs this Sunday the 28th from 12 noon to 5 PM. A good place to discuss some of the big issues facing the city today, and volunteer to help in the cause. The address is 441 Ramona Avenue, between Lima and Park, two blocks north of Orange Grove. You're going to want to be there.

Write-In Candidate Barry Gold Offers Sierra Madre a Fresh Perspective: It looked as though the Sierra Madre Municipal election April 12 would be as dull as dishwater with no one contesting John Harabedian and John Capoccia’s seats.

That is, until Barry Gold became a write-in candidate.

We wanted to know more about the mild-mannered man, and why at 71 years Gold, who is in industrial property management, would want to dive head-first into the rough, somewhat murky waters of Sierra Madre's small-town politics.

Apparently, this is the first time in 25 years that there has been a write-in candidate for a Sierra Madre municipal election.

On Tuesday afternoon we sat down with the candidate to find out what makes him tick and why people should consider going for the Gold, if you’ll pardon the pun.

Gold is an experienced manager of public funds who oversees a $4 million annual assessment as the Chairman of the Downtown Los Angeles Fashion District - so it seems, fiscally, he’s ready.

Firstly we asked the obvious – why a write-in candidate?

Gold said that he had been thinking about the possibility of running for some time, but at recent council meetings he was taken aback by Mayor Capoccia, who publicly chastised those who wanted to eliminate the UUT (Utility User Tax). Paraphrasing, Gold said that Capoccia admonished the likes of Earl Richey who attempted to get the “Abolish UUT” on this year’s ballot, by calling them “foolish … they don’t know what they are doing ….”

Frustrated by this lack of civility on the dais, it was at that very moment Barry Gold claimed, “I decided I HAVE to run; to win!”

After qualifying with 30 signatures (although he only needed 20), Gold became a write-in candidate.

Gold and Judy, his wife of 18 years, moved to Sierra Madre from Arcadia as they were appalled by the seemingly never-ending mansionization in that city. Sierra Madre is small and very much a preservationist town, which is exactly where the Golds’ philosophy takes the next logical step.

Gold got involved with the Preserve Sierra Madre group, which has had a significant impact on the City Council, especially lately.

Gold said he simply couldn’t let Sierra Madre follow the same path Arcadia has taken so he got involved with the group to make the council and planners aware of the dangers of overdevelopment and to help the Sierra Madre down the roads less traveled.

With the General Plan recently approved – after six years – Gold gives immense credit to the current council for implementing the plan and holding onto the belief that size does in fact matter – a lot. New building restrictions are in place but more needs to be done, Gold asserts.

Gold says that the number one issue in Sierra Madre is, of course, finance. Gold is totally in favor of Los Angeles County Sheriff’s deputies patrolling the streets and says outsourcing to LASD will save the city well over $400,000 a year.

Answering critics who say the response times would be long, Gold points out that the Sheriff's Department could use the current Police Department and dispatch area as one of the three options. So it is a moot point. The city can no longer afford its own police force, Gold says. “Sheriffs’ deputies will provide better protection for Sierra Madre’s citizens, due in part to the huge resources available countywide.”

Gold says city planners like John Hutt in Sierra Madre really know how to work with developers and help preserve the small-town charm which has attracted people to move into town, and want dearly to sustain that charm lost in so many California cities due to overdevelopment.

The real issue, though, is always financing. Gold’s take on the city of Sierra Madre’s upper management is quite simple and eloquent. “They’re bureaucrats, much different than in the private sector. In government, local or otherwise, it is an art form to protect your job. Every four years, essentially, you’ll have a new boss.”

Gold said, “We must force ourselves to live within our means.” So he’ll vote no on Measure UUT.

He’s not against a UUT Tax; in fact, as a member of the UUT Revenue Committee, Gold proposed a 9% UUT rate with a six-year sunset back to 6%. The committee recommended 12% and the city council approved 10% with no sunset.

Candidate Gold says he’ll take no campaign contributions. “There will not be lawn signs or mailers. And if elected, I will not owe any favors to anybody except to those who wrote in my name on the ballot. I will repay them by keeping my promise to do everything I can to the hire the Sheriff as soon as possible, make the necessary cuts to balance the rest of the budget, and then concentrate on our grossly neglected infrastructure.”

On March 10, there will be a candidate forum at Sierra Madre Women’s Club in which Gold will participate. The forum starts at 5:30 p.m.

Mod: The article is called "After losing half its police, Sierra Madre to temporarily contract with LA County Sheriff’s Department" and you can link to it here. This is the good part:

Resident Barry Gold, who has recently announced he is running as a write-in candidate for city council, said he is in favor of temporary nighttime patrols, though he believes the city should also consider contracting with the Sheriff’s full time.

“I understand why people want to keep our police department. It is in character with our cherished small town image,” he said. “But we have to realize it is no longer possible. Yes it is sad, but sooner or later we will need to contract with the Sheriff’s, I just wish it would be sooner rather than later so that the savings can start being used to fix our streets, sidewalks and most importantly more of our water pipes.”