The Salisian Affair: Why Building Without Going To The Planning Commission First Can Make You Look Comedic

Mod: We have two videos today that should kick this off nicely. The response from the Planning Commission is the second, and it is one of those golden moments we all treasure from this city's first line of defense against bad development and the cracked actors who attempt it. Then we'll try to suss this all out in the clearest possible English. The matter is up before the City Council Tuesday evening, and should be quite a show.

The applicant, a presumptuous gent named Steve Salisian, bought the property at 156 W. Highland with his brother Robert Salisian. It currently has 3 rental units on it. Steve-o later told the Planning Commission that his brother lives in one of the units with the other two being rented out to tenants.

Mr. Salisian then proceeded to demolish a 200 sq. ft structure and build a 1,322 square foot 2-story affair with a kitchen and two bathrooms that he clearly intended, as least until he got caught, to be an additional rental unit.

However, under R-3 Zoning requirements, he is not allowed to do such a thing because the combined buildings exceed the lot coverage allowance. The property also does not meet parking requirements for a 4 unit structure. And, on top of all that, the new 2-story building encroaches at least 9.8 feet into the allowable side setback. It could encroach even more than that if the applicant turns out to be incorrect when he claimed that he owns a portion of his neighbors property. To our knowledge no survey has been done to confirm that.

A concerned neighbor finally brought this mess to the city's attention. Meaning Steve-o Salisian got caught in the act or, to put it correctly, after the act since this thing had already been built and he never got the necessary city permits first.

So what does Mr. Salisian do after he realizes that he cannot have a fourth rental unit on his property?  He applies for a retroactive Conditional Use Permit (CUP) to allow this illegal structure to remain there and, after taking out the kitchen, tells us now that his 2-story 1,322 structure will only be used as a "recreation and exercise" building.

Steve-o then tells anyone who cares to listen that his family has a vital need for exercise, mostly because of the small size of the other units. I think. All of this despite the fact that it was initially built as a rental unit.

OK. But even worse, and as can clearly be seen in the first video, Steve-o arises from his Council Chamber seat and repeatedly gets his Pinocchio on to the Planning Commission about the special circumstances of this construction. On the one hand he states that the work is more than adequate, while on the other claiming that he did it all himself with no experience whatsoever.

Steve-o also represents to the Planning Commission that he had absolutely no idea that he was building an illegal unit, no idea that permits were required in Sierra Madre (really?), and had no knowledge of the approval process someone has to go through here.

There is also a liability issue for the City of Sierra Madre. If the city approves a building that, according to Mr. Salisian's own testimony, was done without any experts whatsoever to insure the health and safety of anyone dwelling inside this structure, bad things could happen. God forbid if it were to collapse Third World style in an earthquake and kill somebody. Or at least crush all of that expensive exercise equipment.

We can also ask (and based on the fascinating Steve-o Salisian's apparent inability to appreciate much in the way of local development processes), what are the odds that he would later convert his "recreation and exercise" room back into a rental unit? I'd say they are pretty high.

As anyone can clearly see, this is about as flagrant a violation as you will ever get to witness. In this case, the cover-up is probably equal to the crime. People have worked very hard to put reasonable rules in place to prevent this kind of activity. As have most American cities. What kind of message does it send to developers, builders and unscrupulous homeowners if this is allowed to stand? It would certainly set a very bad precedent.

As can be seen in the video highlights, the Planning Commissioners are the experts. The City Council should not overturn their decision. In fact, the only solution is to make the applicant tear this building down and start over.

Time to get some red tags ready.

One more Salisianism for the road 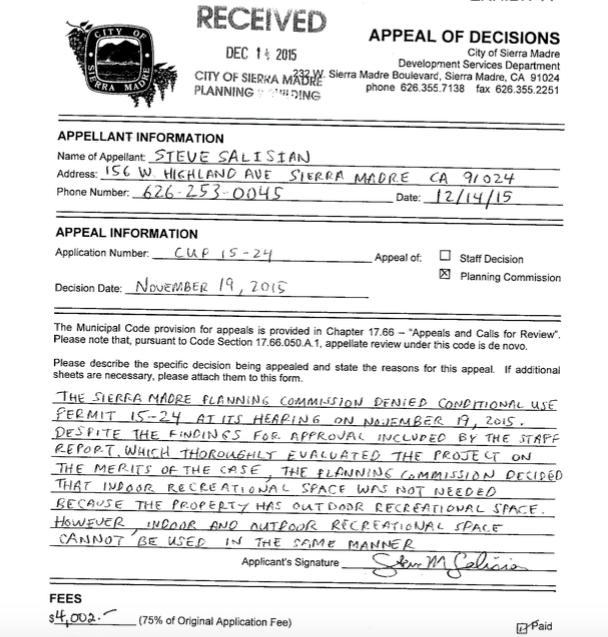 Whatever you say, Steve-o.