Who Is Supporting Bulldozer Bob Harbicht In His Run For Arcadia's City Council?

Let's face it, Bulldozer Bob Harbicht has been hanging around Arcadia City Hall since right around the time dirt was invented. Maybe even before. Trained archeologists are working on that. Here is some biographical information on just how long this developer bought and paid for relic from some politically distant past has been shuffling around Arcadia's corridors of power.

Bob has served 20 years on the Arcadia City Council, longer than anyone in the 112-year history of the city. Because of the city’s term limits rule, his 20 years have been spread over a 30-year period. He left the Council 18 months ago because he reached his term limits again. Bob is very concerned at what has happened to Arcadia in the short time he has been off the Council. He plans to run again in the April, 2016 election.

And what is Bulldozer Bob the most concerned about? The residents of Arcadia getting involved in deciding how development in that city should be planned for and implemented. You know, effective and meaningful citizen democracy. Bulldozer Bob hates that kind of stuff. And why? Because it upsets those who have been giving him a lot of campaign cash over the last millennium or so to further his seemingly eternal political career at Arcadia City Hall.

Bulldozer Bob likes to posit himself as being the voice of reason in town, and as such has the right to call all of the shots for you. Preferably without having to listen to any of your annoying opinions. He just knows so much better than you do.

So who does B-Bob answer to? That would be the Arcadia real estate and development establishment. Those folks who somehow believe that they have the God given authority to run roughshod over the rights of Arcadia's residents in the name of "property owner rights." Property owner rights being a cynically applied concept that, when in effect, permits big money developers to build whatever they like at the expense of all those annoying little people. All without them having any say in the matter.

Bulldozer Bob prefers that residents be seen and not heard. Like the well-mannered children back when he was young.

So who owns the strings to this authoritarian establishment artifact? Here are a few pictures that should clue you in on what's up. Check out where these strategically positioned Bulldozer Bob Harbicht signs are now being found.

One of the really big donors to the Bulldozer Bob Harbicht campaign for his 83rd term on the Arcadia City Council has been something known as Continental Assets Management. So who are these dudes? An article published in the Pasadena Star News offers us this insight (link). 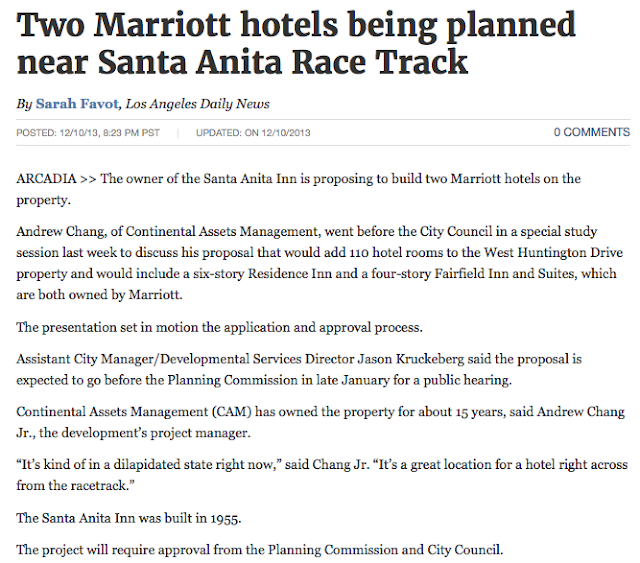 So there you go. Continental Assets Management is a front for Andy Chang, a McMansion developer of some note.  He owned the Santa Anita Inn and was going to build 2 new hotels there. But somehow never did.

Andy Chang is an Arcadia resident and has been investing in big house residential development there for quite a while. Something that makes him a Bulldozer Bob Harbicht kind of guy.