Dearest Amy: I Found Your Nose. It Was In My Business

Mod: I get comments from time to time that suggest I somehow do not have the right to do this blog. These criticisms are often personal. I think that is because some don't actually understand the issues we discuss here. I received the following from someone named Amy, and here is how our moment went.

Tattler: Because I completely enjoy doing it, Amy. I lived in Sierra Madre for 15 years and still have a lot of friends here. As I do in Arcadia, Pasadena and the other SGV towns this blog covers. When I moved out a lot of people asked me if I would keep writing, and I said that I would. Besides, 3 to 4 thousand people a day read The Tattler. So now I am supposed to stop writing it because you don't like what I have to say? It seems obvious to me that you are far more concerned with silencing people you don't agree with than anything else. Especially those folks who are politically and personally empowered by this blog.

What makes you believe you have the right to tell people what they can or cannot do, read, contribute or say? Certainly that sense of entitlement can't come from anything you know, or have accomplished. Personally I think your pique stems from a small town animus to anybody who isn't exactly like you. Anyone who doesn't belong to your small circle of identically thinking pals, or is not content to live in an information vacuum. If you don't like this blog, then go read something else. Trust me, I won't lose a moment of sleep over it.

Mod: This next one appeared on the No On UUT Facebook page. Apparently Scarlett, who lives in Pasadena, thinks I own that page. I do not. I suspect Scarlett's problem with The Tattler stems from the fact that her husband is a retired government employee, and receives an immense yearly CalPERS haul. Yes, it is always about the money. Scarlett's message also has a whiff of madness to it. Particularly her stated support for the right to a free exchange of ideas, but only so long as everyone understands that not agreeing with her is an evil incarnate.

Scarlet: I hardly ever voice my opinion politically, but I feel that I have to finally speak up. This is one the ugliest most hateful sites I have ever seen!! This site brings out the worst and ugliest in America. I had the most horribly enlightening opportunity to listen to one of these hate mongers attack everyone at the last council meeting. Please everyone!! Go by what you know and love in your heart. Not by people that are trying to destroy all that we value in our wonderful town and lives!!

After this speaker who went way over the allotted 3 minute non-agenda items (she'd probably still be talking!), my daughter gave a wonderful speech that got a standing ovation and clapping. Even if we disagree on many issues, that is our right and gift as Americans. But we need to continue to respect our differences without hate and war mongering and work together for our common good!!

Mod: Like I said, the agitated Miss Scarlett's Facebook page identifies her as being a Pasadena resident. Which pretty much explains her belief that voicing opposition to an unfair tax hike in Sierra Madre is tantamount to "hateful war mongering."

Mod: In keeping with their belief that anyone who disagrees with them is a warmonger, the "Yes On Measure UUT" Facebook zoo launched a series of smear attacks on Barry Gold. They then refused to allow him to post anything there in his defense. However, so loud was the outcry over this ugly censorship, even from some of the people supporting Measure UUT, that Eddie Garcia and the other dotty dictators running the site caved in. Here is Barry's account. 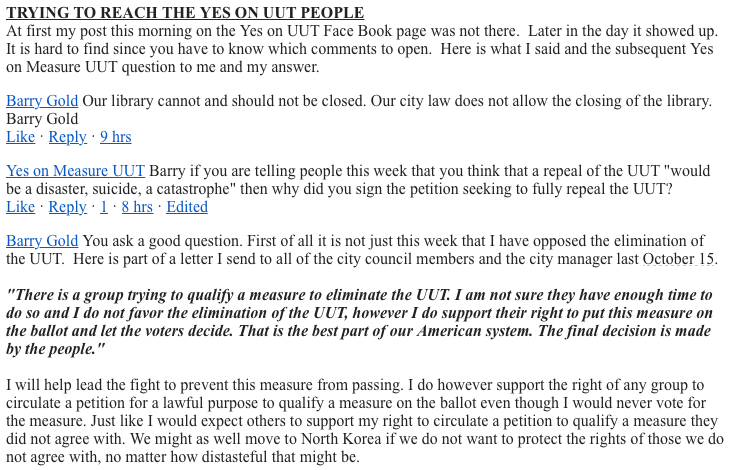 Mod: Barry also made this rather profound observation.

Mod: Pretty much nails it. The Yes On Measure UUT people seem to believe that they have the right to demonize and attack any neighbor who opposes a tax hike in this town. It really is very strange behavior, and you have to wonder what it is they base that on.