Mod: The following is on the schedule for tomorrow night's City Council meeting (link). 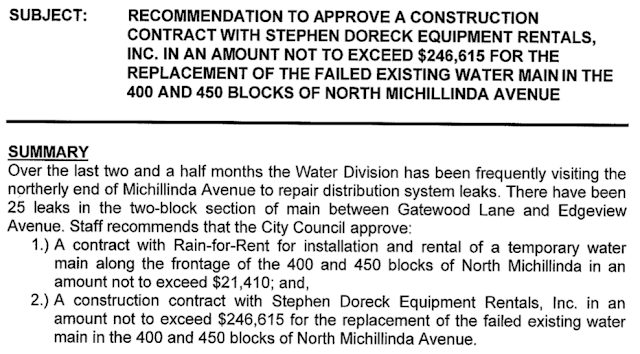 Mod: Bruce Inman's rush to judgement contracting predilections are apparently at play here once again, and this has raised concerns for at least one Sierra Madre resident. The following email went out to the City Council over the weekend.

At Tuesday’s City Council meeting, City Staff will be asking you to approve an “emergency” contract with Stephen Doreck Equipment Rentals (“Doreck”) for a quarter of a million dollars to replace a water main, bypassing the normal bidding process.  The report notes that Doreck has worked for the City previously and states “Staff has had no problem with the firm’s work quality or scheduling.”  This statement by City Staff is extremely troubling.

Our property, and our neighbors’ property, were significantly damaged by Doreck during the company’s September 2014 installation of the Mountain Trail water main.  Doreck personnel failed to exercise due care in re-connecting the new water main and their error created a huge water pressure surge, more than a normal household system could tolerate.

At that time, City Staff were well aware of what happened, and also aware of the fact that, adding insult to injury, Doreck refused to reimburse us for the damage done until we filed a case against them in Small Claims Court.   Only then did Doreck did reimburse us for our repairs and for all the wasted water.

How can the City’s Staff tell you they have “no problem” with a company that has previously done significant damage to Sierra Madre homeowners, let alone recommend the company receive a no-bid $250,000 contract?

Mod: So what is the rush? This water main has been around since the Roosevelt era. The extra month required to properly bid this out for repair is suddenly the end of the world?

This from the Mountain Views News

A couple of things that we can take away here. The first being Chief Giannone is having a hard time finding people willing to take the job. So much so that he is actually asking Sierra Madre residents if they would be willing to sign on. Has that ever been done before?

The second? It appears that the LA County Sheriffs are going to be in Sierra Madre for a lot longer than anyone at City Hall has been willing to admit. Including the elected ones. Meaning that $100,000 a month hit will go on for quite a while.

Of course, the cost of maintaining separate day and night police forces is not cheap. About $1.4 million a year in additional expense is my guess.

Propping up a sacred cow Sierra Madre Police Department could end up being one of the most expensive things the city has ever done. Not exactly what the city was supposed to be doing with that utility tax hike.