We have been monitoring the situation in Encinitas for a while now, and it appears that some news about our twice used carpetbag's latest political ambitions is starting to leak out.

Encinitas Undercover, which functions as a kind of Tattler for that now at-risk city (their opinion might differ), yesterday listed Joe Mosca as one of the potential City Council candidates there. Yes, it really does seem like it is deja vu all over again down suburban San Diego way, as we shall soon explain.

So where and when did this story first begin? It was first revealed as part of an article published last year in a weekly newspaper there called the Encinitas Advocate (link), and we were fortunate enough to pick up on it fairly quickly. Here is how they first announced the emergence of Joe Mosca on the Encinitas political scene back in September of 2015.

As a commissioner, Mosca said he’d like to focus on maintaining and highlighting city hiking trails.

Those who are familiar with Joe's political activities in Sierra Madre immediately picked up on an obvious pattern (link). The carpetbagger who almost immediately jumped into local politics shortly after arriving, in a traditional small California city in severe risk of falling prey to predatory and destructive development, all while claiming to be a staunch defender of community traditions he did not even know existed a year earlier.

Did I get it all?

As we saw in this town, the Joe Mosca who ran for a City Council seat as a slow growth preservationist quickly became the willing attack dog for developers once he was elected to office. So is he now going to try that one all over again? Why? Is it now a career choice?

Here is how Encinitas Undercover broke the news yesterday (link). 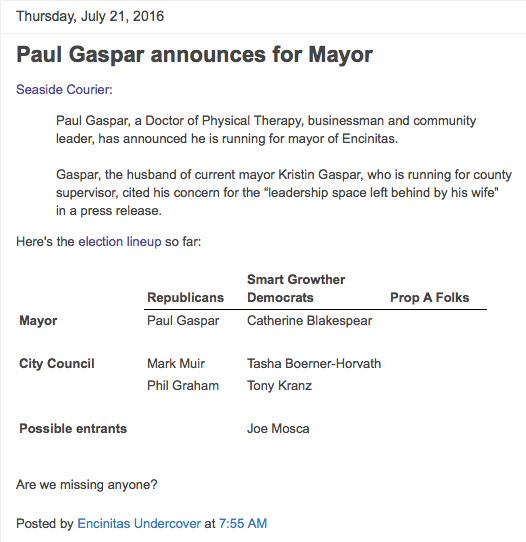 We'll keep an eye out to see if this one goes anywhere. Hopefully it was all just speculation.

Mod: I know it isn't a very flattering comparison. Then again, why anyone in Sierra Madre would want to make a developer president is beyond me.

Bill Maher on Trump’s Scary RNC Speech: ‘He Looked a Lot Like Mussolini’ - The host of ‘Real Time’ railed against the Republican presidential nominee’s speech at the Republican National Convention: ‘It was just really about death.’

“He looked a lot like Mussolini tonight,” said Bill Maher. “Did you see that? He would say something and then [shake his finger].”

The outspoken political satirist had, like many Americans, just witnessed the Republican National Convention’s closing speech delivered by their nominee, Donald J. Trump. And boy, was it a grim affair.

Terrorism. Immigrants. Joblessness. More terrorism. In Trump’s mind, America is a country on the brink of total and utter collapse, where people are drinking their own urine, knifing each other for bread and water, and making themselves shiny and chrome before hurling their emaciated bodies at oncoming traffic.

“And of course the people in the hall loved it,” Maher added. “They were like, ‘Finally! A candidate who can bring this country apart!’”

Mod: I would have included selling out NATO for the benefit of Vlad "The Impaler" Putin, but maybe that is just me. Free Estonia. For the rest click here.