The Bowling Green Massacre Comes To Pasadena? Terror War On The Cheesecake Factory

Mod: There has been a lot of news lately about a "bombing" at the Cheesecake Factory restaurant in the fashionable Old Town district of Pasadena. A few of the early reports were quite gaudy, though some later accounts did step down the hysteria.

The terrorist threw an explosive inside the restaurant, The Cheesecake Factory said in a statement: “This evening an incendiary device exploded within our Pasadena restaurant. Thankfully, none of our guests or staff was injured. Law enforcement is actively investigating the incident and we hope to reopen on Friday, as usual.” 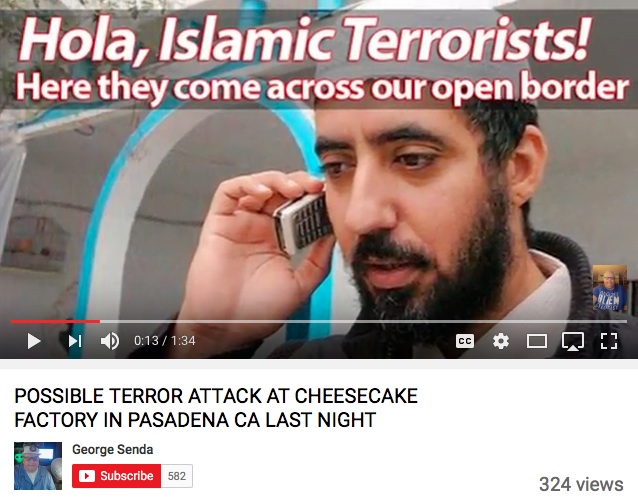 Cheesecake Factory Bomb-Thrower Wanted In Pasadena (CBS News Los Angeles link): The public’s help is needed Friday to identify a man who threw a homemade explosive device into the Cheesecake Factory restaurant in Pasadena. No one was hurt in the blast, which was reported at 6:08 p.m. Thursday at the restaurant at 2 W. Colorado Blvd.

The restaurant was immediately evacuated and officers located the detonated homemade pyrotechnic device, according to the Pasadena Police Department. The Los Angeles County Sheriff’s Department Bomb Squad also responded to the scene and rendered the device safe, police said.

“Pasadena Police detectives are currently handling the investigation and out of an abundance of caution the federal authorities have been notified,” a Pasadena police statement said. The motive is not known.

Witnesses described the suspect as either Hispanic or Middle Eastern, 6 feet tall, with a thin build, a heavy beard, all black clothing and a black beanie.

Pasadena police told the Hollywood Reporter that shortly after 6 p.m. Thursday evening, a man reportedly opened the door and threw the lit device inside the restaurant before fleeing. Although the bomb exploded on an empty table, no one was hurt in the incident.

"Officers immediately entered the restaurant and evacuated customers and employees and located a detonated homemade pyrotechnic device," Pasadena Police Detectives (PPD) said in a statement. "The Los Angeles County Sheriff’s Department Bomb squad responded to the scene and rendered the device safe. No customers or employees were injured during the incident at the restaurant."

Mod: So those were some of the earlier reports. A day or so later the Pasadena Star News began to sift things out a little, and the event started to look less dire.

Small explosive device thrown into Pasadena Cheesecake Factory; mayor compares it to ‘firecracker’ (Pasadena Star News link): Authorities continue to look for a man who threw what was described as a “homemade pyrotechnic device” containing gunpowder into a Cheesecake Factory restaurant in Old Pasadena on Thursday.

Pasadena police Lt. Art Chute said the device exploded but no one was injured in the incident, which happened just after 6 p.m. at the restaurant at 2 W. Colorado Blvd. The incident garnered national attention, social media speculation and was a top trend on Google. On Friday, officials sought to put the incident in perspective while offering some details about what transpired.

The incident didn’t warrant a briefing for Pasadena Mayor Terry Tornek, which he considered an indication of how minor the incident was on the city’s radar. “In the great array of things happening in Pasadena, this is not a huge one,” he said. “It was sort of business as usual this morning.”

Tornek said he was driving by the Cheesecake Factory on Thursday after leaving dinner and saw the police cordoning off the area. He said the device was “more related to a firecracker than a bomb.”

How internet hysteria turned smoke-spouting ‘pyrotechnic device’ at Pasadena Cheesecake Factory into an imaginary ‘bomb’ (Pasadena Star News link): A man in all black clothing walked into a Cheesecake Factory on Thursday evening and threw a ball-shaped object that popped loudly and created a cloud of smoke.

The incident caused a scare and an evacuation, but resulted in no injuries or property damage, according to officials. The restaurant reopened Friday morning on time and welcomed customers like any other day.

Overnight, the story went national and became a top trend on Google. The “homemade pyrotechnic device” described by police turned into an explosive, then a bomb and was even referred to as an IED, or improvised explosive device, on Twitter.

But few locals were as concerned. The “bomb” did little to deter people from heading to Cheesecake Factory for lunch. Across the street, people at a cafe joked and speculated while waiting for their coffee.

Pasadena Mayor Terry Tornek said the police department is taking the matter seriously, but officials meeting Friday morning for a leadership council at City Hall didn’t discuss the incident at all. The device was “more related to a firecracker than a bomb,” he said.

Heather Rosoff is a research professor at USC’s Center for Risk and Economic Analysis of Terrorism Events. She said the reaction to the Cheesecake Factory explosion is a phenomenon called social amplification.

People’s fears about the state of the world, combined with the media’s phrasing of articles about the incident, made it more likely people would treat the device like an act of terrorism. Two decades ago, they may have thought of it more as a prank. But now they’re flooded with stories about bans on Muslims, attacks in other countries, nuclear threats and uneasy relationships with other world powers, Rosoff said.

Mod: They never did catch that bearded bomb throwing guy in the black beanie, and this story began to wind down a little. Except for this shocking report from yesterday.

CAR CRASHES INTO PASADENA CHEESECAKE FACTORY WHERE EXPLOSIVE WAS DETONATED (ABC7.com link): It was another scare this week at the Cheesecake Factory in Pasadena after a car slammed into the building.

Two cars crashed at the intersection of Fair Oaks and Colorado Boulevard at about 4 p.m. Saturday, sending one of the vehicles smashing into the restaurant. Though glass windows at the restaurant were shattered, no one was seriously injured, according to the Pasadena Fire Department.

The crash came just two days after someone threw a homemade explosive device into the business. No one was hurt during that incident, and the suspect was still on the loose.

Mod: Where will it all end?