Mod: Tony Brandenburg wrote about this dirtbag a couple of days ago (link). But, as a refresher, Milo Yiannopoulos is one of the reigning star editors at the website Breitbart. Milo is so highly regarded in certain of the more countercultural alt-right circles that he has been scheduled as the keynote speaker at this year's Conservative Political Action Conference, or CPAC. A very big deal event for celebratory reactionary types. Breitbart is the famous so-called conservative fake news source that Steve Bannon helped to create. And Steve, as you must know by now, is today one of the most trusted and closest mighty whitey advisors to President Trump. Quite a little daisy chain for us to contemplate on this President's Day, right? So when a noted Breitbarter of Yiannopoulos's considerable stature is captured on tape advocating for pedophilia, it is a big event and needs to be as widely discussed as possible. Here is how the website Occupy Democrats puts it.

“We get hung up on this sort of child abuse stuff,” Yiannopoulos is heard saying in a video, “to the point where we are heavily policing consensual adults.”

“In the homosexual world, particularly, some of those relationships between younger boys and older men — the sort of ‘coming of age’ relationship — those relationships in which those older men help those young boys discover who they are and give them security and safety and provide them with love and a reliable, sort of rock, where they can’t speak to their parents,” he added.

The comments are, of course, completely unacceptable.

“But you know what? I’m grateful for Father Michael. I wouldn’t give nearly such good head if it wasn’t for him,” Yiannopoulos replied, using a euphemism for male oral sex.

The story was broken by the far-right conservative media outlet The Blaze only 24 hours after it was announced that Yiannopoulos was scheduled to speak at the Conservative Political Action Conference (CPAC).

Unfortunately for Milo, video exists and there will be little he can do to claim he didn’t openly and proudly defend child rape, molestation, and pedophilia.

Mod: Let's go to that video tape, shall we?


Mod: Here are some biographical tidbits on Yiannopoulos from Wikipedia (link).

Mod: Recently Yiannopoulos was scheduled to speak at UC Berkeley. His mere presence there was the cause of a riot, however, and the event had to be canceled. President Trump was so incensed by this turn of events that he actually threatened to defund UC Berkeley. Here is a Huffington Post article that describes Trump's anger over what happened there to his favorite advocate for man-boy love.

Yiannopoulos, an editor at Breitbart, had been invited to speak at the university by the Berkeley College Republicans, but Wednesday’s event was called off after protests against him turned violent. Trump didn’t refer to Yiannopoulos by name, instead referring to “innocent people with a different point of view.”

Over 1,000 people gathered on Wednesday to protest Yiannopoulos, who was kicked off Twitter last year after he led a brutal harassment campaign against comedian Leslie Jones. The Breitbart editor, the self-proclaimed “most fabulous supervillain on the internet,” has been accused of using hate speech to incite his followers.

“In our view, Mr. Yiannopoulos is a troll and provocateur who uses odious behavior in part to ‘entertain,’ but also to deflect any serious engagement with ideas,” Berkeley Chancellor Nicholas Dirks said in a statement last week, noting that it’s unconstitutional for public institutions to ban “expression based on its content or viewpoints, even when those viewpoints are hateful or discriminatory.”

Yiannopoulos is a vocal supporter of the so-called alt-right, a white nationalist movement.

Trump’s comments were posted shortly after Fox News aired a segment on the event, with host Todd Starnes also calling for the school to be defunded.

It’s not entirely surprising that Trump would defend the notorious Breitbart editor. He also hired Steve Bannon, a former Breitbart executive with ties to white nationalism, to be one of his top advisers. 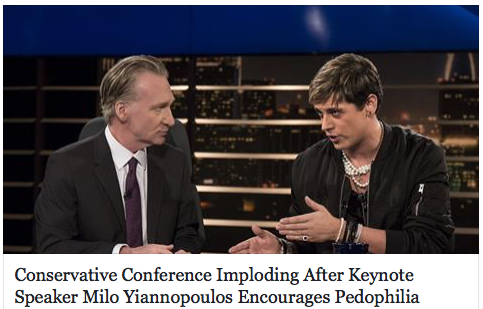 The largest conservative conference of the year – known as CPAC – is in the process of self-immolation after the invited keynote speaker, professional bigot Milo Yiannopoulos was recorded not only defending pedophilia but actually encouraging it.

In a hangout session recorded and posted online, the Breitbart writer is seen explaining to the group (including one person inexplicably wearing a wrestling mask) why raping children isn’t always bad. His justification was horrific.

“This arbitrary and oppressive idea of consent, which totally destroys the understanding that many of us have of the complexities and subtleties and complicated nature of many relationships.”

The relationship he was specifically referring to was talking about an adult having sex with a 13-year-old boy. Even the guy in the wrestling mask seemed embarrassed to be a part of this.