I don't want you to think that the new City Manager's attempt at transparency is an awful thing. It is not. This all appears to be an honest attempt at revealing Sierra Madre's debt problems to its largely oblivious taxpayers, people who bear as much responsibility for this dilemma as anyone else. After all, if the majority of residents here had actually involved themselves with this city's affairs, rather than smoking the fruit flavored Civility Crack being so generously handed out by City Hall over the last decade and a half, things might be different now.

It really is an attempt at transparency, and you'll have to go all the way back to the administration of Mayor MaryAnn MacGillivray to find something similar to what Engeland is attempting. After which MaryAnn was roundly vilified and smeared by some of those actually responsible for getting the city into the financial peril it faces now, and then voted out of office.

The responsible individuals do take this stuff seriously. They have been working to cover their butts for years. Thankfully Engeland has a contract.

But there are problems with City Manager Engeland's approach, and I thought I should point out a few of them. The first is the timing. Sierra Madre's debt problems are amongst the most severe difficulties it has ever faced. Why would you want to reveal them by social media alone, and right before the four day 4th of July weekend? Most people in town are oblivious enough as it is, why would you want to reveal something this important while the intended audience is all off celebrating itself through eating barbecue and getting drunk on craft brew and expensive wine?

Below is a screen shot taken yesterday at around 2:30 in the afternoon. Which was a few hours before I was scheduled to go off and eat barbecue and drink some of Upland's finest craft brew. I'm assuming I had a good time. As you can see, Engeland's bombshell report gets a mere 10 "likes" on the City's Facebook page, plus a single rather lonely "share." Which turned out to be from the Sierra Madre Police Department's Facebook page. You have to wonder why the cops would have done that. After all, they are a major source of the city's financial problems. 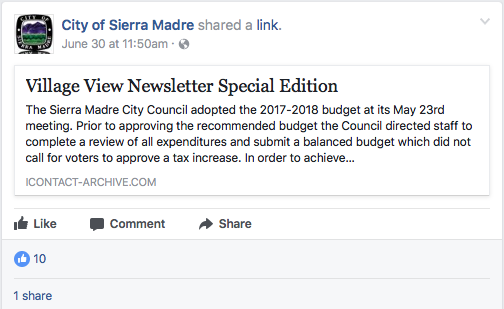 Not one single comment, either. This is not a thunderclap of response, even from Sierra Madre's infamously other-directed citizenry. But perhaps that is the point.

Which brings us to the next problem. Why wasn't this information presented as a stand-alone public hearing item at a City Council meeting? Where people, should they be moved to do so, might have actually been able to ask questions? Or express appreciation, or doubts, about the City Manager's findings? They could also have found out where the City Councilmembers actually stand on this matter. Sending all of this out as part of an e-mailed newsletter, one that does not invite comment or speculation, does look like an attempt at suppressing debate. That is, assuming there would have ever been one.

The final gripe I have with this report is it in no way communicates how Sierra Madre got to this financially precarious point in its history. Who are the unhappy individuals responsible for setting this city up with interest-only payments on a $6.75 million dollar water bond for a decade and a half? In the process blowing that entire debt up to just under $15 million resident dollars?

What was their motivation for doing so? Could it have something to do with the demise of the Downtown Specific Plan and the loss of the income it might have produced? Was this water bond money obtained to build infrastructure for that failed development, one that would have only profited a selfish few? Including some of those who actually arranged for this bond in the first place?

And then, which City Council signed on for turning Sierra Madre into a CalPERS city? Was this unfortunate blunder committed by short-sighted local politicians in order to curry the political favor of this city's municipal employee unions? A bribe, as it were? Paid for by increasing utility tax rates? With absolutely no regard for the long term financial consequences, all of which are coming due right about now?

My concern here is this "special edition message" is merely checking off a box in a public relations process that will inevitably lead to another tax increase. The debt news has been shared, so now you have to pay for it. No further questions asked, please.

The new City Manager's report only deals with the numbers, unfortunately. I guess that is better than the nothing we've been getting up until now.