The SMPD's War on the Bagpipes 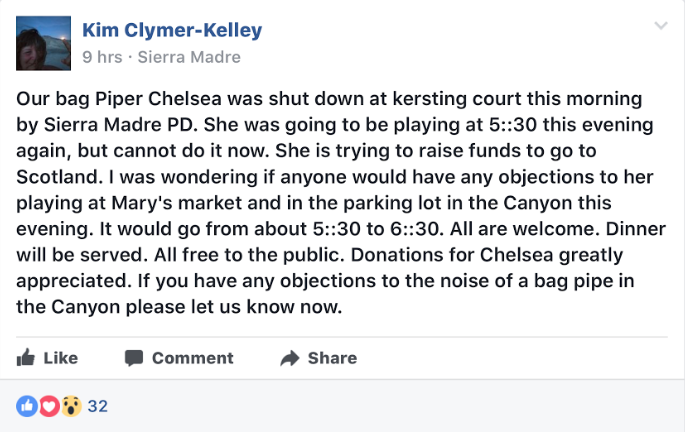 There had been several allusions to this unhappy occurrence in the comments here on The Tattler, and now a much beloved soul has forwarded to me the above item, which was originally posted on a certain Sierra Madre Facebook page. One which has unkindly blocked me so that I am incapable of finding such shocking news by myself.

Which is fine. Not everyone is born with the capacity to share. Hopefully their personal shortcomings have not made their dyspeptic lives too much to bear.

So what this kerfuffle is all about is a noted local bagpiper by the name of Chelsea has somehow gone and raised the killjoy ire of the Replacement Sierra Madre Police Department. So much so that they have now taken decisive action against any public bagpipe performance in Kersting Court by this artist.

Apparently somebody heard something, said something, and in swooped the forces of a Fife-ish oppression to shut Chelsea down.

But there is now local resistance to such injustice, and wouldn't you know it the epicenter of this rebellion is none other than Mary's Market up there in Sierra Madre's noted, yet pricey, Canyon Zone. I think the free dinner in honor of our brave piper has already been held, but certainly Ms. Clymer-Kelly's brief missive has shown the bold spirit deep inside of all that.

Mod: Speaking of the bold spirit of The Canyon, apparently the green rush is not going to be as fruitful as some might have hoped.

California has too much pot, and growers won't be able to export the surplus (Los Angeles Times link): A leader of California’s marijuana industry warned Wednesday that the state’s cannabis growers produce eight times the pot that is consumed in the state so some will face “painful” pressure to reduce crops under new state regulations that will ban exports after Jan. 1.

Some marijuana growers will stay in the black market and continue to illegally send cannabis to other states, which is also not allowed under federal law, said Hezekiah Allen, executive director of the California Growers’ Assn.

“We are producing too much,” Allen said, adding state-licensed growers “are going to have to scale back. We are on a painful downsizing curve.”

He said some marijuana growers may stop, while others just won't apply for state permits.

Allen made his comments to the Sacramento Press Club during a panel discussion that also included Joseph Devlin, chief of Cannabis Policy and Enforcement for City of Sacramento, and  Lori Ajax, chief of the state’s Bureau of Medical Cannabis Regulation.

Devlin said estimates he has heard put California production at five times the state consumption; one consultant in the audience said the number may be 12 times what is consumed in the state.