Mod: The Pasadena Star News has finally gotten around to publishing an article on the topic of selling off the Sierra Madre Library's property and moving all of its books and historic horseshoe nail collections to in back of the YAC, but it is really kind of disappointing. Rather than telling both sides of the story, it reads a lot like an advertisement for what the Friends of the Library have been pushing. Here is a portion of that article for your reading eye, with a helpful link that will take you to the whole thing if that is what you actually want.

Will Sierra Madre’s library finally get upgrade, or move to new location? (Pasadena Star News link): The city’s aging library building could cost the city millions, whether it stays in the same location or not.

The City Council voted last week to approve using funds raised by the Friends of the Library for professional architectural and appraisal services as part of a proposal to move the library to the current youth activities center.

The Friends authorized the expenditure of up to $100,000 for the services.

Friends President Margaret Quigley said the nonprofit group has been raising and saving money for more than 30 years with the aim of contributing if funds for an expansion and renovation became available.

Staff reports show about $1.4 million is needed to do basic upgrades and repairs, including fixing dozens of potential violations of the American with Disabilities Act, the federal law that requires facilities be able to accommodate everyone.

“We’re one ADA lawsuit away from closing the library,” said Rich Procter, a Library Board of Trustees member.

A complete upgrade and expansion to the current building, 440 W. Sierra Madre Blvd., to serve the increasing number of patrons and programs offered, is expected to cost about $3.8 million, according to city staffers.

Mod: So is it $1.4 million or $3.8 million? Either number seems like a lot of money just to build some cement wheelchair ramps and rewire the place. You might want to click on that link and read the rest.

So what happened to "National Night Out" in Sierra Madre?

Mod: So it is suddenly August 1st, and traditionally this is the evening when everyone is expected to go hang out and talk with the Sierra Madre Police Department about all things law enforcement and public safety. But apparently that won't be happening here this year. What follows is an only marginally informative article from the Mountain Views News, one that doesn't explain very much. 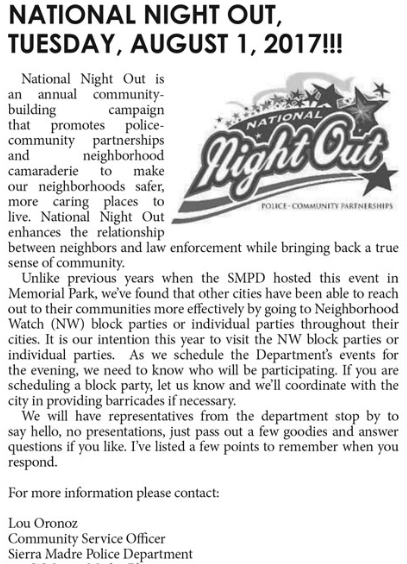 Mod: Despite what you have read above, other cities will be holding National Night Out events. Here are some of them. Maybe you should go to one of these? 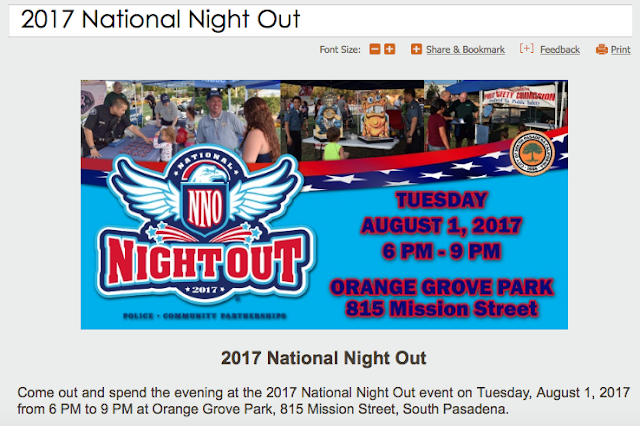 Mod: I am not sure Officer Oronoz is leveling with us. It sounds to me that perhaps the SMPD would just rather take the night off.