Mod: Who wouldn't want the mentally insane to be able to get their hands on semi-automatic weapons? Certainly not the great President Trump. Who knows, maybe it's because he's a little bit nuts himself? The following is from February of this year.

Trump Signs Bill Revoking Obama-Era Gun Checks for People With Mental Illnesses (NBC News link): President Donald Trump quietly signed a bill into law Tuesday rolling back an Obama-era regulation that made it harder for people with mental illnesses to purchase a gun. The rule, which was finalized in December, added people receiving Social Security checks for mental illnesses and people deemed unfit to handle their own financial affairs to the national background check database.

Had the rule fully taken effect, the Obama administration predicted it would have added about 75,000 names to that database.

President Barack Obama recommended the now-nullified regulation in a 2013 memo following the mass shooting at Sandy Hook Elementary School, which left 20 first graders and six others dead. The measure sought to block some people with severe mental health problems from buying guns.

The original rule was hotly contested by gun rights advocates who said it infringed on Americans’ Second Amendment rights. Gun control advocates, however, praised the rule for curbing the availability of firearms to those who may not use them with the right intentions.

Trump signed the bill into law without a photo op or fanfare. The president welcomed cameras into the oval office Tuesday for the signing of other executive orders and bills. News that the president signed the bill was tucked at the bottom of a White House email alerting press to other legislation signed by the president.

The National Rifle Association “applauded” Trump’s action. Chris Cox, NRA-ILA executive director, said the move “marks a new era for law-abiding gun owners, as we now have a president who respects and supports our arms.”

Everytown For Gun Safety President John Feinblatt said he expected more gun control rollbacks from the Trump administration. In a statement to NBC News, he called the action "just the first item on the gun lobby’s wish list" and accused the National Rifle Association of "pushing more guns, for more people, in more places."

The NRA’s last tweet tells you everything you need to know about what’s wrong with American gun laws (Think Progress link): As is their practice in the wake of a mass shooting, the National Rifle Association’s social media accounts have gone dark. Since the horrific shooting in Las Vegas, Nevada that left 59 people dead and over 500 injured, there has been nothing from @NRA or associated accounts like @NRATV, @NRAblog, and @NRAILA.

The most recent tweet from any NRA-affliated Twitter account appears to be from @AmericanHunter, the “official journal of the National Rifle Association, for hunters and shooters,” posted just hours before the shooting.

The FN SCAR 17S is a slightly modified version of the rifle currently used by U.S. Special Operations Command, the FN MK 17. Its manufacturer touts the weapon’s “long-range accuracy, downrange power, exceptional reliability.” But even the manufacturer’s excitement over this weapon, which was designed for the military to kill people, pales in comparison to the NRA.

In an NRA-produced video, American Hunter managing editor Jon Draper is absolutely giddy about massive power of the FN SCAR 17S. Draper traveled to the test range of the manufacturer, FN, where he spoke to Jay Recto, the “assault weapons manager.” After being taken through some of the rifle’s features by Recto, a giddy Draper declares: “Literally, this is the same rifle that the military gets without the full auto happy switch. That’s fantastic!”

“Exactly, you don’t have the happy switch, that’s about it,” Recto agrees.

This, of course, illustrates the problem with America’s lax guns laws. Current law allows the sale of slightly modified military rifles, which are not designed for hunting or recreation, but to kill many people in a short period of time. The FN SCAR 17S lacks the full automation of its military counterpart, but many semi-automatic weapons can be modified to operate similarly to a fully automatic weapon.

The 2016 Pulse nightclub shooting, which until Sunday was the deadliest mass shooting in modern U.S. history, also involved a weapon originally designed for the U.S. Special Forces, a Sig Sauer MCX.

U.S. law currently allows civilian purchase of weapons that were designed to kill people quickly, not for hunting, recreation or self defense. These weapons can be modified to make them even more deadly. The NRA, meanwhile, fights for everyone to have unfettered access to these weapons.

Mod: This golden moment is from last June. 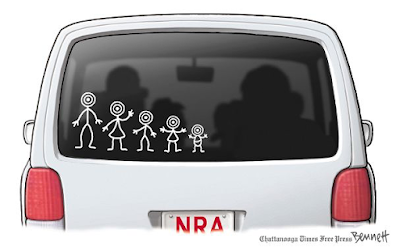 Donald Trump Slams 'Weak' Leaders After Orlando Shooting (Time Inc. link): Donald Trump on Sunday slammed the nation's "weak" leaders in new comments about the deadly Orlando nightclub shooting, following backlash he received on Twitter for his initial response about the “congrats” he’s gotten for “being right” on terrorism. The presumptive Republican presidential nominee criticized President Barack Obama for “disgracefully” refusing to say the words “radical Islam” while addressing the nation on the massacre at the popular Pulse Orlando gay nightclub that left 50 dead and another 53 wounded. Trump also called out opponent Hillary Clinton for failing to use that exact phrase.

“Last night, our nation was attacked by a radical Islamic terrorist. It was the worst terrorist attack on our soil since 9/11, and the second of its kind in 6 months. My deepest sympathy and support goes out to the victims, the wounded, and their families,” Trump said in the statement.

“If we do not get tough and smart real fast, we are not going to have a country anymore,” he added. “Because our leaders are weak, I said this was going to happen – and it is only going to get worse. I am trying to save lives and prevent the next terrorist attack. We can't afford to be politically correct anymore.”

sierramadretattler.blogspot.com
Posted by The Moderator at 5:15 AM