Mod: It now appears that former Pasadena Star News chief Frank Girardot is back in the rag trade. I am sure it seemed like a good solution to certain problems at the time. The things we did in our younger years often do when we're being forced to come up with something quick. I'd like to find me a gig that pays six figures to put CDs into retail outlets. Except that I probably won't since nobody buys shiny discs any more. Or at least nowhere near as much as they once did. I am sad to say.

A little background here. Frank left his position as the Star News self-styled crusading journalist a while back to go to work for a real estate development outfit called Singpoli. Apparently for a whole lot of money. Located in Arcadia, it is run by a fellow named Kin Hui, a gent mostly famous for both large scale urban development and those unhappy squat monuments to nouveau riche conspicuous consumption known to many as McMansions.

On the surface Frank was there to operate a public relations firm called Pegasus Media (link). Something he was running in partnership with Mr. Hui, or so Frank claimed. It was supposed to perform as a kind of independently run promotional conduit for companies interested in making headway in the treacherous world of Los Angeles area media. Except that almost all of PM's clients were Singpoli associated entities, and Frank functioned more like an in-house publicist than anything else.

Under that incestuous umbrella, which offices out of the Singpoli building in Arcadia, Frank also became something of a de facto hired social media enforcer for certain development interests. A lot of them also owned, or at least in alliance with, his boss at Singpoli. And also often functioning in partnership with certain oligarchic financial operations and investors out of China.

I think it is safe to assume that none of them were ever interested in preserving the small town community atmosphere of places like Arcadia or Sierra Madre. They just want to build stack and pack development, and then rake in the dough. Woe to anyone daring to stand in their way.

Which brings us up to where we are today. Recently Frank Girardot announced the birth of a new weekly newsprint and website entity called The Hub. Aimed at today's happening youngsters in search of meaning in a world that can often seem confusing at times, it is described by Frank this way.

Welcome to The Hub (link): Let’s take on the elephant in the room first. Yes, we know there are fewer and fewer printed newspapers, tabloids, magazines, pamphlets, and books these days, and that this endeavor — in its printed form at least — flies in the face of conventional wisdom.

That said, we know most of you are reading this explanation on the same phone you used just a few moments ago to send a Snapchat or read a Facebook post, which should tell you that we are a little more conventional than we seem.

But we also know that conventional wisdom is just that — conventional. Not that we want too unconventional or eccentric — but we do believe there is a market for a polished and professional news source in our vast, and ever-changing community. And, with that in mind we created The Hub.

The Hub is a mobile, online and print news resource for Angelenos in their 20s and 30s that will be primarily distributed in downtown LA, Pasadena and Glendale. It is sponsored in part by the Monterey Park-based World Journal, which is venturing into English language media for the first time in its storied history.

All well and good, I suppose. Except I am not sure about either the print or Facebook parts. My kids wouldn't touch an actual printed newspaper if you paid them to, and strongly believe that Facebook is for tedious mid-lifer types hellbent on showing off their weight problems while wearing colorful shorts.

And then, sadly, there is this:

Expect The Hub to include that sort of hard-hitting journalism. Also expect the Hub to delve into the lives of millennials priced out of the region’s expanding housing market and explore the rise of marijuana-themed bakeries as legalization makes its way into the mainstream.

Affiliated with the World Journal, which is the largest Chinese language daily publication in Southern California, the HUB will not only be spot to find curated locally sourced information, it will also contain premium content from the World Journal translated for an English speaking audience.

I am not sure that parents of anyone under the age of thirty are going to see a burning need for a weekly rag that extolls the virtues of "marijuana-themed bakeries." Especially in a free distribution publication that will likely be found stacked up outside of places where kids like to congregate (link).

And as far as being priced out of that "expanding housing market," you might stand a better chance of getting a place of your own if you passed on the pot brownies.

Anyway, and wouldn't you know it, one of the very first articles to appear under the cool and ganja groovy banner of The Hub is a rather nasty hit piece on Arcadia City Councilwoman April Verlato.

So much for that LA, Pasadena and Glendale thing.

As you know, April earned the enmity of Arcadia's more predatory development interests by having the temerity to be elected to office as a highly effective community preservationist. And The Hub, given the origin of its financial backing, not surprisingly shares in that unfortunate animosity (link). 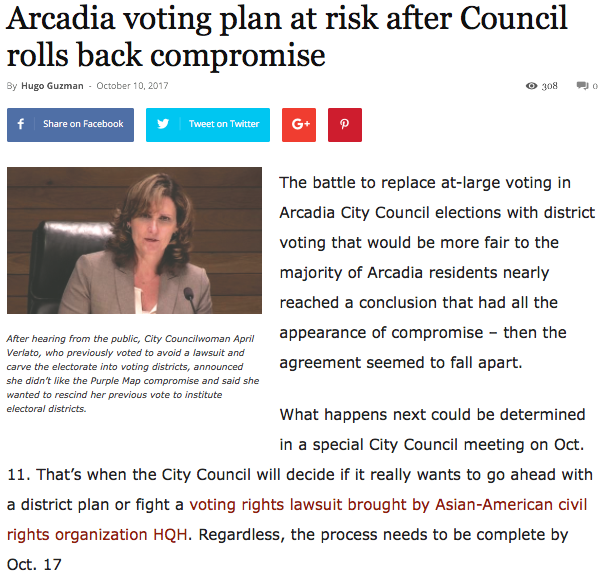 We will have more on this story later in the week.