Can the Library Board of Trustees Really Be This Cynical?

Mod: There is a rather misguided article in the Pasadena Star News today that claims to know what the questions being asked on the NRC Library Survey postcard are going to be. Titled "What that survey Sierra Madre residents are about to receive is all about" (link), the PSN could be correct since practically the only person they bothered to interview for this rather lazy piece happens to be one of the rather partisan people given the privilege of writing them. Here is a portion of that article for your review. 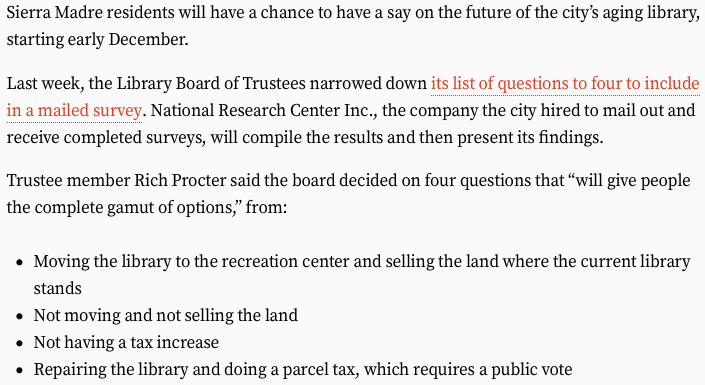 Rich Procter and the Library Board of Trustees have previously come out in full-throated support of moving the Library and selling the property to an as yet unidentified developer, so topics as unfounded as the tax threats identified in this PSN article should be no surprise to anyone over the age of eleven.

This has been a point of contention for a while now, of course. Tasking persons as partisan on the Library question as Rich Procter with writing non-partisan survey questions is a rather like hiring coyotes to guard kittens. But claiming that by moving the Library the city and its residents will be avoiding a tax hike?

So have new depths in the cynicism of the pro-development community in Sierra Madre now been reached? This is pretty shameless, even for them. That one of the people in charge of writing what is supposed to be a nonpartisan resident survey is out politicking like this, and claiming that his special agenda will somehow prevent a tax increase, is a bit beyond the pale.

Where has it ever been conclusively shown that spending $1.3 million to repair the current Library will involve a parcel tax or tax increase? Or conversely, that moving the Library to the YAC, which is rumored will cost anywhere between $3 and $4.5 million when all of the associated construction is done, will not? Especially since the sale of the property the current Library sits on will only raise somewhere in the $2 million dollar range?

There has been no city document or study issued yet showing that repairing the Library will involve a tax hike. Or that by moving the Library into the YAC the city will avoid one. So why will that allusion be on this survey postcard? Procter's claims are just pure political propaganda, yet City Hall is about to spend $16,000 of your tax money on a survey postcard pumping that persuasion?

One more point. This is now the third Pasadena Star News article on the topic of moving the Sierra Madre Library and selling the current property to developers that interviews Rich Procter. Can it be he is one of the few people in Sierra Madre that Claudia Palma is capable of finding willing to discuss this topic?

So you know, the Pasadena Star News exists within a building owned by Singpoli entrepreneur Kin Hui, one of the more annoying stack and pack developers around this portion of the planet. Kin has proven in the past to be quite energetic in promoting pro-development media campaigns, even to the point of hiring former Pasadena Star News editor Frank Girardot to run his publicity operation.

Evidence that the fix really is in just keeps piling up.