Mod: In a Pasadena Star News article dated Oct. 3o something rather shocking got said. And it wasn't just that notion of razing the existing Library building and selling off the property, which is plenty shocking enough already. No, this wayward wonderment involved a need to raise taxes, an assertion made by Library Board of Trustees member Richard Procter that just might not be true. One possibly made to frighten people into making what many believe would be an awful decision. The article is titled "What questions will be on the Sierra Madre library survey?," and can be accessed by clicking here. Here is how it all kicks off. 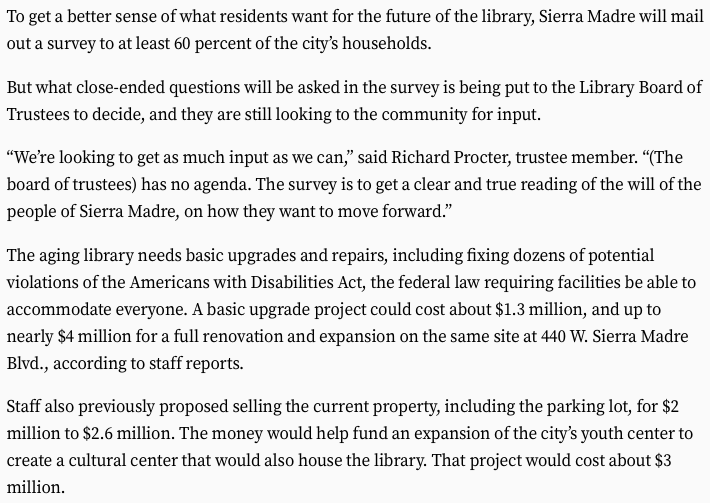 To claim that the Library Board of Trustees, which has come down firmly on the side of razing Sierra Madre's venerable Library and selling off the property in order to pay for a move over to the YAC, has no agenda does stretch the credulity just a little bit. Maybe only a mile. Things then got really wooly when Mr. Procter made this claim:

I certainly had never heard that one before. As is usually the case when I need some deeper understanding on an important City of Sierra Madre matter, I turned to City Manager Gabe Engeland for answers. Here is how he replied.

The initial discussion of this item at Council identified two paths, the "minimum" option and the "meaningful" option.  The minimal option would make the building safe, accessible, ADA compliant, and repair the roof, HVAC system, electrical, and windows. The meaningful option would include either expanding on site, in addition to completing all repairs, or moving the library to the YAC. I have not heard the option of tax increase coupled with the minimum option.  At the forum someone suggested a parcel tax to expand the library at its current site and not sell either parcel.  The majority of the discussion I have heard is on either moving with no tax increase or doing the minimum with no tax increase, but I am not getting nearly as much feedback on this item as the Library Board or the Community Services Commission.

Apparently the City Manager hasn't heard about any tax increases, either. Meaningful or otherwise.

What this does suggest, at least to me, is that Mr. Procter is playing a little Sierra Madre politics here. Tax increases have never been very popular in this town, and suggesting that repairing the current Library (as opposed to moving it), would result in more taxes could be upsetting some folks.

Should they be credulous enough to believe any of that stuff is true, of course.

What makes this even dicier in my opinion is that the Library Board of Trustees is also tasked with curating the theme and questions of the community survey postcard discussed above in the Star News article. A project that is supposed to help inform the City Council on whether to go forward with the Library move. Or not.

Does all of this seem a little overly complicated? Has the tangled web been woven enough for you yet?

I asked one informed resident about all of this and here is the reply I received via e-mail.

Regarding Procter's quote, I don't recall any resident every posing such a suggestion at the forum. Do you? Perhaps it was said at a council meeting. But I suspect not. I think this question is being posed from someone on the library board (or behind the scenes), and he or she is trying to make it sound like it is coming from the resident(s). Very underhanded.

I have not studied the budget, but I find it hard to believe that the library cannot afford the repairs and ADA upgrades. I think the idea of the repairs and upgrades were used as part of a pitch to "sell" the public on the idea of building a new center down the street.

It reminds me of the Kersting Court renovation project. All that really needs to be done is replace the rotten wood and fix some bricks. The rest is completely unnecessary. But in order to offer this "solution", it's easier to present a "problem" first.

Back when the library project was first presented to the council, selling the property was pitched as a way of avoiding a tax. But back then, no one mentioned that if we DIDN'T sell the property, we would possibly be taxed simply to repair and upgrade. Why wasn't this mentioned?

It's convenient to bring it up now, posed as a survey question. People don't want be taxed, so they will naturally pick the other option.

I think the article is a PR piece. They want the town to begin thinking about whether or not they want to be taxed. But the problem is: people don't understand how important it is to keep the city's land. It's a valuable asset. They also don't understand that the cost of building the center could rise, or that they could be taxed down the line to keep it going. I doubt any of that will be in the survey.

It’s clearly been some kind of development hustle from the beginning. That has been my opinion all along, and nothing has come along yet to change my mind. So who on that board has ties to real estate? Or development? That is the question that clearly needs to be asked now.

Since I doubt the Pasadena Star News will be covering that part of the story anytime soon, I'll have more on the matter soon.

The Library Board will determine the areas they want feedback on at their special meeting on Nov. 15th at 7 pm.

I do hope you will attend. Even if it is only to give them feedback they don't want.