Mod: There has been an atrociously huge amount of deceptive so-called "Affordable Housing Legislation" out of Sacramento over this last year, and it now falls upon the Planning Commission to interpret all of it from the Sierra Madre perspective. This is just their second go-around on the topic, and I doubt they will get finished tonight.

Below is a portion of the Staff Report for this item. You can link to it in its entirety by clicking here. This will make sober reading for those who have long hoped to maintain the small town character of the Foothill Village. And yes, this is a big deal. 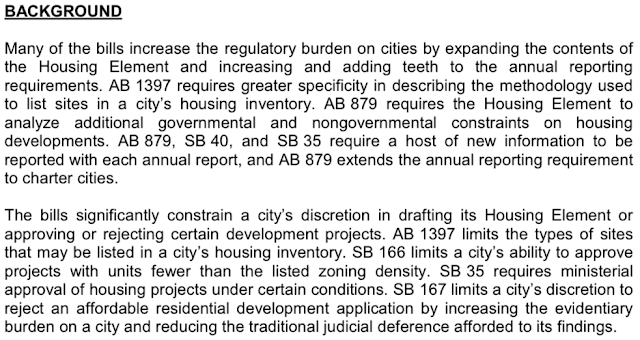 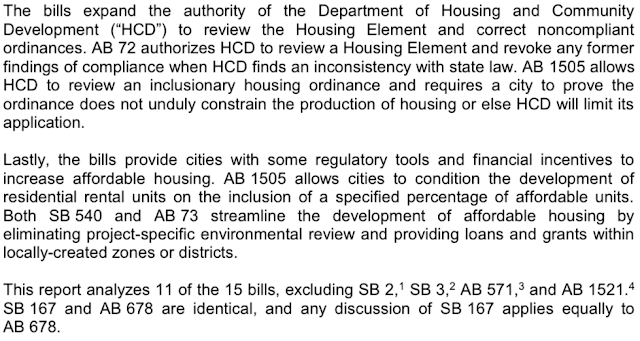 Here is a little myth busting for you. Affordable Housing is actually based on the median income of a city. In Sierra Madre the median income is slightly above $90K, so the earnings of those who would benefit from this new state imposed housing are actually rather high. I doubt very many have been dumpster diving lately.

So despite all of the sanctimony from Sacramento claiming it is all about housing for the poor and the homeless, what this will become in practice is out of character high density housing built in part with public money and sold for handsome profits to people who are prosperous by real world standards.

You can thank the developers and their very active lobbyists in our state capital for coming up with this self-serving little scheme.

A commenter begs to differ: FYI, income levels for state-defined "affordable housing" are based on area median income (AMI). The area in question is the county, not city. So we use LA County numbers, not Sierra Madre specifics. AMI for LA County is currently $64,300. Under state law there are various levels of affordability. Very low income is 50% of AMI, low income is 80% and moderate is 120%. The qualifying income also increases with family size. See https://la.curbed.com/2017/5/3/15539770/los-angeles-affordable-housing-income-requirements

Mod: That's why they put erasers on pencils.

Affordable housing defined (Sacramento Press link): Everyone wants "affordable" housing. But few people know what that is. The U.S. Department of Housing and Urban Development has defined affordable housing as no more than 30 percent of a household’s income. That means you shouldn’t be paying more than 30 percent of your income for housing — whether mortgage payments or rent — plus utilities each month.

Levels of affordability are also based on an area’s median incomes. The median incomes for Sacramento County, based on 2009 figures, are $50,950 for a single person, $58,250 for a two-person household and $72,800 for a family of four.