Mod: You know how it really works, right? This guy was beaten to a pulp by the Pasadena Police Department, and for whatever the reason. In the end it matters, but not the way you think.

Stick with me and I'll show you.

A disturbing citizen cellphone video emerges of the beating, and some people are upset. The PPD officers' many defenders claim it was justified, and that a police body camera video would show it. That video also emerges, and it is equally inconclusive and open to interpretation. The officers responsible remain on duty, and dubious cop union negotiated city administrative procedures guarantee that the officers continue to will slide by. Any actual consequences are negligible, and entirely hush-hush.

Meanwhile, the victim of this beating files suit, it goes to a local franchise of the Superior Court, and he will eventually win a large settlement. Right?

The officers get off and keep their jobs, the victim wins a lucrative civil suit, and the only people who are actually punished are the taxpayers. They're the ones who will have to pay. They always do. That's how it goes in the Rotten Rose.

Maybe that's what you get for not voting. Here are some news clips and reader comments that will show you how this rolls.

Cell phone video of violent arrest raises concerns about police use of force (Pasadena Weekly link): Civil rights advocates, police reform proponents and city leaders expressed shock and concern over a video that recently surfaced on Facebook showing a man trying to take away an officer’s baton before being punched, thrown to the ground and then beaten with that same baton.

At an emergency meeting of the NAACP Pasadena Branch Monday afternoon, members demanded to see video footage of the incident captured on body-worn cameras recorded by the two officers involved, the names of those officers, a copy of the police report on the incident, and an explanation of the department’s use-of-force policy.

The organization’s demands were turned over to the City Council during its regular Monday night meeting.

NAACP President Delano Yarbrough said he and other members found the officers’ actions to be “reprehensible” and “inhumane.”

“We are concerned that such treatment continues against people of color, especially black males,” said Yarbrough. 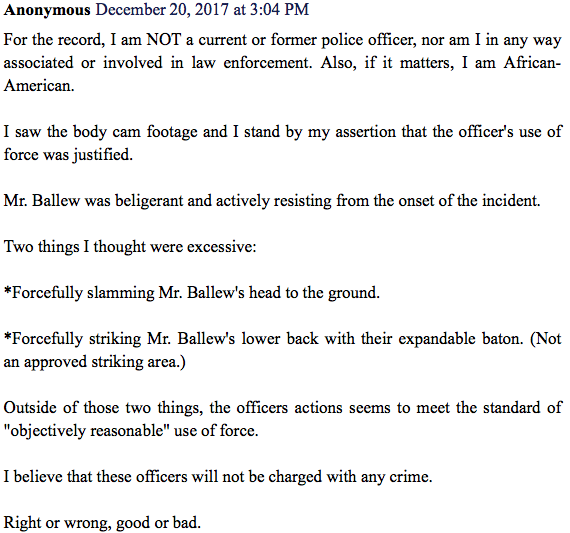 Spokesman Greg Risling said in an email Friday the D.A. declined to file a charge of assault on a police officer against Christopher Ballew, 21, “due to lack of evidence.”

Ballew was arrested in November following a traffic stop that turned into a confrontation with two Pasadena police officers.

Man Who Broke Leg During Arrest By Pasadena Police Speaks Out, Says ‘I Complied With Everything They Asked Me’ (KTLA link): The 21-year-old man who broke his leg during an altercation with Pasadena police in November spoke out Wednesday, saying he was compliant with the officers who were arresting him. Christopher Ballew appeared at a news conference about the incident that happened at a parking lot on Nov. 9, which the Pasadena Police Department said is under investigation  for possible "use of force."

The officers stopped Ballew because of a missing front license plate and tinted windows, according to a city spokesperson. Ballew's lawyer,  John Burton, named Jerry Esparza and Zachary Lujan as the officers involved.

"As far as I know, these officers are still patrolling, when really they should be facing criminal charges," Burton said at Wednesday's news conference.

Police said Ballew was resisting arrest and later booked him on suspicion of assault. But the Los Angeles County District's Attorney's Office has said it would not prosecute Ballew on any charges stemming from the incident due to lack of evidence.

After a  graphic cellphone video that captured the ordeal sparked public outcry, authorities released dashcam and bodycam videos that showed the moment Ballew's leg was broken.

"I was confused," Ballew said in the news conference. "I didn’t know what was going on." Ballew denied resisting and running away from the officers, saying, " I complied with everything they asked me."

Man whose leg was broken by police files claim against Pasadena (Pasadena Star News link): An Altadena man filed a claim for damages against the Pasadena Police Department on Tuesday following a November traffic stop in which officers broke his leg.

The claim states Chris Ballew, 21, sustained injuries to his left eye, cuts on his shin and a broken right leg. The filing, a precursor to a lawsuit, does not specify a dollar amount for the damages.

Ballew alleges officers Lerry Esparza and Zachary Lujan violated his civil rights by escalating a traffic stop into what he called a beating. Police have said Ballew resisted arrest and initially attempted to get him charged with assault on an officer.

A bystander’s video of the incident on social media sparked outrage and led to the release of additional footage from the officers’ body and dash cameras. At the time, City Manager Steve Mermell said he would reach out to the family, but family members now say they never heard from him. William Boyer, Pasadena spokesman, said Mermell left a message and never heard back.

Both Esparza and Lujan remain on duty, according to Boyer. An internal use-of-force investigation is ongoing and began immediately after the incident occurred, Boyer said.

"That's how it goes
In the Rotten Rose."