Sho Tay Censors a Discussion of Guns on his Arcadia's Best website, even though he deals in them for a living

A gentleman that I have come to know over the last few months posted the above question on Sho Tay's website, the at times oxymoronically titled Arcadia's Best.

As was recently revealed here on The Tattler, Mayor Pro Tem Sho Tay is a genuine gun dealer. And my concerned friend wanted to find out what this next Mayor of Arcadia thinks about semi-automatic weaponry and the role these things have played in the repeated slaughter of innocents. Such as what happened last week in Florida.

To give you some additional perspective, a New York Times article, titled "After Sandy Hook, More Than 400 People Have Been Shot in Over 200 School Shootings," appeared in that paper earlier this week. Here is the link that will take you there. Heavily armed madmen have declared a war on kids.

The screenshot at the top of this page shows the question my friend asked Sho Tay on Arcadia's Best. It seemed to me like a good one. As someone who is in the gun business, and is also about to become the next Mayor of Arcadia, Sho's opinions on this issue could be both insightful and beneficial to a lot of people.

Unfortunately, Sho Tay has not only refused to answer that question, but he also censored it from his website. It was never cleared to appear on Arcadia's Best. It's as if this deadly menace is of no concern there, with Sho not wishing to reveal any personal insight on an issue of singular importance today.

After hearing from my friend about his unfortunate experience there, I decided to do some research into Sho Tay's firearms business. The question in mind being why is he keeping this topic from appearing on his Arcadia's Best website? There must be a reason. Especially since Sho himself claims he never deletes comments from his site. Except that apparently he does.

There is a website link on the Merriwether page, and if you click on that you will be taken to the site for the La Puente Firing Range, which is Sho Tay's firearms business. You can also get to that site by clicking here. 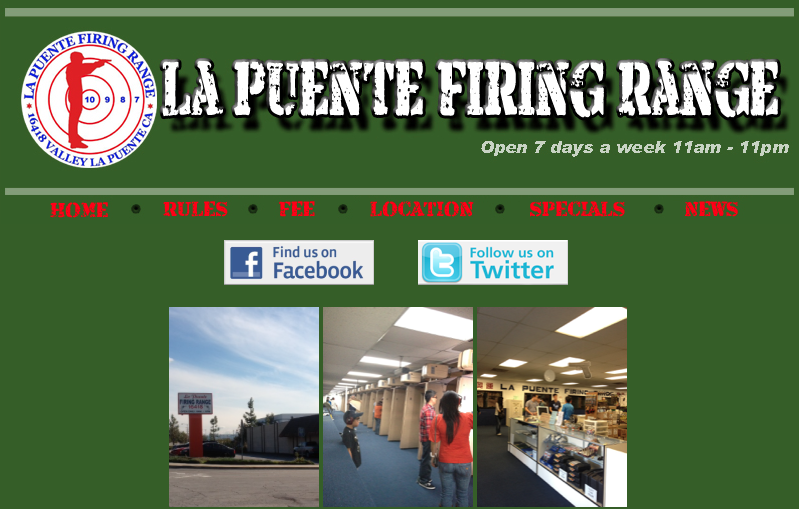 You with me so far? Good. While we're on the topic of tragedies involving weaponry, Sho Tay's gun business in La Puente has not been without a similar misfortune. The following comes to us from local daily the San Gabriel Valley Tribune (link).

La Puente Firing Range shooting death possible accident or suicide --- (LA PUENTE 5/12/2015): Detectives don’t suspect foul play in the death of a Walnut man found fatally shot at a shooting range Monday night. Investigators are looking at whether the death is an accident or a suicide, according to Sgt. Shannon Laren of the Sheriff’s Homicide Bureau.

Ed Winter, assistant chief of investigations and operations for the Los Angeles County Department of Coroner, identified the man as Ning Pan, 29, of Walnut. He said an autopsy is pending.

An employee at the La Puente Firing Range at 16418 Valley Blvd. found Pan around 9:30 p.m. He had a gunshot wound to the upper body, Laren said. He said the man was pronounced dead at the scene.

Obviously guns are designed to be deadly, and those who use them need to be extremely careful. Semi-automatic weaponry, such as the kind used at mass killings like the one that occurred this week at Parkland High School, is a particularly lethal category of firearms.

For some additional insight, here is how Frank Girardot, the former news chief at the Pasadena Star News, describes his experiences with the semi-automatic weaponry available at La Puente Firing Range. This following comes to us from his very serious sounding news site, SGVCrime (link). 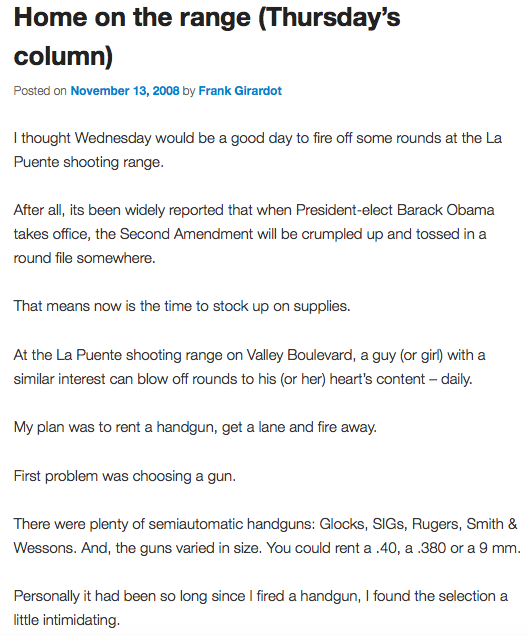 The rest of Girardot's article on his experiences at La Puente is available via the link provided above. As a side note, given the many gun massacres involving semi-automatic weaponry over the last decade or so, I wonder how Frank might feel today about some of the edgier viewpoints he expressed in his column.

Hopefully Sho Tay can now answer our friend's question, as posted at the beginning of today's article here on the Sierra Madre Tattler. It is never too late to do the right and honorable thing.