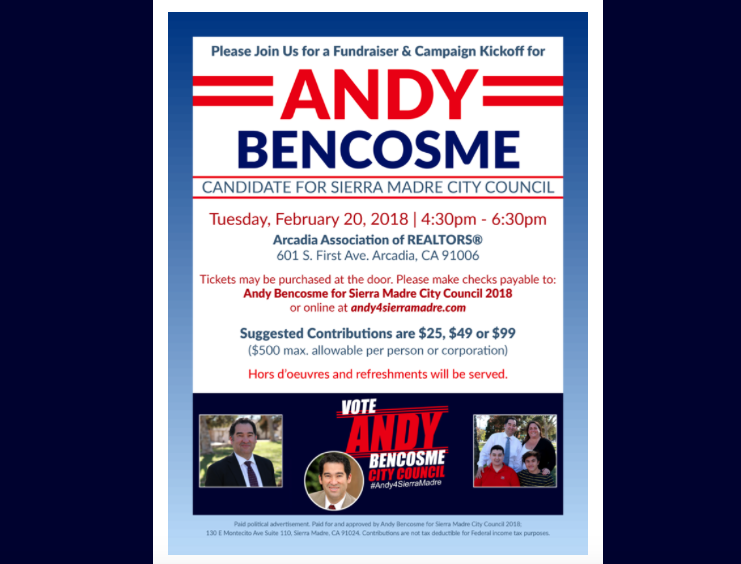 Carpetbaggers of the world unite! OK, that was far too easy. Let's get serious for a few seconds. This self-proclaimed MENSA guy, Andy Bencosme, is he really as sharp as some people claim he is? If you think so, let me ask you a few questions. Ready?

If you were running for City Council in Sierra Madre, and you happened to be a Century 21 Real Estate management guy of note, would you hold your big "campaign kickoff" fundraising event in the City of Arcadia? A place tragically afflicted with some very significant McMansion issues?

Would you be afraid that if your big event was held in Sierra Madre you might have to deal with some of the local riffraff? People you do not care to associate with too much? Or have to answer their annoying questions?

There is also this. Would you restrict your campaign kickoff event to people who for the most part do not even live in the city where you are running for office? While purposely excluding many of those that actually do? Would you do that? Is there a reason?

Look at the time this campaign kickoff event is taking place. 4:30 in the afternoon, and on a Tuesday. A time when most good Sierra Madreans are off somewhere else working for a living. Or fighting traffic on the freeways trying to get home. Or making sure the kids are doing their homework, while you are also cooking their dinner.

The people that invitation went out to are predominantly corporate Realtors and millionaire developers. People who have not always had the best interests of Sierra Madreans at heart. Folks who only see this little place as an underdeveloped, though quaint, housing market ripe for the taking. A city where they could make lots of money, if only they were given the free reign to do so. It is literally all they care about here.

So is this what Arcadia Andy's real constituency is? The people who he is running for office to represent? Big money out-of-town real estate and development players who only see Sierra Madre as a place to make a quick couple bucks in the bad neighbor housing racket? At the expense of the people who actually live here, and have for a long time?

Apparently, and sadly, that answer is yes.

Here is something else I should probably ask you. Would you have your event sponsored by an organization that has become notorious over the years for having worked to push high-density and McMansion development in Sierra Madre? A city that has prospered greatly by keeping that sort of predatory, and highly generic, development out?

That is what the Arcadia Association of Realtors has been about for years. It is the same organization that spent a fortune ten years ago to stop Measure V, only to be dragged to the polls by the people of Sierra Madre and soundly beaten. But had they won? Downtown Sierra Madre would now look exactly like any other town that had been sold out to Andy's supporters.

Sierra Madre has become a highly desired place to live and raise a family because it fought off those things. Property values here have risen to levels never before imagined. Why? Because this town stayed authentic. Generic McMansionization and stack/pack development were never allowed to set their roots here.

But both have long been advocated by the AAR and the people invited by Andy Bencosme to attend his Sierra Madre campaign kickoff event. Which is being held in Arcadia.

Attended by people who mostly don't even even live here. Yet each will gladly fork over a few hundred bucks to Andy Bencosme on February 20 because he will give them something that they have wanted for years. Unfettered access and the ability to to do whatever they want in Sierra Madre.

Quid pro quo. No matter what the likes of you might have to say about it.

It really is astonishing. Both crass and clueless, and at the same time.