Above is the "flip/flop" portion of Andy Bencosme's most recent campaign mailing. To go from being a leader in the effort to move the Library to the YAC as the head of an influential city commission, to the candidate now claiming that he wants to keep it just where it is now, is truly a quantum leap. But then some people will say or do anything to get elected.

You do know what the irony is here, right? Had Andy, as Community Services Commission Chair, opposed the process for moving the Library to the YAC a few months earlier, none of this would have happened.

However, and at the insistence of Andy, the Community Services Commission voted unanimously to further explore the option of moving the library. Which is why those survey cards went out, community outreach meetings were held, plus other unnecessary and costly things happened.

That was then. Now, because of his City Council campaign, Andy has emerged from his City Hall commission cocoon to mingle amongst the residents of Sierra Madre, people he had never really met before. And, quite suddenly, he has flip/flopped on a process that he himself bears a lot of the responsibility. If Andy had actually talked to real Sierra Madreans earlier, he would have known how unpopular this Library move scheme had always been, and perhaps none of this would have ever gone down.

This is what happens when you put people who are new to town, and don't really know very much, into important positions like Chair of the Community Services Commission. Bad and unnecessary things happen. Plus it ends up costing the taxpayers a lot more money than was really needed.

However, there is also a chance that Andy did not discover his sudden opposition to the Library move by actually talking to real Sierra Madre residents. Andy is mostly running a Facebook and mailer campaign, and has not spoken with as many residents as perhaps he should. As an example, at this year's fairly well attended Wistaria Festival outsider candidate Andy spent very little face time at the candidates' booth, while his three opponents hung out there for hours. Perhaps people are not really his thing.

I exchanged emails with City Manager Gabe Engeland about the possibility of Library survey data having leaked. I respect Gabe, and I do not envy him the job he has trying to keep this very challenging city moving forward. But he is someone who trusts people perhaps more than he should, and I believe Gabe may have missed something important.

Here is our question, and his answer.

The Tattler:  Is there any possible way Andy Bencosme could have known what the state of the groove is on the Library survey card results? Did somebody give him an early peek at some results? Does anybody know anything yet? Was there a leak? Would a leak have even been possible? What he says on his latest post card is the polar opposite of what he was aggressively pushing for as Chair of the Community Services Commission. It seems out of character for him to take such a position without having at least some foreknowledge of what is coming down.

City Manager Engeland: It is not possible that any Council Member or any Council Candidate has seen the preliminary results.  The research company is still finalizing their review and analysis.  My guess is this is just one of the topics residents are asking council candidates to state their position on as they campaign.

Gabe might be mistaken here. This is just a theory at the moment, so nobody should jump to any conclusions just yet. But this wouldn't be anything we haven't seen in Sierra Madre before, and do remember we are talking both politics and the possibility for developers to make big money should a predatory development candidate like Andy Bencosme get elected. You know how that goes.

It is true that the company hired to do this postcard survey, the National Research Center (NRC) out of Colorado Springs, has yet to put together their final findings on the desire of Sierra Madreans to move their Library into a gymnasium. The graphs haven't been designed yet, the final phraseology hasn't been curated, data hasn't been analyzed, the fine report book stapled, none of the stuff you'd expect when you shell out $18,000 for a research project of this kind.

But numbers apparently have been run, and as of March 6th actual raw data exists. Here is a memo from March 19 showing Sierra Madre's library survey cards were likely run though a tabulating machine by the NRC nearly three weeks ago. 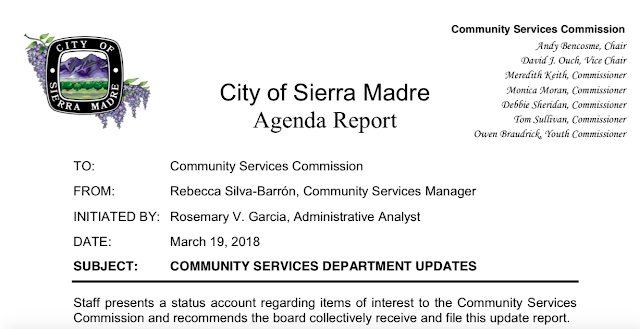 If Andy Bencosme did have this raw data from the NRC, it would give him certain political advantages. While the other three candidates still dutifully waited for the results, and therefore could make no conclusive statements about the fate of the Library, Andy would have been able to come out and take a position he already knew was in line with what the residents really want. Why? Because he saw the numbers. Even if it contradicted all he had done and said before.

I guess we now need to find out how many people at City Hall have been in communication with the NRC, and who might have leaked this information to the Bencosme campaign. Let's face it, City Hall is hardly the FBI, and I doubt anyone there discussed making Library survey tabulations a high security matter.

Maybe they should have, right? And look at it this way, now we know that most folks don't want to move the Library. We too might have the results. Just remember where you read it first.