The carelessly leveled charge of racism in beleaguered Arcadia is an unfortunate and sad tactic. That Sho Tay will not be raised to the office of Mayor until after the FPPC investigation into his alleged election corruption concludes is widely accepted by Arcadia's more temperate citizens. Yet there is a rather small and accusatory faction in town that would like you to believe he was at least temporarily denied the office due to racial animosity.

But this obvious red herring is hardly the real issue at work here. Rather it is a cynical political stratagem that is being used in hopes of defeating the opposition to mansionization and other forms of "Locally Unwanted Land Usages" (LULUs) in Arcadia.

Sho Tay sides heavily with these LULU developers and realtors, and this decidedly eclectic mix of selfish people are willing do almost anything to get him into the big seat. Even going to war with the people and government of Arcadia itself. Which they are now doing, and with a shrill vengeance.

Today The Tattler is taking you back to 2016 and a rather bizarre Pasadena land use controversy involving Singpoli's Kin Hui and a venerable YMCA building found there. A place Kin was widely suspected at the time of wanting to turn into yet another one of his ostentatious, bourgie hotels.

This rowdy rhubarb erupted on a Facebook page called Pasadena Politics, and featured a number of notable players, most prominently Kin Hui himself. It also starred his highly compensated publicist, former Pasadena Star News editor Frank Girardot. The fellow who has the job of enabling his boss's often loudly communicated will. More on that in a minute. 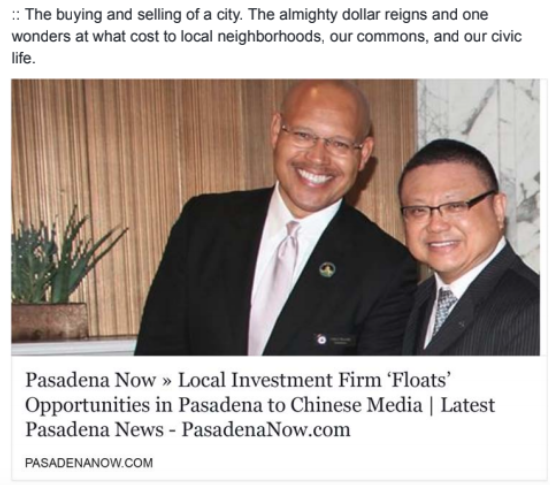 Singpoli, the Pasadena and Arcadia-based real estate investment, along with its joint venture enterprises, BDK Capital, and 8sian Media, brought together a powerhouse of Chinese media companies, including one of the country’s largest Asian-targeted multi-channel networks and advertising platforms, for the unveiling event.

Along with the sponsors came the 2016 eXin media delegation from China, comprised of executives and leaders from top-tier China TV stations and industry associations. The delegation came to “visit local companies and institutions, and to exchange innovative ideas about new media industry,” according to a group spokeperson.

Pretty pedestrian press release style stuff, right? A group of overseas investors had come together in Pasadena hoping to make a little dough in real estate. Pretty much what America is all about. Especially in an era when such investment has become universal, and anywhere money is to be made will do just fine.

However, there were a few associated local land use issues that had made some Pasadena preservationists uncomfortable, and they saw this an an opportunity to share their concern with the readers of Facebook's Pasadena Politics. This lead to a rather lively conversation about LULU real estate exploitation and overseas capital, which for whatever reason precipitated the colorful outburst from Mr. Hui we cut and pasted into the above left hand corner of this post.

Apparently Mr. Hui was not trying to up his Facebook friends count that day.

It was then that the dutiful Frank Girardot, perhaps hoping to get his volatile boss to chill, leapt in and attempted to seize an upper hand. Here are two of his comments.

Note the use of the phrase "coded words." Frank used it twice that day back in 2016.

Last week in the Kin Hui financed and owned publication The Hub, which lists Frank Girardot as its editor, the following verbiage was used to describe opposition to the allegedly corruption tainted Sho Tay becoming Mayor. The article was titled "Charges of racism, fraud fly at contentious Arcadia city council meeting," and you can link to it in its entirety here.

“If you choose to bypass the opportunity to have a Chinese-American as mayor, what will it say to the 60 percent of Arcadia residents who participate in this community’s successes?” Singpoli CEO Kin Hui asked. “Will it say to our children that Chinese-Americans are great members of the community, but have no business as community leaders? That would be shameful and go down as an historic blunder.”

Using colorful and sometimes coded language, a handful of residents told the Council that complaints about Tay’s tactics were too serious to ignore. “We the American People are here to ask the City Council to restore ethics to this chamber,” exclaimed resident Caroline Blake. “I say no to rotation, and to even one year with Sho Tay as Mayor.”

Frank, who apparently is an old dog unlikely to learn any new tricks soon, has returned to using the same spin he employed in Pasadena two years ago. That is to accuse the opponents of his boss's outsized real estate ambitions of racial intolerance through the use of the term "coded language." By which I am going to have to assume he means being racially intolerant without using any of the words normally associated with racial intolerance.

A conundrum for certain. Perhaps Frank is alluding to the Orwellian concept of "thought crime?" You can only guess. And yes, we all have to work for a living.

That article from The Hub is credited to one of the news writers there, a fellow named Hugo Guzman. Hugo also works out of Singpoli's 25 E. Foothill address.

However, given the usage of what is obviously a favored phrase and tactic, you would have to assume that this piece was heavily edited, if not entirely written, by Girardot himself.