Mod: One organization that made a big difference this election was Preserve Sierra Madre. The following email blast went out yesterday as the city awoke to some very great news. Sierra Madre has entered a new era, one where the preservation message is no longer a minority one. This is where the leadership came from. April 24 will be a big day.

Our congratulations go out to out-going Mayor Rachelle Arizmendi, Mayor Pro-Tem Denise Delmar and former Mayor Gene Goss. They all ran a great campaign and all their hard work and effort paid off in a resounding win.

Please join us on Tuesday, April 24th at 6:30 pm at the next City Council meeting to congratulate the three candidates and witness the formal installation of the new Mayor. It should be an exciting evening.

Our motto from the beginning was "why break up a good thing" and the voters saw fit to keep this City Council intact to continue their great work on behalf of all the residents of Sierra Madre.

Finally, a big thank you to all of our supporters who answered the call with your willingness to help make this result come to pass. You walked, you called, you allowed signs to be put up and most importantly, you voted!

Thank you for making a difference.  As always we appreciate your support.

Mod: You'd think that with the unofficial vote margin between Joyce Platt and Roger Chandler being razor thin this would be a matter of greater urgency than it apparently is for Arcadia City Hall. Check out this email sequence. The first has to do with the suspected sudden population explosion at disgraced former Mayor John Wuo's house. 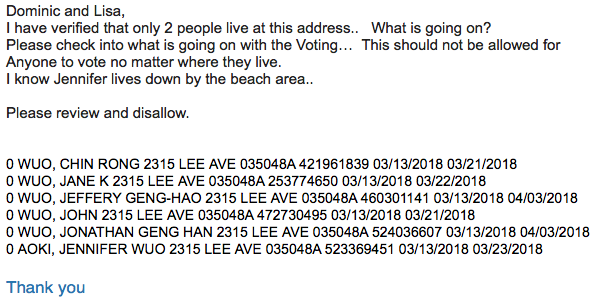 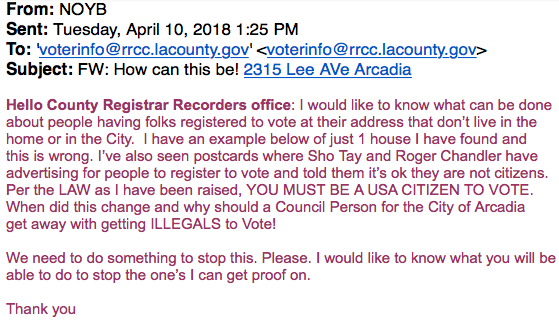 Mod: This is a story The Tattler will be following closely. You might want to jump in as well. I think if enough people start sending emails and making calls we might actually get some action. Obviously the election in Arcadia is not over.

Mod: There is a big article in today's edition of the Arcadia Weekly about Tuesday's election (link). Here is a part that jumps out.

However, the election is not yet over. Mailed ballots sent by Arcadians are still being accepted and counted, so long as they contain a postage stamp prior to April 10 and are received by April 13. The City Clerk’s office estimates around 500 votes have still not been counted, including expected mail-in ballots.

Mod: With this high number of uncounted votes, plus the now emerging story of possible voter fraud in District 5, Chandler's unofficial 45 vote lead could quickly evaporate over the next few days. Big story developing, peacock pals.