Sho's Woes: Sho Tay Supporters Demand the City Shut Down the Free Press in Arcadia for Reporting the News

Mod: As readers of this blog are aware, Arcadia Mayor Pro Tem Sho Tay is currently under investigation for possible California campaign law violations by the FPPC, and likely by the City Attorney as well for a rather broad Brown Act violation at last Tuesday evening's City Council meeting. This while Mr. Tay will also presumably face a vote tomorrow night by his elected colleagues on the council regarding his fitness to serve as Mayor. There have been a number of letters sent to City Hall by his supporters, three of which were forwarded to me. However, rather than discussing any of the reporting here or at the Arcadia Weekly on Sho's woes, the demand seems to be that the city shut down the local press for reporting news they didn't want to see.

I am writing to show discontent with current print of "Arcadia Weekly" story on "Councilman Tay".  This newspaper has continuously attacked the only Asian councilman on Arcadia council, providing info to mislead readers that Sho Tay is unqualified but never disclosed the contribution and work Councilman Tay brought to Arcadia Asian community. They have done it in the past and they kept doing it in every election. It's a strongly biased and discriminatory newspaper. Please disclose how much is City of Arcadia sponsoring this local newspaper to publishing biased newspaper. I, as a taxpayer, felt that we should not continuing sponsor such newspaper.

Mod: Here is the next missive.

I have noticed that Arcadia Weekly is not posting articles in a neutral manner. I don't understand why the city did not stop or warn this newspaper.

It has came to a point that makes me as a resident feeling sick and disappointed to see such a long time newspaper which represent Arcadia has made such unprofessional comments. Whoever is in charge of this newspaper should be warned and stopped immediately and apologize to wrongly accused victims.

Sho Tay did not divide the city, in fact he has pulled Arcadians together. It is Arcadia Weekly and Sierra Madre Tattler have divided the city. I strongly urged the city to take further action to these newspapers. 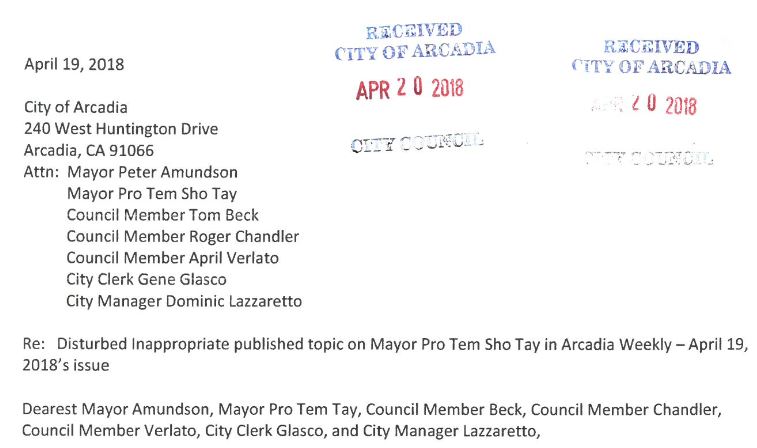 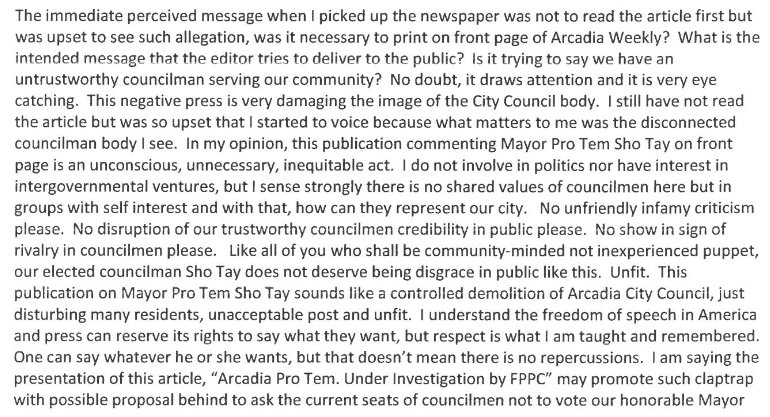 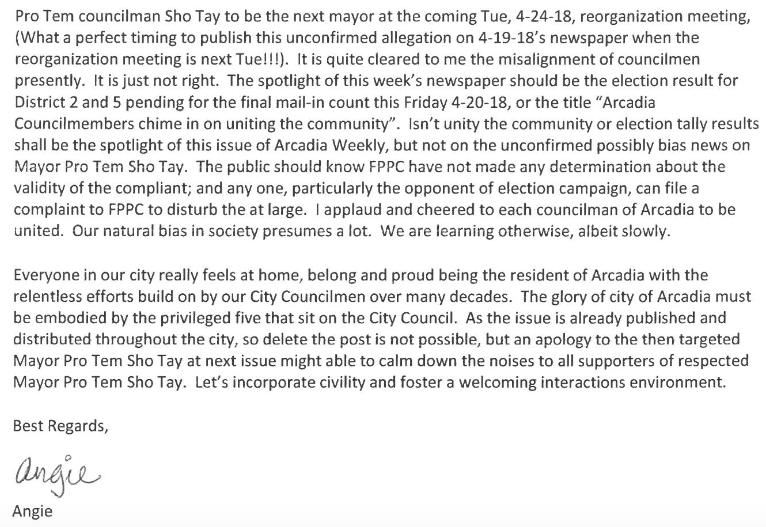 Mod: I can't speak for the Arcadia Weekly, but this blog will continue to post news as we see fit. The notion that certain Sho Tay supporters actually believe the City of Arcadia could send their police to a reporter's house and drag him off in handcuffs in order to, in Angie's words, "incorporate civility and foster a welcoming interactions environment," seems very Orwellian to me. Hopefully Angie has finally read the article that caused her to write so long a letter, and now understands the possible legal woes Sho Tay is facing. Also why these problems could make him an unsuitable choice for Mayor of Arcadia. There will be more news on the Arcadia situation tomorrow.