Sierra Madre Final Vote Is In - And Nothing Has Changed! 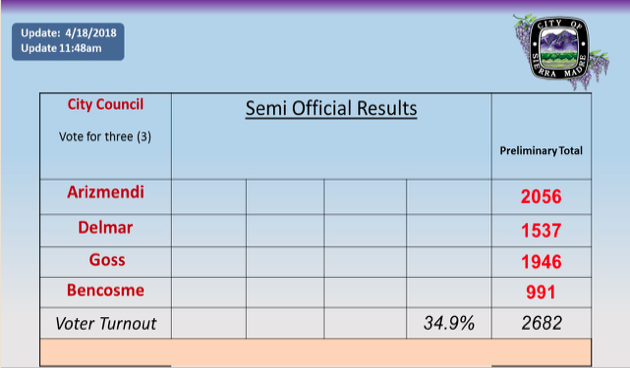 Well, OK, the numbers are a little larger than the last time we checked. It does look like Bencosme is going to remain stuck forever at just under the 1,000 vote mark. Which is kind of sad because even I broke that threshold. I think I was at the $5 a vote level. Modest by today's standards, though at the time it seemed like a lot.

However, I don't recall having had a budget of anywhere between $20,000 and $30,000 dollars. No, I know I didn't. We won't really know about Mr. Andy B's complete boodle for certain until sometime in July when final campaign financial disclosures will be revealed. And yes, we will find out. It is very important that we do.

Remember our latest Tattler aphorism: "The big money is in lying. Truth is for volunteers."

But I digress. These truly are great days for Sierra Madre. The city is in the best shape it has been in years, preservation is making regular work-a-day folks into home owning millionaires and, God bless us all, the voters have actually become smart enough to elect people who represent their interests. As unbelievable as that may have seemed just a few years back.

So, can we celebrate yet? Well, I am happy to tell you, folks are getting ready for that. The political juggernaut previously known as Preserve Sierra Madre (actually, they still are), sent out the following email blast yesterday. For people who worry so much they sure do sound happy.

Dear Supporters: There will be an installation ceremony for the new Mayor of Sierra Madre at the next City Council meeting on Tuesday, April 24th beginning at 6:30 pm.

We are very pleased and excited at the re-election of the three candidates endorsed by Preserve Sierra Madre: current Mayor Rachelle Arizmendi, Mayor Pro-Tem Denise Delmar and former Mayor Gene Goss.  They have done an outstanding job in their four years on the City Council and we expect the same from them over the next four years.

All of you made a difference in this election and helped to make this day possible so it might by fun to attend this event.  The formal presentation will occur towards the end of the meeting and refreshments will be served in the City Hall reception area immediately following the City Council meeting. We hope to see you there!

Thank you for your support. Steering Commiteee

Did you see that? The word committee had three e's at the end. I'm telling you, I have never seen them so wild before.

For those of you who enjoy walking on the analytical side of life, I was on an e-mail chain yesterday where they broke down the vote totals in some surprising ways. Or at least I was impressed.

Another interesting fact: Many ballots had only two votes, Denise and Andy.  And, many had single votes --- most of those were for Delmar. Of the vote by mail ballots, the County invalidated 10.

There were an additional 7 with no signature. Laura contacted those folks and got signatures from 6. And, all in all, only 12 ballots were not counted, those were for signatures that didn't match the registration. People who say that elections are not on the up and up need to take heed. I think Sierra Madre has the fairest elections anywhere.

Many ballots voted yes on Measure D and didn't vote for the council candidates. But the no votes got 81.7%; Yes 18.2%

You know what? Somehow all of this makes me happy.

Mod: I know. You might find yourself wondering, am I reading The Tattler? But this really is more good news. Remember the conversations here recently about some impending Sacramento high density housing development mandates, and how even Sierra Madre's funky little bus station by Kersting Court might have become the cause of some big LULU (Locally Unwanted Land Use) development? Well, all of that misery died last week. Here is an article you should enjoy.

Senate Bill 827, which would have forced cities to allow taller, denser development around public transit, got only four votes on the 13-member Senate Committee on Transportation and Housing. Both Democrat and Republican lawmakers voted against the bill.

Authored by state Sen. Scott Wiener, Democrat from San Francisco, the bill would have allowed developers to build five-story apartment buildings near major public transit stops, including neighborhoods previously zoned for single family homes. The bill received a ton of media attention, including a fairly flattering write-up on the front page of the New York Times.

Urbanist “Yes In My Backyard” (YIMBY) groups mourned the bill’s death as yet another roadblock to building the new housing the state so desperately needs. Cities and anti-gentrification groups cheered the demise of what they viewed as an unprecedented inroad on local control.

Mod: Too much joy, I'm telling you. The rest of the good news is available at the link.