Stop the Vote Count! Is There an Election Landslide Going On at Johnny Gemcoins' House?

Mod: This showed up in my electronic mail yesterday evening. Allegedly there has been a sudden population boom at disgraced former Arcadia Mayor John Wuo's domicile. This being Johnny Gemcoins Wuo, if you're into name-dropping.

Jennifer is his daughter, who is married and lives elsewhere. Jane Wuo is John’s wife. Jonathan is his son who is also seems to have moved out. His Facebook page indicates he now lives in Pasadena, not Arcadia. The other 2 are believed to be John Wuo’s parents who apparently don’t chill there with him, either. What this means is there are six votes total coming out of a house where only two people are living the empty nest lifestyle. Judging by the lawn sign outside, that means six votes for Roger Chandler.

Mod: It appears six votes were cast from a household of two. The count is as follows:

I can tell you one thing for certain. Not all of those votes are backed by amber mines.

Every time an election rolls around a certain individual invariably leaves their detailed election prediction in the comments section of this blog. And he is usually pretty accurate.

So in the interest of filling up the remaining space on this page with something moderately interesting, here is how our comment section correspondent is calling today's Sierra Madre voting horserace. Check back this evening to see if he actually knew what he is talking about. And do remember, please bet responsibly.

Ballots returned through today indicate that turnout will be 10% lower than in 2016.

In 2016 3,000 people voted and this time we are on track for 2,700. Predicting that 1,200 absentee ballots will be counted tomorrow followed by 1,200 polling place votes followed by 300 or so absentee ballots counted next week that were mailed in tomorrow or turned in at the polls on election day.

Goss and Arizmendi are in a battle for first place (in 2014 Goss beat Arizmendi by 38 votes). Arizmendi will likely beat Goss this time around because the advantage he had in 2014 (he had name recognition from his failed run in 2012) is no longer a factor and Goss has been significantly out-mailed.

Measure D will get only 23% of the vote and fail. Our long local nightmare will be over very soon.

Why Does Arcadia Andy Hate Commuters?

Mod: This was probably the weirdest postcard to go out this election. Because you commute to work you apparently are not to be trusted because of all the distractions. There must be a lot if untrustworthy people in town.

So a good reason for voting for Andy Bencosme is because he hangs around town day and night? What does he do with himself all that time, eat ice cream? 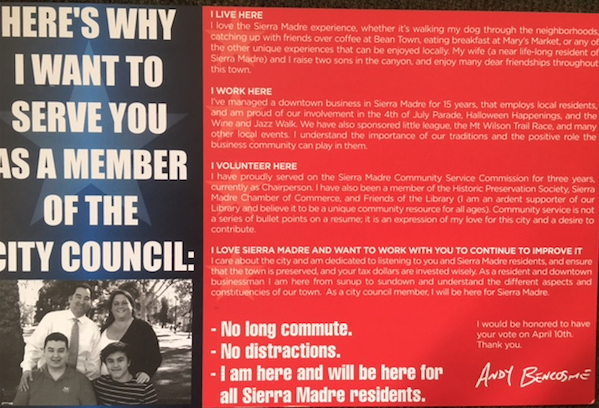 One other thing. Andy describes himself here on this postcard as being a "local businessman." What he actually does is run the local Century 21 real estate office downtown. Something that he never once cared to share with the voters. Why is that? Is he ashamed of what he does for a living?