Mod: We like to catch up with former Assemblyman Tim Donnelly occasionally, mostly because he is quite a colorful character. Tim, who you will recall once upon a time represented Sierra Madre and other area communities in Sacramento for a couple of years, is apparently going to war with both Mexico and California in just two weeks. Very ambitious of him for sure. The following came to my attention via an email blast from the news site Politico.

THE BUZZ: If there's any doubt about how Donald Trump's tweetstorm slamming California and Gov. Jerry Brown on border and immigration issues is playing with his base, look no farther than the email from Tea Party darling and former state Assemblyman Tim Donnelly, which hit inboxes around California Thursday, headlined "CALLING ALL MINUTEMEN."

THE MESSAGE: "Dear Patriots, If you believe that our borders should be secure, laws enforced and immigration a controlled, orderly process, then Gov. Jerry "MoonBeam" Brown thinks you're a 'low-life' that should 'chill' out and just accept that millions of illegal aliens are here....THE TIME FOR TALK IS OVER..."

DONNELLY, who's mounting a CA-08 primary challenge from the right to GOP Rep. Paul Cook, challenges conservative and "patriot" voters to "send a message to "MoonBeam" that you refuse to allow him to turn our communities into cesspools and sanctuaries for illegal alien criminals." Their plan: to amass at a designated border location about 70 miles from San Diego on the weekend of May 5-6. He says the response has been "overwhelming."

Mod: This sent me scrambling to Google News to find articles I could cite here, but ironically the only one in existence was from the Spanish language newspaper La Opinion. I ran it through Google Translator for the benefit of The Tattler's Anglophone readership, and this is what emerged. It is certainly not flattering to Mr. Donnelly.

Candidate to the Congress of the United States summons to "Patriots and Minutemen" to watch the border (La Opinion link): Tim Donnelly, an ultra-conservative congressional candidate in San Bernardino, California on Tuesday, called on anti-immigrant militias to make a symbolic effort on the border on May 5. Donnelly, a former tea party candidate and self-appointed "Minuteman leader," apparently wants to revive the movement that exactly 13 years ago captured the country's attention by sending thousands of volunteers to "patrol" the border to stop undocumented immigration .

In a statement from his campaign, Donnelly called for the revival of controversial militias, after California Governor Jerry Brown decided not to send the National Guard to the border while its mission is related to immigration.

"Since the illegal Governor Brown has decided to side with the criminals and ignore President Trump's call to send troops to the border - by threatening our communities," the people must resist this tyranny, " Donnelly said.

The Republican candidate for Congress for District 8, occupied by Republican Paul Cook, called on "all Minutemen and patriotic groups to come to the aid of their country and do the work that the irresponsible Governor Brown has refused to do." 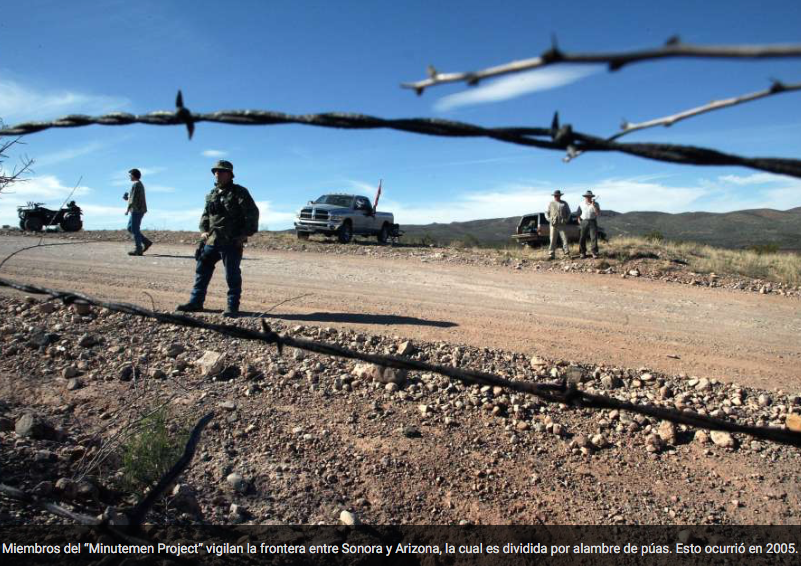 The call is for next May 5 - a day of celebration for the Battle of Puebla in Mexico that is symbolically celebrated in the United States - and supposedly aims to summon supporters of the anti-immigrant movement in the town of Boulevard, California.

But instead of summoning militias to stand for a long time on the border "to help the Border Patrol", Donnelly plans an only one weekend mobilization, to send a message to Governor Brown.

"Let the cartels and criminals who want to penetrate the border know that from 9 am on Saturday May 5 to 9 am on May 6, the border will be safe," he said in the statement.

Despite his self-definition of "Minuteman Leader," Donnelly was not among the actual leaders of the vigilante movement, which was rejected by the leadership of both parties but later won the sympathy of some politicians like Arnold Schwarzenegger, when he was a candidate for governor of California.

The intense media coverage that the movement obtained in 2005, driven by the anti-immigrant sentiment that followed the terrorist attacks of September 11, 2001, had its effect on national politics and ended with the temporary sending of national guard troops to the border by George W. Bush.

Donnelly, on the other hand, has lost more elections than he has won, although he served as an Assemblyman from California between 2010 and 2014, before submitting his candidacy for governor, which he lost in 2014.

For its part, the Minuteman movement and some of its leaders at the time are given credit for the anti-immigrant movement that followed their training and even for the phenomenon that elected Donald Trump. Recently, Jim Gilcrist, former leader of a Minuteman faction, said in an interview with Vice that his movement was responsible for raising the issue of immigration to a prominent place in US politics.

In reality, the Minuteman movement ended up dissolved and divided, and at least two of its leaders were imprisoned for various reasons. For example, Chris Simcox, founder with Gilcrist of the initial movement, was imprisoned in 2013 for sexual abuse against three girls, including his own daughter.

Shawna Forde, Arizona's Minutemen leader was sentenced to death for the murder of Brisenia Flores, 9 and his father Raúl, in a trailer near the border in 2009.

There were also multiple allegations of fraud against Minuteman leaders for funds sent by citizens to "build a wall on the border" that was never built.

Mod: There's no doubt that one of these fellows wanting to have sex with his own kid is disturbing. But as long as we're also speaking of fraud, did any of these Minutemen ever claim that Mexico was going to pay for their version of the wall?