It isn't the kind of thing you usually see in bucolic Sierra Madre. Downtown Los Angeles perhaps, or maybe some place like Anaheim. But here? Across the street from City Hall, and in front of the much celebrated The Kensington Sierra Madre? No, not what people around here expect to see while driving their kids off to school.

The picketers are from the Carpenters Union Local 209, and according to the flyer I was given their grievances are a quite serious. I took a picture of it and I am posting it below. Interesting that they call out Billy Shields. They even refer to him as an enabler of wage theft. Billy was quite affable when he was here pushing to get the place built a few years back, so this is all something of a surprise. 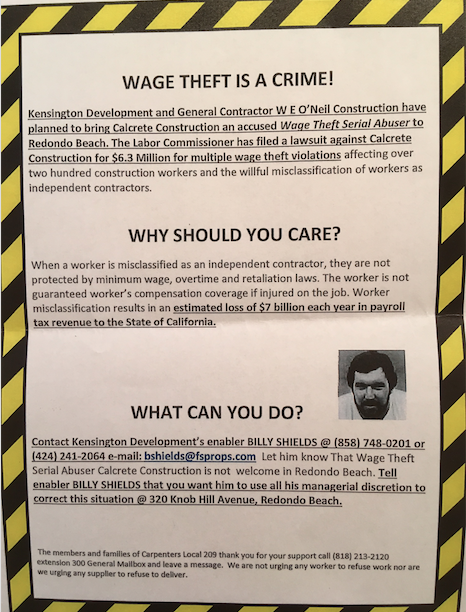 Pretty serious accusations as far as I can tell. It is hard to believe the Kensington folks would be involved in such shady labor shenanigans, but that is what the Carpenters Union is saying. And apparently they feel quite strongly about it.

Back in March of this year the Mountain Views News covered a similar Kensington picketing. The prognosis was much sunnier than what I heard from the union guys yesterday. Here is how Susan Henderson viewed what was going down. 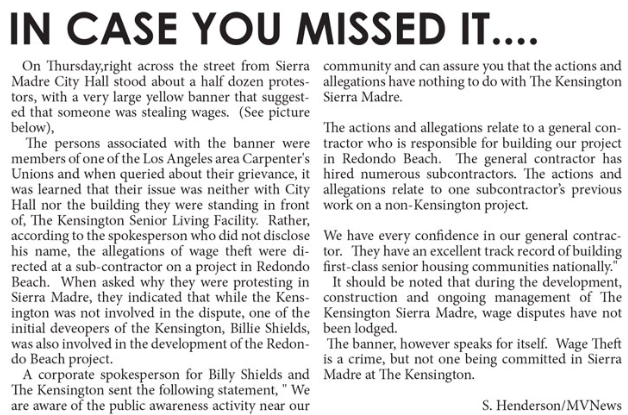 I don't want to appear too cynical, but maybe that is the kind of favorable coverage you get in The Mountain Views News when you buy a lot of advertising space.