The Border Rally: Just How Politically Far to the Right is Voice of Arcadia?


They will have the usual touchingly naive supporters of Sho Tay out tonight at the City Council meeting, haltingly delivering talking points the secretive Voice of Arcadia leadership will have prepared for them to read from their cell phones. A large portion of which will be about how intolerant the Arcadia Weekly and Sierra Madre Tattler are because they don't worship that doyen of mass mansionization, Sho Tay, with quite enough righteous fervency for them.

Crimes for which, in their opinion, such newsers must be shut down by Arcadia City Hall for their deviations in thought, and then banished forever.

Pretty radical stuff, yes? But is it leftwing radicalism, or rightwing radicalism? Judging by what can be found on the Voice of Arcadia Facebook page, you're going to have to assume that we're talking about the latter. Especially given their rather fulsome support for political demagogue Travis Allen and his campaign for Governor of California.

Just how reactionary is Travis Allen? Well, if you travel down to the Mexican border on May 27, you will be able to check out Travis in action for yourself. Whipping up a little old time race baiting nativism and fear of immigrants just so he get himself a few votes. 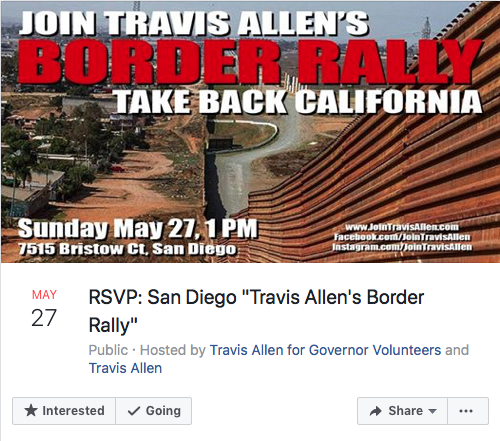 Are we to assume by their fulsome support of Travis Allen that the anonymous folks behind Voice of Arcadia don't like their neighbors of Latin American origin very much? Are they bigots? Talk about your pot calling the kettle black. Can it be that here we have yet another instance where those pointing fingers are guilty of the very things they accuse others?

In an op-ed piece titled "The California governor's race has its own version of Trump. Let's not let history repeat itself," here is how the Los Angeles Times (link) describes Travis Allen and, by inference, those who support him. You know, people like the secretive folks behind Voice of Arcadia.

Before launching his campaign for governor last year, Assemblyman Travis Allen (R-Huntington Beach) was a fairly ordinary legislator. Republican, but not in a rabble-rousing kind of way, and seemingly willing to work across the aisle to get things done. His first attention-getting legislation was a bill he co-authored in 2013 with a Democratic colleague to stop the South Coast Air Quality Management District from banning beach bonfires.

But now he's running for governor and he's changed. Last year, for example, when the Democratic-majority Legislature passed a bill to stop police from arresting children on charges of prostitution, he wrote an overwrought article suggesting that the state had legalized child prostitution.

Needless to say, that was not the case. The bill didn't make it legal for an adult to have sex with a minor, and Allen knew it. It merely declared that kids who were being sold for sex should be treated as victims rather than criminals.

But Allen clearly felt that his assertion, true or not, would feed a belief about out-of-control liberals held by the "silent majority" of conservatives he thinks exists — and would motivate them to vote for him in the June 5 statewide primary. It was part of a strategy he has followed since then of tapping into fears, making false claims, demonizing certain groups of people and promising things he can't possibly deliver.

Politicians have, of course, always done such things to one degree or another — and we would never suggest that Allen is the only demagogue out there. But these days, in the aftermath of the November 2016 election, it no longer makes sense to ignore such irresponsible campaign behavior or to view it as the domain of only fringe candidates hoping desperately to get attention.

Hmm. "Demonizing certain groups of people," "tapping into fears," "making false claims." Yeah, I can see why Voice of Arcadia would be into old Travis. He is definitely their kind of guy.

This from the Sacramento Bee (link):

On Friday, Allen was named in the Legislature’s release of sexual harassment investigative records. Allen, who the documents show was given a verbal warning but not disciplined in 2013, was accused of sliding his foot over to touch a female employee, and coming up behind her in the cafeteria to squeeze her shoulders. While Allen strongly disputes that what he did was inappropriate, the political fallout was swift. Republican Assemblywoman Melissa Melendez, the author of a long-stalled whistleblower protection bill signed by Gov. Jerry Brown, informed Allen that she was pulling her support.

“I have no choice but to withdraw my endorsement of his candidacy,” Melendez told reporters after reviewing the claims.

Does Voice of Arcadia support work place sexual harassment, too?