Mod: It hasn't been all that good week for Donald Trump. Here is one of the reasons why things have been going so badly lately. It will only get worse.

Top Republican Senator Says ‘No Reason to Dispute’ That Russia Favored Trump (The New York Times link): The Republican at the helm of the Senate’s investigation into Russian interference in the 2016 presidential election backed on Wednesday the assessment by American intelligence agencies that Moscow favored Donald J. Trump in the race, contradicting both the president and fellow Republicans in the House.

Senator Richard M. Burr of North Carolina, the chairman of the Senate Intelligence Committee, said in a statement that he saw “no reason to dispute” the intelligence assessment, which was delivered in the final weeks of the Obama administration.

Mr. Burr’s statement, while indirect, offered a clear rebuke to Mr. Trump’s most ardent supporters in the Republican Party and in the right-wing news media, who have sought to cast the assessment as the shoddy work of Obama loyalists bitter over Mr. Trump’s election victory. Russia’s only goal, those supporters have insisted, was to sow chaos, and thus it could not have colluded with a campaign it cared little about.

The only logical conclusion, they contend, is the one that Mr. Trump has already reached: The investigation led by Robert S. Mueller III, the special counsel, is a “witch hunt” cooked up by Democrats desperate to undermine a president they detest.

American intelligence officials, including Mr. Trump’s own appointees, who now run the agencies that compiled the assessment, say otherwise. They have repeatedly backed the work of their predecessors and sought to shield Mr. Mueller’s investigation from political attacks.

Asked at a Senate hearing on Wednesday if he stood by earlier statements that the special counsel’s investigation was not a witch hunt, Christopher A. Wray, the F.B.I. director, did not hesitate: “Yes,” he said.

And now, the intelligence assessment on Russia’s interference has the support of Mr. Burr, who said Wednesday that his committee was also continuing to investigate whether there was any collusion between Mr. Trump’s campaign and Russia. Examining the assessment was only the first step, the committee said.

“Committee staff have spent 14 months reviewing the sources, tradecraft and analytic work, and we see no reason to dispute the conclusions,” Mr. Burr said in the statement. “There is no doubt that Russia undertook an unprecedented effort to interfere with our 2016 elections.”

The Democratic vice chairman of the committee, Senator Mark Warner of Virginia, added, “The Russian effort was extensive, sophisticated and ordered by President Putin himself for the purpose of helping Donald Trump and hurting Hillary Clinton.”

How Mueller’s First Year Compares To Watergate, Iran-Contra And Whitewater (FiveThirtyEight link): It’s a big day for Robert Mueller and his team: One year ago today, Mueller was appointed to lead the special counsel investigation into possible ties between the 2016 Trump campaign and Russian officials.

It’s a miracle, in some ways, that Mueller has lasted this long. President Trump’s relationship with the investigation has grown increasingly adversarial, and at many moments over the course of the past 12 months, it seemed like Mueller’s job was in jeopardy.

So this hasn’t been an easy year for Mueller, but it’s certainly been productive. Since the first indictments came down in the investigation last fall, the special counsel has racked up five guilty pleas and 14 indictments of individuals.1 He also reportedly gave a referral to the U.S. attorney’s office for the Southern District of New York that led to a raid on the office, home and hotel room of presidential lawyer and fixer Michael Cohen, which has turned into its own separate investigation.

We’ve taken a look at how Mueller’s first year measures up against the initial 12 months of other special counsel and independent counsel investigations. In terms of the number of charges he’s been able to file, Mueller is moving quickly. At one year after the formal appointment of a special or independent counsel, only the Watergate special prosecution force had obtained more indictments and guilty pleas. 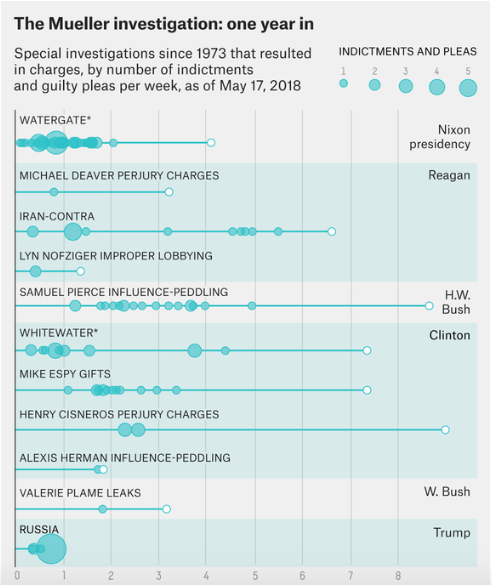