The Sierra Madre City Council is voting tonight to spend $947,000 on a water meter system

Before I get started on the topic du jour, I did have a question recently for City Manager Gabe Engeland on the only somewhat forgotten topic of those Library survey postcards.

I personally believe that a consensus of all the rumors states the survey results for moving the Library to the Youth Activity Center were not quite as enthusiastic as certain parties might have hoped, and their silence has since grown kind of deafening. Especially when compared to all of that wild noise they had been making. Apparently the cheerleaders have taken their pompoms and gone home.

Tattler Enquirer: Anything new on the Library survey cards?

City Manager Gabe Engeland: The library survey is currently set for discussion at the second Council meeting in May. The final draft is being finalized right now.

I then asked Gabe if he might share any of the results with me, and he demurred. Apparently announcing that is a Mayor leadership function and we're all going to have to wait until May 22nd. I suggest board games to help pass the time spent waiting.

Back to the advertised feature. So here is my question. Why is the City spending $947,000 on "smart meters" rather than using the money to pay down the water bond debt, or buy some more of those fine modern pipes? I did ask the City Manager that yesterday, and I haven't heard back yet.

Which is fine, I guess. So loaded a question probably cannot be answered that quickly. Besides, Gabe just got back from the SCAG meeting, and there is all of that new received wisdom from Hasan Ikhrata to grapple with. I hear the Man from Moscow took yet another stab at predicting the future, and who knows? Maybe this time he finally got it right.

Here is what the agenda item for these water doohickeys actually looks like (link). 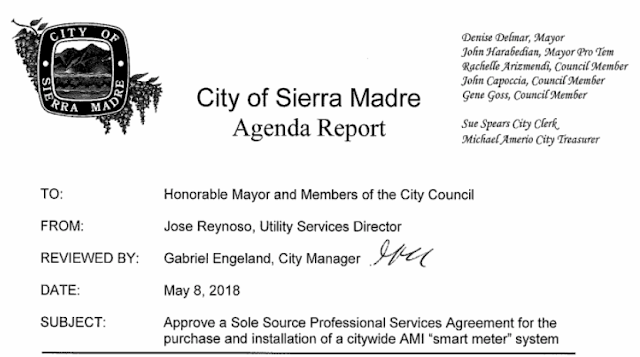 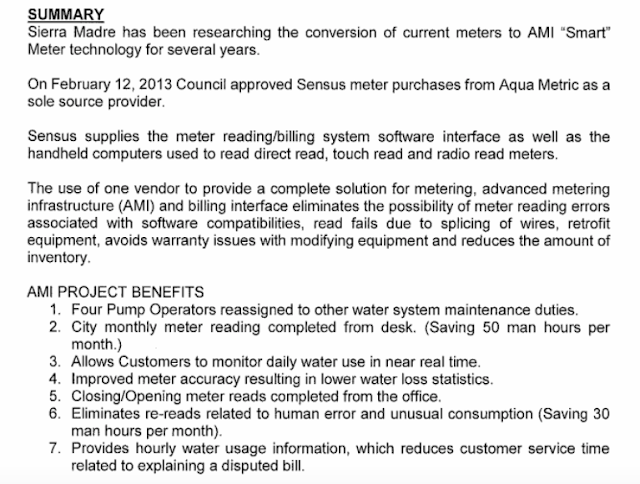 While those are no doubt fine reasons for spending close to a million dollars that the City of Sierra Madre's heavily indebted water enterprise is not supposed to have, it really is a lot of dough. Especially after that seemingly endless series of water rate increases the consumers of the wet stuff have endured over the last decade or so.

And while there is no doubt that reading water meters from the comfort of an office somewhere just cannot be beat, shouldn't those past messes be cleaned up first? You know, before the water guys are allowed to get all Jetsons on us?